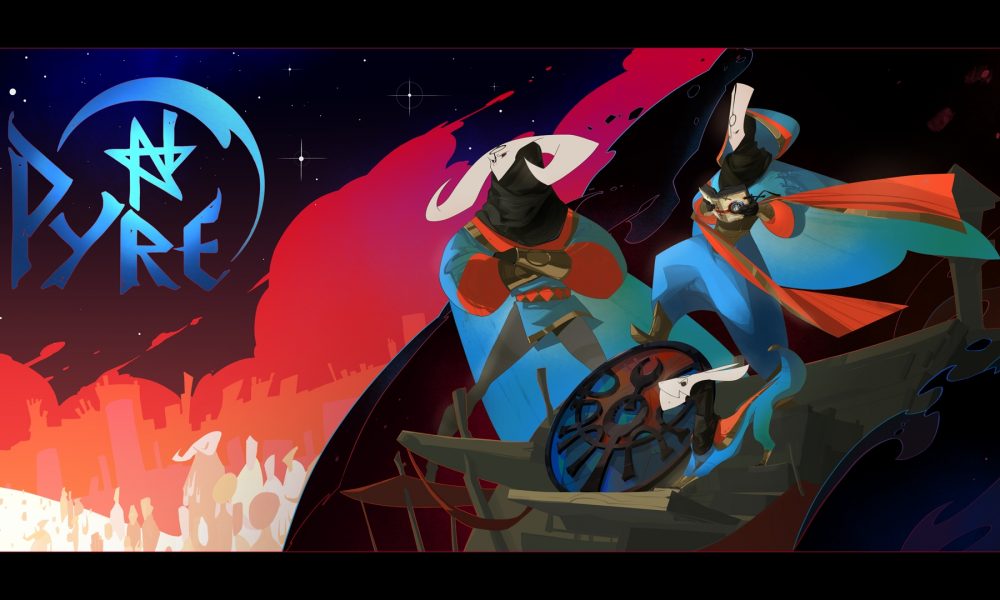 On the surface, Pyre is a beautiful game. Scratch anywhere past the surface, and there’s really not much to find.

Pyre comes to us from SuperGiant Games, the developers behind instant classics Bastion (2011) and Transistor (2014). But where Bastion and Transistor combined gripping stories and fun gameplay, Pyre only brings one of the two. And it can get tedious. Per SuperGiant Games, Pyre is a “party-based RPG in which you lead a band of exiles to freedom through an ancient competition spread across a vast, mystical purgatory.” Really, though, it plays like a Visual Novel with RPG elements.

You play as the Reader, exiled from The Commonwealth to The Downside, who possesses a forbidden talent that allows her to not only read words but the stars. Through reading the stars, you’re able to lead your band of exiles (‘The Nightwings’) to freedom, one at a time. Along the way, you stop through twisted storybook-like lands where you run into other Triumvirates (bands of exiles) and challenge them to The Rites, which functions as Pyre’s gameplay mode. You start with three exiles to work with, but soon you are able to pick up more. Each exile is of a different class, possessing different skills usable in The Rites.

The main issue with Pyre is in The Rites. The game mixes elements of basketball and football, where you have to claim an orb lying in the center of the court and run it into the other team’s pyre. Each character casts an aura, which banishes an enemy for a few seconds if they get touched. An exile’s aura can also be focused and shot out, banishing any enemies in its path. This is where the ‘party based RPG’ comes into play, as each match is a 3v3 battle.

This is where things get dicey. It doesn’t work so well as a party based game. You can only control one exile at a time, so when you’re using one the others are left standing still, completely exposed. You can switch between exiles, but once you do the one you were controlling is almost immediately banished. The frustration with this doubles down when carrying the orb, as the only way to switch to another exile is to toss them the orb, again leaving the previous orb-carrier exposed.

The problem with this is that the game becomes more of a 1-exile show, and it becomes really easy to exploit certain characters. Some exiles can simply run around and dive past enemies into their pyre, with no real way to defend against it. The gameplay gets repetitive quickly– probably why you spend most of the game reading rather than playing. It seemed like the game was more about getting a quick first kill, then grabbing the orb with a faster character and diving in. The Rites give an unrewarding feeling when you win and an overwhelming feeling of frustration when you lose. I felt every time I scored I simply used an exiles sprint to run past the other team into the flame, and when I was scored on it was because the other side did the same. It didn’t feel like strategy or teamplay. After 5 or 6 matches I was only doing the Rites to progress further into the story.

Pyre is more story-focused than its two predecessors but somehow manages to tell less of a story. It’s by no means bad, but even though the story takes up most of the game it doesn’t feel as important; it doesn’t draw you in. There aren’t any real antagonists– each enemy team is lead by an exile who has a problem with one of your exiles or your whole team in general, but you don’t see enough of any of the enemies to care much about beating them. It felt weird that all the other Triumvirates are led by actual criminals who committed crimes for personal gain, while The Nightwings are composed of exiles who are all wholesome and righteous, who only committed their crimes for seemingly good reasons.

As you progress you learn more about each character and more about the world you are living in. The Book of Rites teaches you about each group of exiles, along with the backstory of The Downside. The Book of Rites does well to supplement the story, but it doesn’t seem to add anything but backstory. It feels like a lesser version of Transistor‘s readable backstory, where you unlock information about the person behind each Function. This backstory felt critical to the game– each gives you more information on the Camerata and world that existed before the process took over. The Book of Rites doesn’t do that– it tells a story about a fallen emperor (the first exile sent to the Downside), but it doesn’t impact the game. There’s no tangible relationship between the backstory and the gameplay besides where each Rite takes place.

Again, the story isn’t bad… just underwhelming. In this regard, the game does succeed in its characters. While a bit archetypal, it easy to fall in love with and find favorites among the group of Nightwings. The dialogue is well written and feels unique to each exile, and mixing these styles in conversations between characters was always a highlight of the down time you spend in between Rites. Eventually, you come to find out about each of them, what they did to get exiled and what their life was like in The Commonwealth. You never get as much from them as you do the Kid or Red, simply on account of the amount of screen time they get. You learn about as much from each character’s backstory as you do about each Function in Transistor.

SuperGiant definitely minimized their chances of going in-depth with the characters of Pyre, considering it’s party-based. Character depth is something they excel at, so it’s a shame we don’t get to know about each of these exiles beyond a paragraph of bio. However, the frequent interactions and conversations you have with the exiles and they have with each other is enough to make a player enjoy their time with the Nightwings.

As we’ve all come to expect from SuperGiant Games, the visuals and soundtrack to Pyre are masterful. The character design is incredible– each exile looks so incredibly unique from their facial expressions to the colorful garments they wear. Each class has their own specific design, but even members of the same class are easily distinguishable. 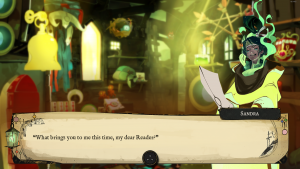 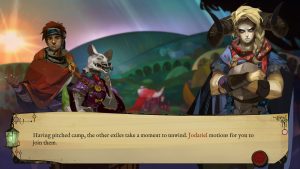 The scenery, from poisonous bogs to volcanic landscapes to treacherous rivers, offers an expansive map and an always beautiful set of landmarks. 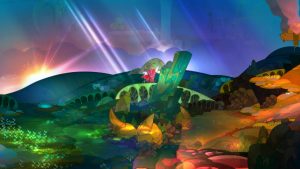 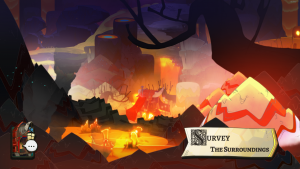 The cart, your home base, is eventually filled with keepsakes from all the lands you travel to, reminding you of each adventure throughout the Downside.

SuperGiant has delivered another wonderful original soundtrack in Pyre. From the stirring vocals of Ashley Barrett (Red in Transistor) and Darren Korb (composer for Bastion, Transistor, and Pyre) in “Never to Return” to the brass-filled jam of “Snake Soul,” Pyre delivers a musical experience like no other.

At the end of the day, Pyre does not live up to the expectation set by SuperGiant’s previous work. The environment, while stunning to look at, serves as just that– something to look at. There’s no real interaction with the environment, nothing you can do to pull out all the secrets of the Downside. Part of what made Bastion and Transistor so cool was the open maps in each stage. You could cut and search through vines in Bastion, and you could explore the process-filled city of Cloudbank looking for Backdoors, Terminals, and little easter egg interactions. None of that wonder is present in Pyre, and it feels like this gorgeous map of the Downside was wasted by a lack of depth.

With Pyre, it seemed like SuperGiant was hoping the story would overshadow the gameplay. It does, but not necessarily in a good way. It’s fine if a game gives more story than gameplay, but that makes it much more important for the little slices of gameplay to be fun, and that’s something Pyre didn’t deliver.

Though my review is harsh, I would still recommend this game. The visuals and music are enough to get anyone through this feeling like it was a rewarding experience. The gameplay, though static and rough, does not weigh down on the game too much to make it unplayable. If you don’t mind clicking through dialogue, you might find yourself lost in the story, willing to grind through the battles to get the exiles to freedom.  Step into the world of the downside, and perhaps you’ll feel differently than I did. 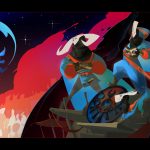 BEAST 7 Staff Admits they Can’t Pay Winners after 6 Months
Can We All Agree Mass Effect: Andromeda is Dead Already?