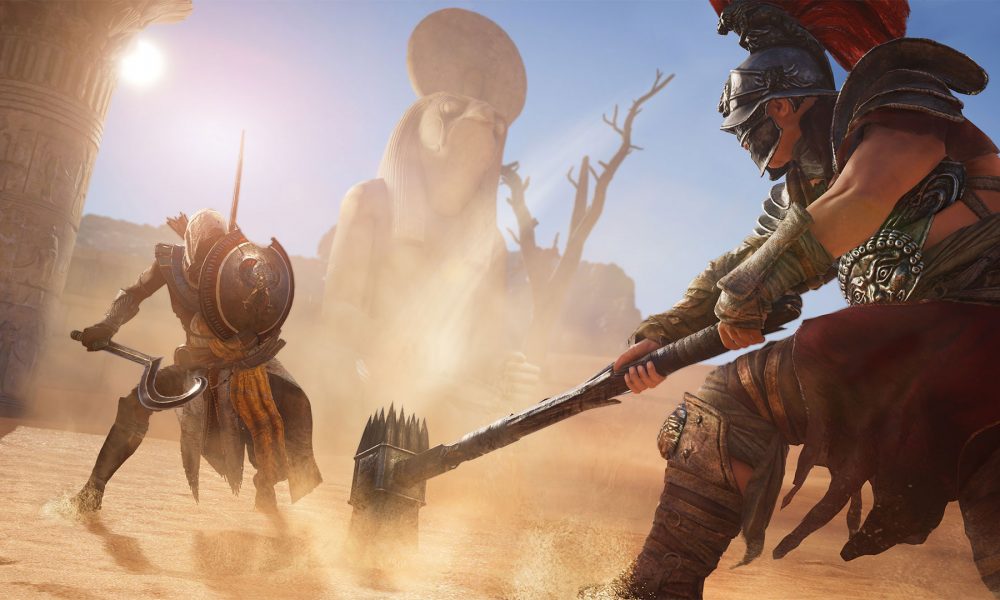 Today, Ubisoft released an official video dissecting the new combat system in Assassin’s Creed Origins. While watching it, I couldn’t help but think of both Dark Souls and The Witcher 3 and saw major inspiration from those two in this game. I am in no way pointing this out in a negative manner, in fact I think it is a step in the right direction for Assassin’s Creed.

Most of the video is narrated by Ashraf Ismail, the game director of Assassin’s Creed Origins, who previously held the same position for Black Flag. In the video, he discusses how from working on that game he and his team wanted “to bring something new to AC.” His previous work on Assassin’s Creed allows him to go into great detail about both the previous combat system and what changes are being made in the new one. This also allows for greater insight into the development process, and thus the inspirations, even if they aren’t explicitly stated.

Ismail first gets at what the combat system used to be in order to show how it has changed. “In previous ACs, the fighting system was a paired animation system.” Basically, this means that when you attack, the character and an enemy would instantly be paired together in a fighting stance. While the combat has definitely evolved throughout the series, the paired animation approach to combat has been the same throughout. As such, Ismail discusses how he and his team “wanted to move away from that”.

This is where things start to get very Souls-y and Witcher-y. Ismail describes the new combat as a “hit-box based system”. “…if you press attack, you’re going to swing your weapon and if something’s there, it’s going to get hit and take damage. If nothing’s there, you’ve just swung into the open air and maybe you’ve just opened yourself up.” This means that the combat and regular stages of gameplay are more closely intertwined, allowing for greater control of your character in and out of combat. It also means there’s more strategy and thought involved in combat. This is all identical to how Dark Souls and Witcher 3 combat work.

Assassin’s Creed Origins’ new combat was further explained and gave off even more Souls vibes especially with some Witcher 3 sprinkled in here or there. Ismail gets at light attacks and heavy attacks being implemented and the strategy involved behind them, including comboing them together. He discusses various weapons and weapon types that the character can use and how each has advantages and disadvantages in relation to other weapons/armor. Everything so far is so quintessentially Souls/Witcher that it’s hard not to think about those series when looking at Origins‘ combat system.

Here’s even more inspiration from those series. Ismail goes into greater detail about ways to do bonus damage, such as attacking enemies from the back and attacking after stunning an enemy by parrying. There’s also a lock-on system, a dodge system, a bleeding damage system, a pseudo boss system, etc. I know a lot of games that use combat in this way, but the pure descriptions of Ismail and the gameplay shown strongly give off the sensation of a Souls game and Witcher 3 above anything else.

Like I said in the beginning, I personally have no issues with this system. Reading some of the comments on the YouTube video, a lot of people are bashing Assassin’s Creed for borrowing from Witcher, Souls, etc. saying things like the combat isn’t “new”. It may not be “new” per se, but it is definitely new to Assassin’s Creed which is what matters for fans of that series. It may not be innovative, but if they can make their own interpretation of this gameplay work well and the game is fun, then who cares? In my mind, mixing up their formula like this is a good way for Assassin’s Creed to get out of the rut it’s been experiencing in the gaming industry.