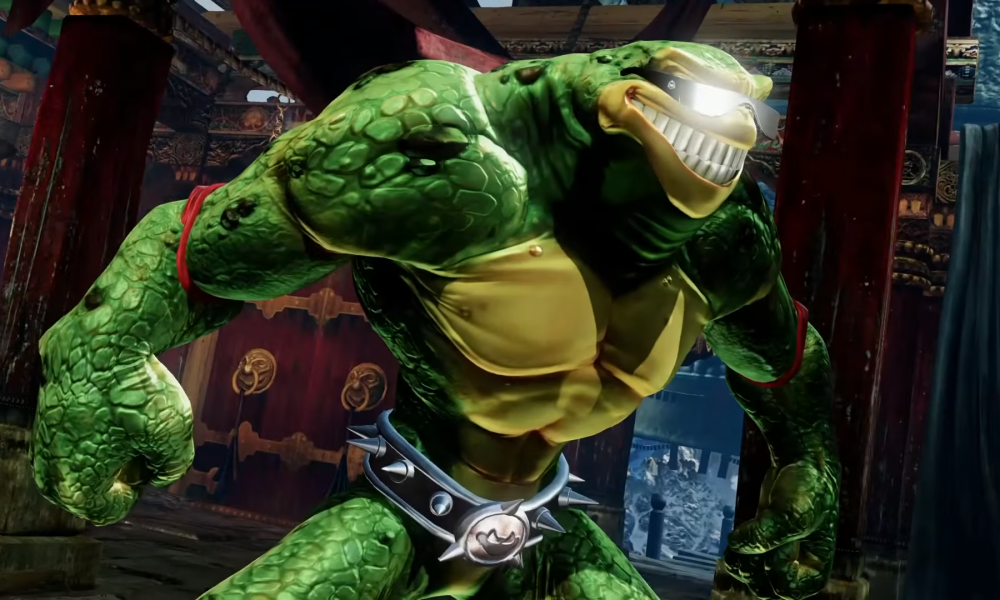 Guest characters are not new in video games; but they aren’t that common either, which is why it’s a special event when two different game companies announce guest characters for their most recent games within a week of each other. We all know the Teenage Mutant Ninja Turtles will cameo in Injustice 2 alongside Hellboy, and yesterday Bandai Namco revealed Final Fantasy XV protagonist Noctis will guest star in Tekken 7 — so now’s a good time as any to go through the history of guest characters and decide which are the best cameos. A few rules, though: the character must be playable (no cameo bosses), must not be just a simple reskin for an existing character, and must be in a game the public has played. Sorry, but the Monster Hunter monsters that guest star in Metal Gear Solid: Peace Walker didn’t make the cut, even though Solid Snake facing down a Tigrex is literally the coolest thing ever. 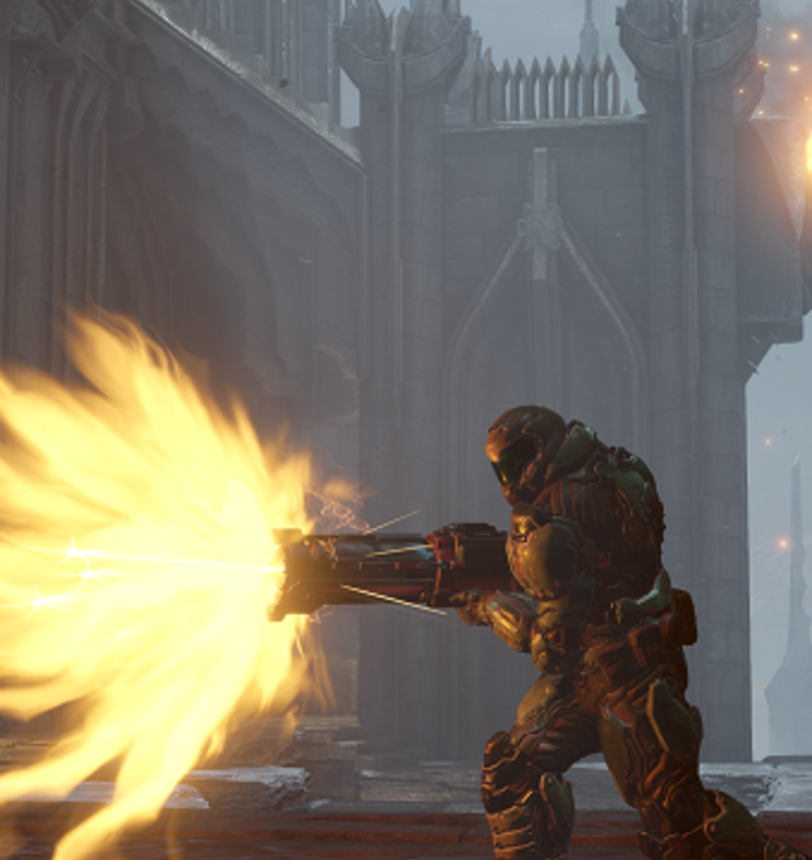 2016’s DOOM is a fantastic game. Not only is it fast and frantic (and bloody), but it tells a compelling story and gives the main character, the Doom Slayer, strong characterization without him uttering a single word. The only problem with DOOM is the multiplayer: it sucks. It uses a loadout system that is at odds with the rest of the game; players expected a fast and frantic mode similar to Quake but got something closer to Call of Duty, so it’s only fitting the Doom Slayer is in id Software’s (currently early access) Quake Champions. I would have put this entry higher on the list, but id Software owns/developed both games, so it was a no-brainer that Doom Slayer would become a guest character in Quake Champions, especially since Wolfenstein‘s B.J. Blazkowicz, another game and character owned/developed by id Software, is also in the game. 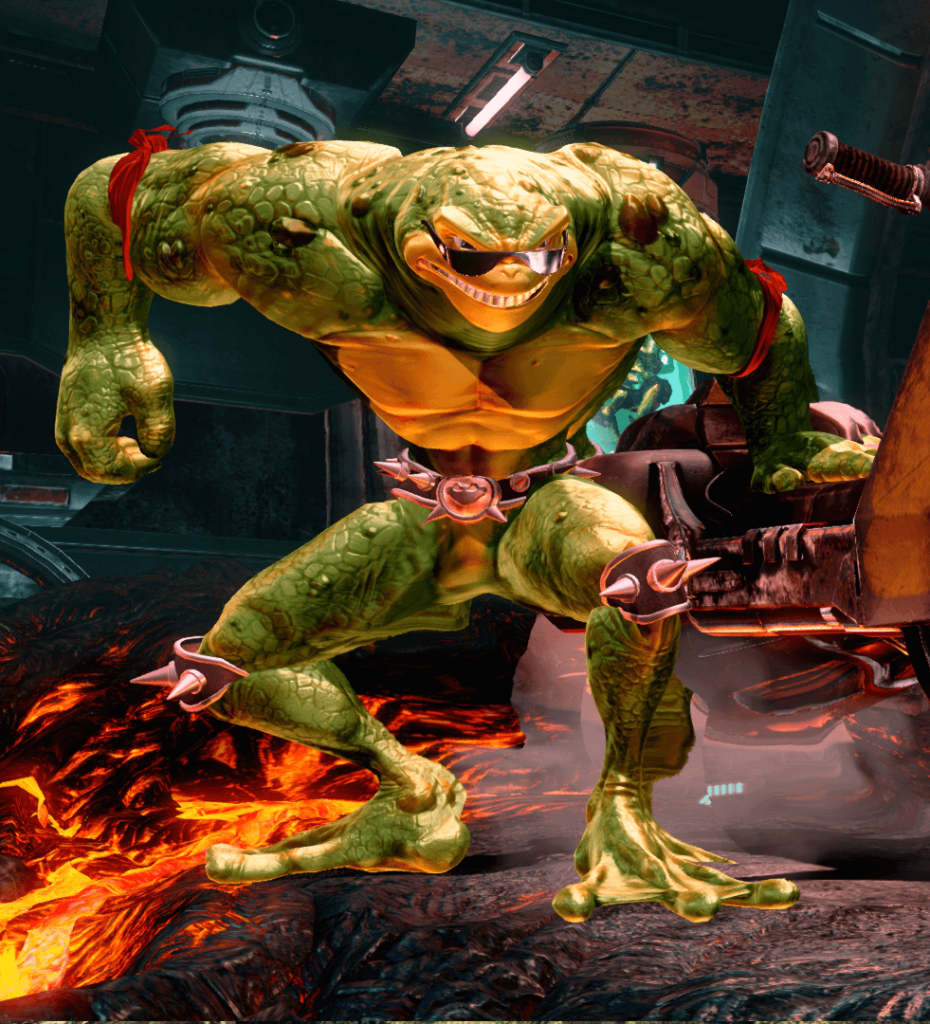 Usually, game developers pick popular characters for cameos, but sometimes they include someone a little more underappreciated. And sometimes they just go all meta on us and include a character made by a particular studio that also created a popular game that has since switched owners. That’s what Rash is: a cult classic character from Battletoads, which is cult favorite game made by Rare, the studio behind the original Killer Instinct. Sure, Iron Galaxy now develops the modern Killer Instinct, but the studio is honoring the creators of the original game by including Rash, which is a very touching sentiment if you ask me.

3. Mega Man in Super Smash Bros. for the Nintendo 3DS and Wii U 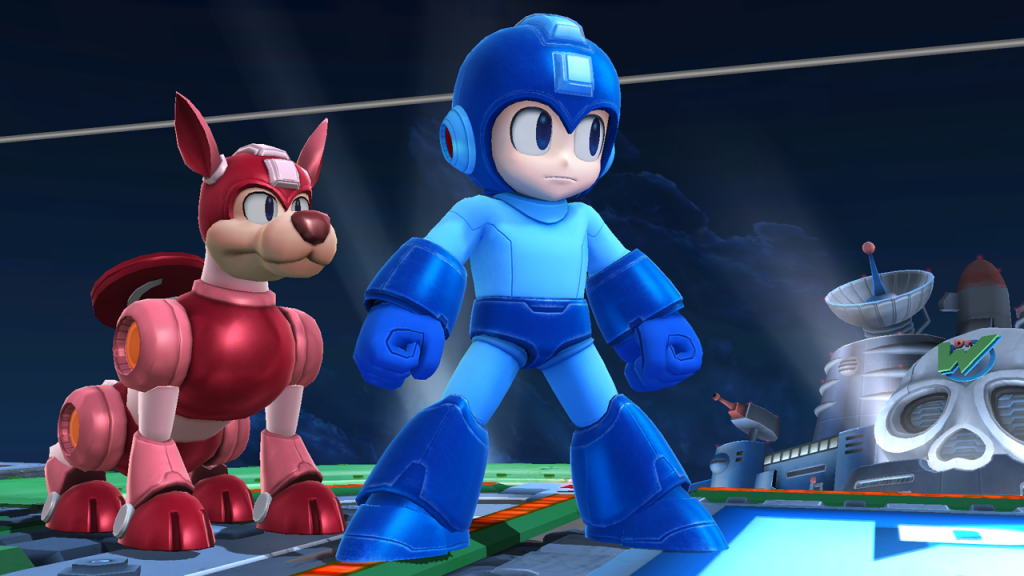 Capcom just doesn’t seem to love Mega Man anymore. Literally all of his games from 2006 to 2014 were cancelled, and the spiritual successor to the Mega Man franchise, Mighty No. 9, was a hot mess. The blue bomber had been absent from the gaming world for such a long time (this has since changed), and many assumed he would stay that way until Nintendo revealed Mega Man would be a guest character in Super Smash Bros. for the Nintendo 3DS and Wii U. Everyone on the Internet lost their collective minds, and for good reason: the game includes a faithful translation of the character. He was a major selling point of Super Smash Bros. for the Nintendo 3DS and Wii U and has proven a popular character, eclipsing many Smash Bros. alum such as Jigglypuff, Kirby, Samus, and Donkey Kong. Sure, the Super Smash Bros. franchise has always been about pitting different Nintendo characters against one another, but Mega Man isn’t a Nintendo property, which is why he counts as a guest character. 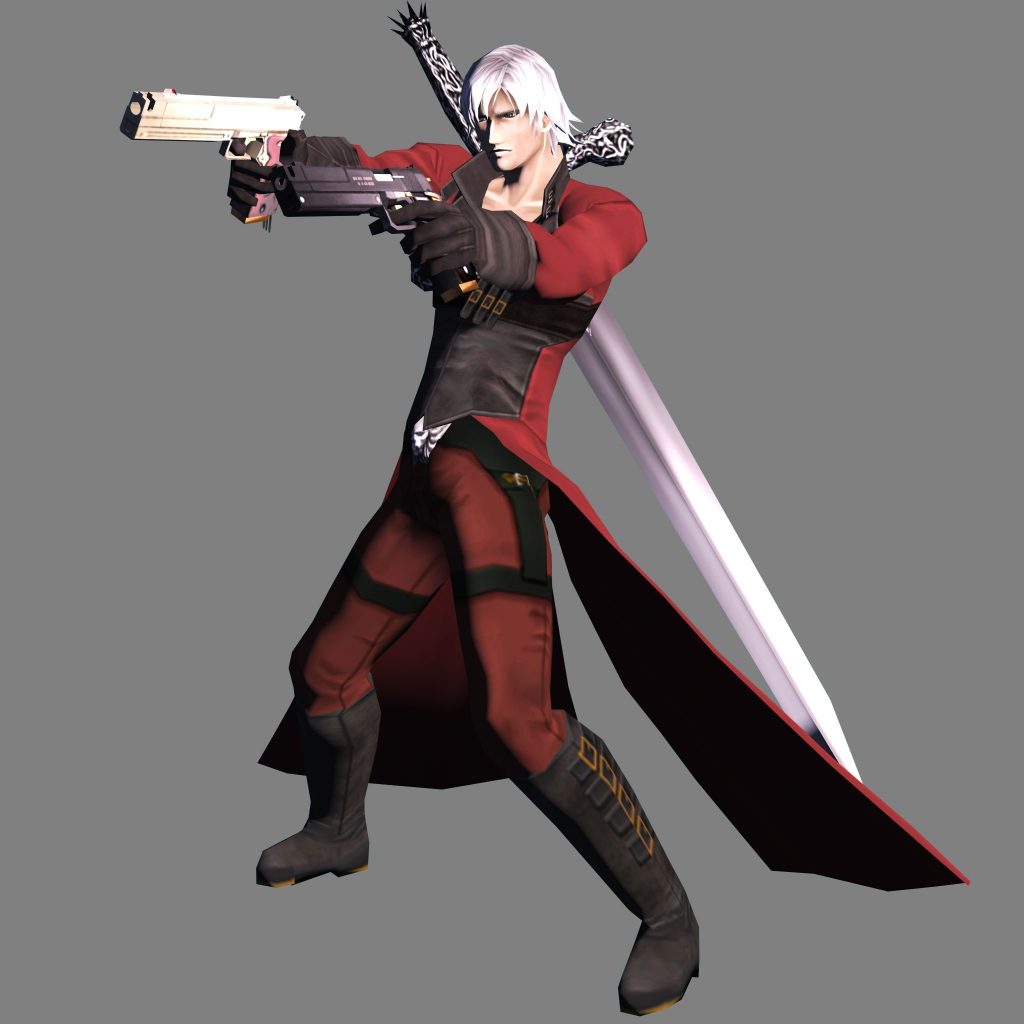 Most playable guest characters are in multiplayer games; and few are ever found in single player games, which makes Dante’s guest appearance in Shin Megami Tensei III: Nocturne all the more special. Not only does Dante play a major role in the game’s story (another rarity in video games; guest characters usually have little to no impact on the story), but he is an extremely powerful character. Dante would never have made it into SMTIII if it weren’t for the sheer number of Devil May Cry fans at Atlus. But, instead of just shoehorning him in as an Easter egg, the developers went above and beyond to turn Dante into a key player in SMTIII, which is why he is so high on the list. 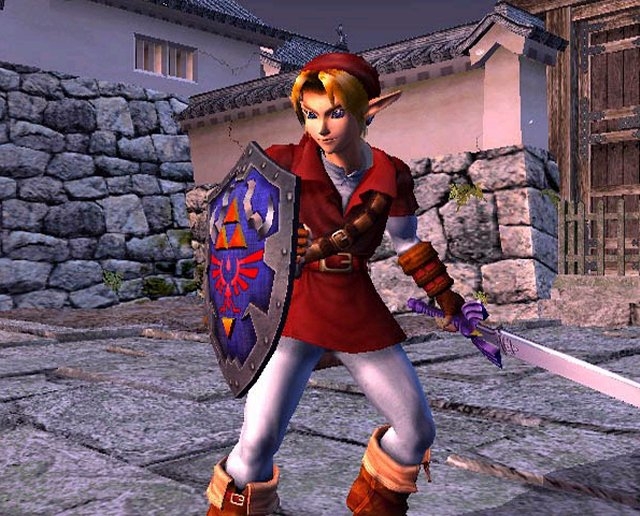 Sometimes guest characters are used to convince gamers to buy a game; publishers tout the inclusion of a character from a popular game franchise as a major feature to increase sales, and it usually works. One of the earliest examples of this tactic was Soulcalibur 2, when Namco included a different character for each version of the game. PlayStation 2 players got Tekken‘s Heihachi; Xbox players received Spawn, and Nintendo Gamecube owners got The Legend of Zelda‘s Link. Each character was a faithful adaptation, and although Heihachi had the advantage of already being a fighting game character, Link was by far the most popular and boosted the Gamecube version’s sales. While Namco tried a similar tactic in future installments of Soulcalibur, they never achieved the same effect, Guest characters aside, all three versions of Soulcalibur II were the same (and fantastic!). But, the Gamecube version was the most popular thanks to Link, which goes to show how effective a good guest character can be. 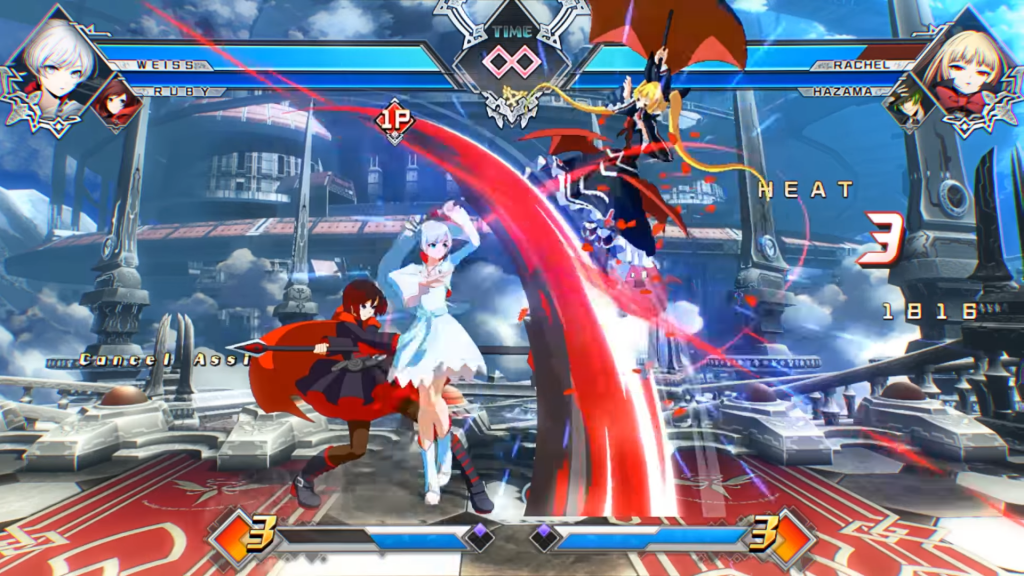 I would say I’m cheating a bit here, but a demo of BlazBlue: Cross Tag Battle was playable at the Rooster Teeth booth at NYCC 2017. However, since the game isn’t out yet, I’ll just put Ruby and Weiss at an honorable mention/unofficial sixth best guest character(s). But, all that aside, yea, it’s awesome to see RWBY‘s Ruby Rose and Weiss Schnee in a fighting game. Normally, guest character spots are reserved for characters from other video games, but this is one of the few cross-media crossovers in existence (I’m on the fence if Hellboy and the TMNT also count as cross-media crossovers since they’re comic book characters in a game that stars comic book characters). Ruby and Weiss’ spots in BlazBlue demonstrate how popular RWBY has become, and with luck they won’t be the only guest RWBY characters. If series creator Monty Oum were alive today, I’m sure he would be crying tears of joy right now.

Zach RileyJanuary 31, 2023
Read More
Scroll for more
Tap
The Teenage Mutant Ninja Turtles Come out of the Shadows for Injustice 2
Deadpool Will Leave the Steam Marketplace Once More