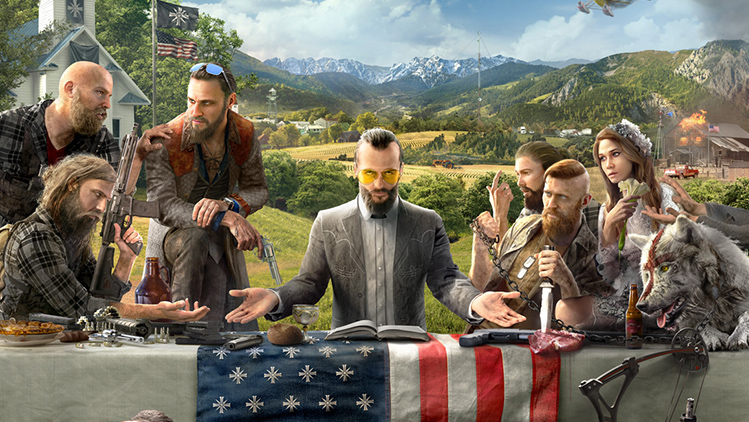 Far Cry 5 has managed to become very divisive thanks to Ubisoft’s decisions to set the game in Montana and frame the villains as a cult of zealous, militaristic, deranged, extremist Christians. The newly released story trailer shows off what sets them apart from other extremist religious groups (and why you need to fight them), but more importantly, Ubisoft has decided to give gamers who buy the season pass a little gift: Far Cry 3.

Earlier today, Ubisoft released a story trailer for Far Cry 5, which places the extremist rhetoric of the villainous Eden’s Gate cult front and center. Holding people underwater (or over what appears to be a vat of acid) in what is clearly meant to be a cruel form of baptism, skewering corpses with the Eden’s Gate’s stylized cross symbol, and forcing people to carry carved stone versions of that symbol; it’s all there, and it’s all blatant and in your face. And then there’s the cult’s leader. For the first thirty seconds of the trailer, he claims he is more important than Jesus (I’m not kidding) in a short but chilling speech that demonstrates he’s clearly insane.

But, the trailer shows off more than just the insanity of Far Cry 5‘s villains. It displays quite a few tidbits of what players can expect from the game, namely recruiting people (one of whom is a devout Catholic priest) into a militia to fight the cult, waving around USA flags, and siccing a trained Grizzly bear on Eden’s Gate members. When the game was announced, gamers loved the premise of using a dog to combat Eden’s Gate, so I can’t imagine how much they will adore mowing down cultists with six-hundred pounds of fuzzy fury. Oh, and since this is a Far Cry game set in America, gamers can expect Michael Bay levels of explosions and vehicular carnage, which is honestly kinda what I want.

If what I described above isn’t enough to convince you to buy Far Cry 5, perhaps Ubisoft’s other announcement will: Far Cry 3 is being re-released for modern consoles as Far Cry 3 Classic Edition, and anyone who buys the Far Cry 5 season pass will receive a free copy. Far Cry 3 put the Far Cry franchise on the map, and both gamers and critics alike claim the main antagonist, Vaas Montenegro, is one of the most entertaining and charismatic villains in video game history and easily steals the show. Whether you love or hate the prospect of season passes (I’m on the fence), I can guarantee this little promotion will sell record numbers of passes. But, if you don’t plan on buying the season pass, Far Cry 3 will be available as a standalone game later this year.

While Far Cry 5 is set to release March 27th, gamers will have to wait until the summer for their copy of Far Cry 3 Classic Edition.