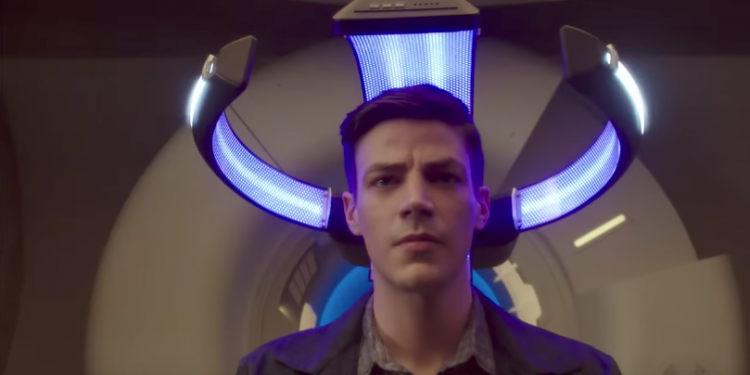 This newest episode of The Flash picks up right where last week’s ended. In it, the titular Scarlet Speedster has confronted Savitar and learned his secret identity. Confirming himself to be the future Flash, Barry has a brief battle with him until he escapes. I’m not going to even try to explain exactly who this version of the future Barry Allen is, how it works in the timeline, or what his motivations are since it would take an entire article by itself (or 3 seasons of a CW show) to do the explanation justice. The simplest way to explain it is that Savitar is an alternate timeline version of Barry from the future or a “time remnant” as they’re called in the show.

There’s also no point in explaining any further who Savitar is since he plays a very small role in this episode. Now that the team knows who Savitar is, Cisco comes up with the idea of messing with Barry’s brain slightly in order to prevent him from creating new memories. This would allow them to come at Savitar without his knowledge of the future getting in the way. However, the plan backfires when they accidentally give Barry amnesia. The rest of the episode is a fun bit of filler where Barry goes about his daily life without his memories and the antics that ensue as a result.

The trailer for this week’s episode worried me since I felt that the idea of giving the main character amnesia for an episode was cliché and boring. While it is definitely cliché, it was anything but boring this episode. The writers did a very good job with what would happen if Barry got amnesia and took basically everything into consideration. For starters, Savitar was out of commission with amnesia as well. Wally didn’t have his powers since if Barry loses his memories, Savitar (aka future Barry) couldn’t have come back in time and created the Kid Flash.

There was also a very touching dilemma that Iris went through in this episode. She saw her fiancé lose all the baggage he had from his past due to his amnesia and watched him truly thrive and enjoy life. She struggled with the idea of leaving him this way so he never needed to experience suffering the loss of his parents or carrying the weight of the world on his shoulders as the Flash. When Barry’s memories return later in the episode, Barry explains to her why he’s better off with that baggage. He tells her how when he traveled back in time to save his mom, creating the Flashpoint Paradox, he experienced the same kind of life he had with amnesia. He decided that he wanted to go back to his old life, however, when he thought about the loved ones he’d be leaving behind if he stayed that way. It was all very heartfelt and well-written.

What didn’t work for me with this episode are the villains. The actors who play Barry Allen and Caitlyn Snow are impossible to take seriously when they’re playing villains. They have far too much charisma and I’ve seen them for the entirety of the show as lovable, nerdy heroes that it just doesn’t work. They’ve finally nailed the outfit for Killer Frost, but I still only see Caitlyn when she’s on screen and the tension leaves the scene for me when she’s playing Killer Frost.

As for Savitar, I think he worked much better as some inhuman, machine, speed god than he does as a regular guy. He was much more intimidating behind the mask, but that’s been the case with every major Flash villain in the show thus far. I applaud the writers for taking a risk with Barry’s character but I still think it’s fallen flat on its face so far. That isn’t to say it can’t become more compelling, especially since the idea of the main character being his own worst enemy is usually the means for a pretty good story. However, actor Grant Gustin will have to bring it as Savitar the next few episodes to justify this plot twist for me. Overall the episode was very good with only a few minor issues bogging it down.