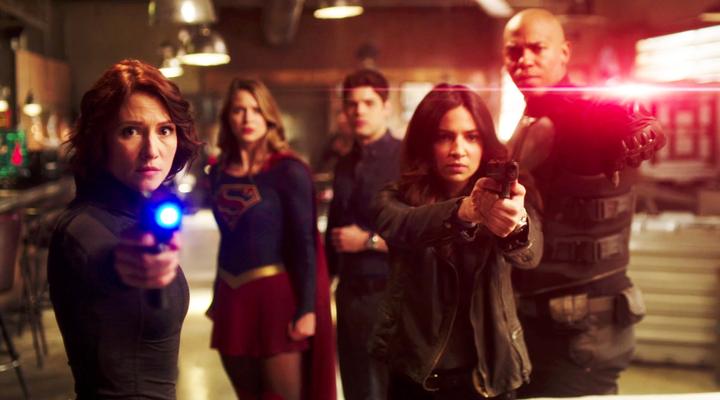 Supergirl kicked off this week of CW DC Comics television shows with a bang. Picking up immediately from last week, Queen Rhea has invaded Earth with a Daxamite army. The DEO headquarters are compromised and Martian Manhunter is taken out of commission, so what remains of the team heads to the old alien dive bar they’ve frequented this season to regroup. Cat Grant makes an appropriately over-the-top and light-hearted return to the show in a conversation between the US president and Rhea. After Rhea’s mothership attacks Air Force One, Supergirl saves the president and Cat. There, they finally learn that the president has been an alien this entire time.

After revealing herself to have nothing but peaceful intentions, the group decides to keep the president’s secret and work with her to defeat the Daxamites. She orders Supergirl and the team to fire a massive laser cannon at the mothership, but Supergirl refuses due to Mon-El and Lena Luthor’s presence on the ship. She goes behind the president’s back and works with Lilian Luthor and Cyborg Superman to board the ship from a transportation device inside Superman’s Fortress of Solitude. After Mon-El and Lilian are freed from the ship, Supergirl stays behind to try and save Rhea from being destroyed by the laser cannon. Before this can happen, the episode ends with Superman arriving, destroying the cannon, and knocking Supergirl back, no doubt under some kind of Daxamite influence.

This is easily the best episode of Supergirl to date. Being the penultimate episode of this season, it naturally had a lot of plot to get through and it handled that quite well. It tied up many loose ends and projected the main story forward in an entertaining way. Everyone in this episode had a specific role to play and none of them were wasted on the plot. It brought back Cat Grant, a mentor character whose brief departure from the show this season ended up being much more impactful than I thought it would be. Her absence led Supergirl and the rest of the team to make incredibly absent-minded decisions throughout the season that wouldn’t have happened if she were there. This would’ve made it difficult for this season to reach the full 22 episodes.

Another aspect of this episode that really surprised me was how on point the visuals were. The CGI in the CW shows has never been great, but there were a few shots in this episode that beat anything The Flash or Arrow have ever done respectively. This coupled with the other visual elements, like the Daxamite soldiers having some really cool armor and weapons, made me feel like I was watching a live action episode of the old Justice League cartoon, in the best way possible. Also, the final shot of Superman punching Supergirl and the two of them preparing to square off in next week’s finale was amazing and will hopefully make for a pretty satisfying conclusion.

There wasn’t really much that didn’t work for me in this episode. Supergirl probably should’ve also called Barry, Oliver, Sara, or anyone from Earth 1 to help out since her first major interaction with all of them was helping them out of a similar alien invasion. Beyond that, there were just a few been there, done that moments for me. For starters, the whole forced marriage story between Mon-El and Lena is very overdone in most stories but it at least wasn’t a huge focus. Also, I finally figured out why the Lilian Luthor character feels so familiar to me. She’s the Supergirl, female incarnation of Arrow’s Malcolm Merlyn. Both love their daughters so extensively that they’re willing to go to sick, ridiculous lengths to benefit them and both are incredibly hypocritical villains that are hard to sympathize with as anti-heroes as the shows intend us to.

I’m mostly nitpicking here since it was a very solid episode of Supergirl. This will be a tough act to follow, both for The Flash and Arrow the next few days and Supergirl again next week. We’ll see how they all do.

Christopher WheatleyFebruary 11, 2019
Read More
The Witcher Netflix Series Will Be Based on the Novels, Not the Games
The Flash Episode 3×22 “Infantino Street” Recap and Review