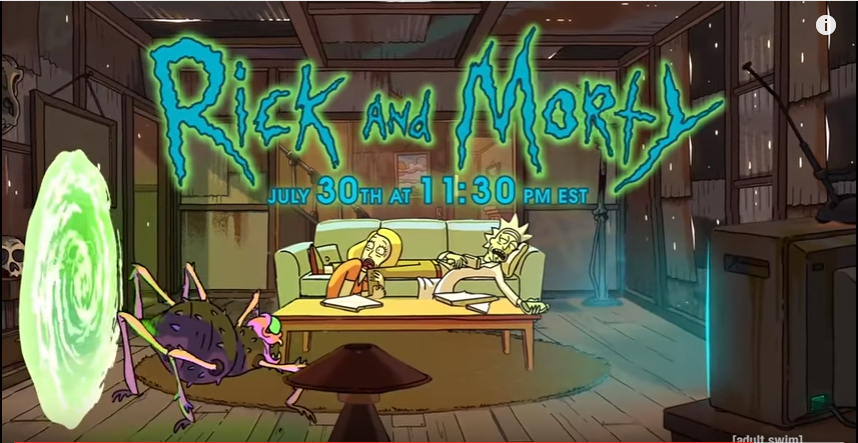 Finally, after a year and a half (or longer), Rick and Morty is back. Adult Swim confirmed yesterday with a trailer that the cult hit animated series will be back for a third season on July 30th. The trailer featured gags from Pickle Rick to Mad Max-inspired chases, in a style that fans have come to love over the last few years.

Pickle Rick– From Animatic to Trailer

It was cool to finally see at least a little of Pickle Rick and his fight against the rats. We got a taste of this at last year’s comic con with an animatic of the scene. Seeing a short clip of it fully animated in color gives an interesting perspective on the animation process. The fully realized scene should prove even more gruesome than the animatic did a year ago.

Welcome to the Darkest Year of Our Adventures

A Year and a Half, Or Longer!

Mr. Poopy Butthole broke the news of Rick and Morty season 3 at the end of season 2.

Fans have been complaining for months wondering when the next season would be released. This was always a weird thing to complain about since the last scene of season 2 confirmed how long it would take. Co-creators Dan Harmon and Justin Roiland have been open about delays, and have placed the blame solely on themselves. Recent false-reports have claimed (without proof) that the long-time collaborators had a falling out, thus halting production. Roiland made fun of the story on his twitter, while Harmon went in depth on their creative process.

I'm so sorry guys. Sorry about this super factual information. @danharmon and I are so sorry for this totally believable and true story. pic.twitter.com/8LPaGy4Udh

In a thread, Harmon first apologized, saying: “Justin and I are very regretful about the season taking way too long. I want to explain “what happened” because it’s way less dramatic than you might ever imagine.” He explained that fans are used to finding out the reason for delays in “intriguing/confusing/intense.” However, this was not the case with Rick and Morty. “The reason S3 took long is because it took long to write, because it was S3 of a show that we were scared to make worse than S2 or S1.” Harmon eased worries, however, saying “as far as I can tell, although I’m too close to it, it’s just another good season of RAM.” He finished with “we’re flattered by it and thankful to you and can’t wait for you to see S3 and also JUSTIN IS A PIECE OF SHIT I’M GOING TO FIST FIGHT.”

Harmon had been as open as he could in the past 18 months, one question answered in a comical rap titled: “They’re drawing it.” While the reason for the “delay” (though it wasn’t really a delay) isn’t dramatic, it’s good to see Harmon open up about the process of writing Rick and Morty (something he’s done various times before).

The release date of July 30th is close to 21 months after the season 2 finale. While it’s been a while, they certainly kept to Mr. Poopy Butthole’s promise. Rick and Morty comes back with episode 2, Rickmancing the Stone. The first episode premiered back in April, so be sure to catch up if you haven’t!