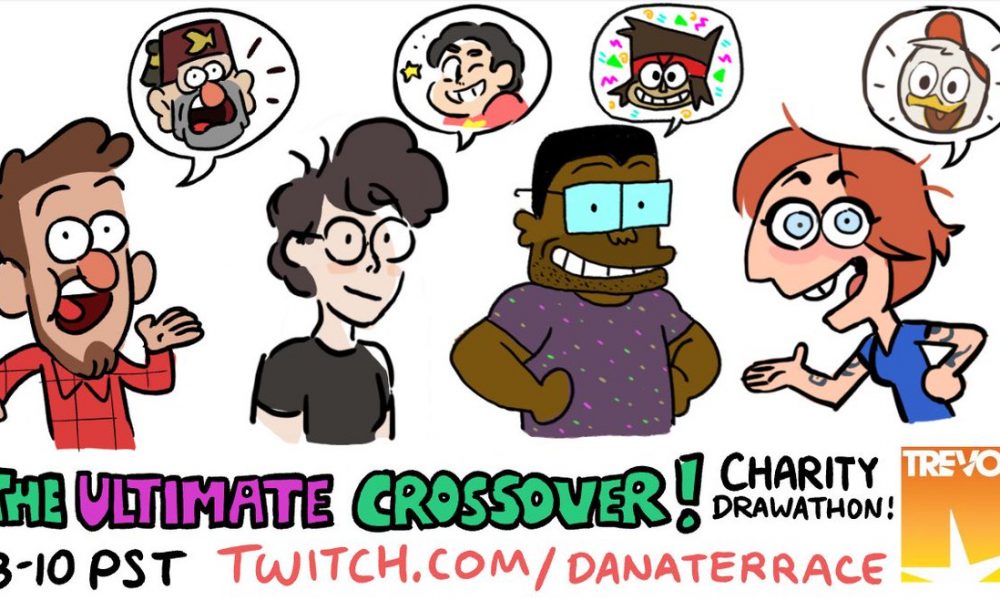 Some of the biggest names in children’s animation are teaming up for a two hour charity stream. Alex Hirsch, Rebecca Sugar, Ian Jones-Quartey, and Dana Terrace will be streaming drawing requests tonight from 8-10 PDT, with all donations going to the Trevor Project.

Hirsch is best known for his work on Gravity Falls, which aired its finale early last year. Falls followed twins Dipper and Mabel Pines, living in a tourist trap in Oregon. The show received high praise due to its in-depth storyline and intricate secondary material in the form of ciphers made by Hirsch. Falls won two consecutive Emmys for “Dreamscapers” and “Not What He Seems.” Hirsch is currently working on a live-action Pokemon movie and developing a new animated series for Fox.

Sugar cut her teeth on Adventure Time, writing many of the fan-beloved Marceline episodes. She went on to create another cult show, Steven Universe, now in its fifth season. It follows young Steven Universe, the first gem-human hybrid being raised by his mother’s former team, a group of rogue gems. The show has been praised for its science-fiction world building and diversity of characters. It received Emmys nominations in 2015 and 2016, and is currently nominated for one in 2017 for “Mr. Greg.”

Jones-Quartey also worked on Adventure Time as a storyboard revisionist, served as co-executive producer on Steven Universe, and created O.K. K.O.! Let’s Be Heroes, which aired its premiere recently. O.K. K.O.! strated as a pilot released by Cartoon Network, which was then made into a mobile game, released alongside multiple shorts. It follows K.O. in his quest to be the greatest hero ever, set in Lakewood Plaza Turbo.

Terrace served as a storyboard artist on Gravity Falls, and is a director on Disney’s upcoming reboot of Ducktales. It follows Scrooge McDuck reuniting with Donald Duck and his three nephews. It’s set to premier later this month, August 12.

The Trevor Project was founded in 1998 by the creators of the short film TREVOR. According to its website, it’s the “leading national organization providing crisis intervention and suicide prevention services to lesbian, gay, bisexual, transgender and questioning (LGBTQ) young people ages 13-24.”

Be sure to stop by Dana Terrace’s twitch by 8 PDT!