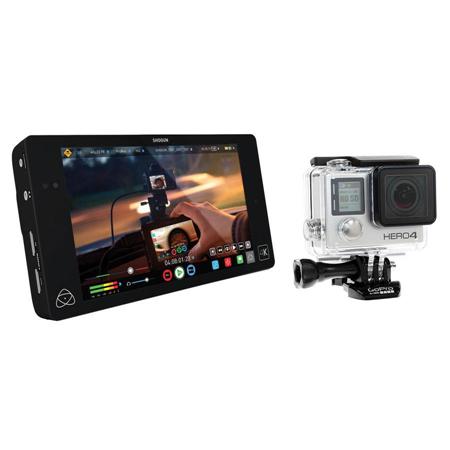 Interested in acquiring a free GoPro Hero 4 action camera? Of course you are. As it happens, we know a way by which you can do exactly that, however, this is an offer that’s only worth it if you were also in the market for an Atomos Shogun 4K. The Shogun is a 7-inch HDMI & 12G-SDI monitor with touchscreen that’s very useful for both recording and editing. At almost $2000, this professional gadget is not exactly cheap, but if you’re serious about editing while in the field the price is definitely well worth it. As it happens, Adorama currently has a special promotion going on and it allows anyone who buys a Shogun to receive a free GoPro Hero 4, which is currently priced at around $420 if purchased separately.

The Atomos Shogun is marketed as being “the world’s most advanced video and audio monitor” and comes equipped with a 7.1-inch display with 1920 x 1200 resolution and 320 pixel density. You can hook up the device to a camera in order to make full use of all the features, including 4K video recording at 30p and HD at 120p via HDMI or 12/6/3/1.5G SDI. Once you’ve finished recording, you can then start using the plethora of editing tools to create masterpieces on the spot.

As for the GoPro Hero 4, this is an action camera that likely needs no introduction as it is one of the best and most highly sought after in its class. The price is definitely worth it if you’re passionate about high-quality photography even though $420 is not exactly cheap. Luckily though, Adorama is offering the camera for free with every Atmos Shogun purchase so make you look into this limited-time promotion before it expires on September 30.

The Legend Of Zelda: The Wind Waker HD Now Available For A Reduced Price On Amazon
Chuwi Hi8 – the affordable Windows 10 tablet