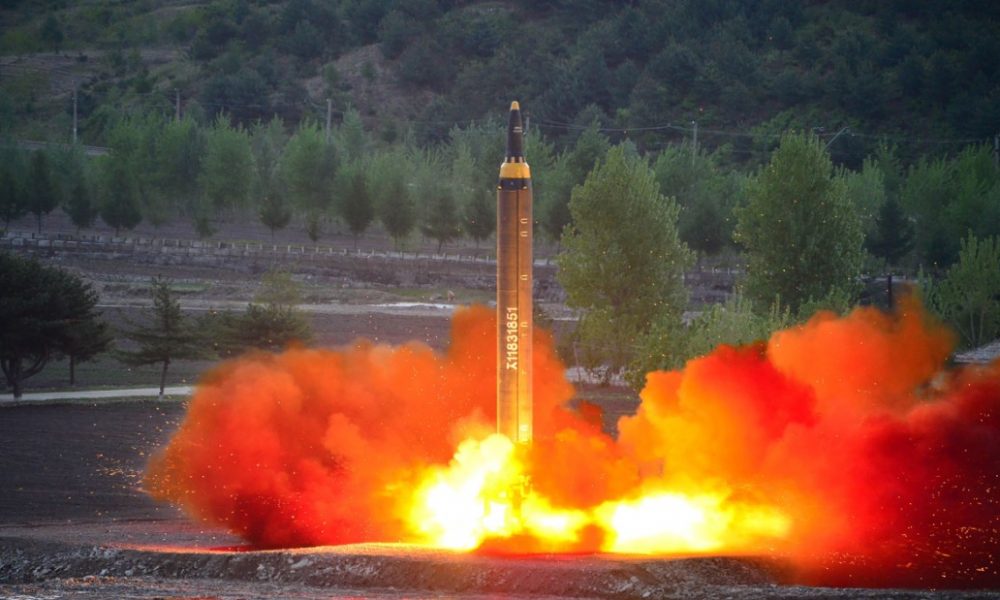 On the eve of the G20 summit North Korea has launched what is very likely to be an Inter Continental Ballistic Missile, or ICBM, that is capable of reaching Alaska. Reports are still a little sketchy and the missile did come down in the sea of Japan but it appears that the North Korean missile may finally be capable of hitting the Mainland United States.

If the test does indeed represent an ICBM then it will require a rapid recalculation of the threat posed by Pyongyang and may force President Trump to push harder on the so called Pivot to Asia.

According to the South’s Joint chiefs of staff The “Unidentified Ballistic Missile” was launched from a base in the North Phyongan province and it crashed down somewhere in the Eastern Sea (The Korean name for the Sea of Japan). The missile flew for around 900 Kilometers (559 miles) and reached altitudes of 2,500 Kilometers (1553 miles).

In a blog post on All things Nuclear David Wright estimates that if the missile did indeed reach this altitude it has a theoretical range of around 6,700 Kilometers (4,160 miles) on a standard trajectory. This would allow the missile to target American military bases in Guam as well as the larger hawaiian islands and Alaska.

While this is a huge leap forward for North Korean missile technology experts believe that it is unlikely that North Korea is able to effectively miniaturize a nuclear warhead or actually aim the missile with any accuracy. That being said, a ballistic missile that can reach that altitude is more than capable of hitting American military installations in the South Pacific, which will raise concerns as to Washington’s ability to maintain its presence in the region.

As usual, we didn’t have to look beyond the Twitter feed to see the President’s unfiltered thoughts on this. Once you pick through the noise there is one important phrase, the President has urged China to “End this nonsense once and for all”.

The President has correctly identified the crux of the issue. The North Korean regime and the North Korean missile crisis  only exists because it has China’s tacit approval to exist. America, Japan and anybody else who is threatened by North Korea’s repeated flouting of international law is relatively powerless to act without China’s backing.

Without China’s support the options open to NATO and the United Nations are limited. They could impose further sanctions on the rogue state but this has not deterred North Korea from investing in its missile program in the past and it’s hard to see how the North Korean state could be pushed any further.

That leaves the prospect of military action, which is problematic at best. The capital of South Korea, Seoul, is very close to the North Korean border and would likely suffer heavily from shelling and bombing in the wake of any incursion into the North. On top of dealing with a displaced civilian population, NATO or UN forces would then be facing a determined local opposition that may put up  a much tougher fight than anticipated. That is before we bring China into the occasion, who may well act in defence of North Korea, risking a conflict between two of the world’s largest militaries.

The solution is in China’s hands

The truth of the matter is that we are essentially powerless to act until China turns on its North Korean ally. There are early signs that Beijing is losing patience with Pyongyang’s erratic behavior on the world stage and stepping up their missile will only further exacerbate those feelings.

Since sanctions are not working and military action risks inflaming the situation further, the best way to stop North Korea is through dialogue with its protector. If America and her allies can convince China that North Korea is a threat to stability in the region and to Chinese interests, particularly in the South China sea, then there is a chance that China may withdraw its support from the North Koreans.

Both Russia and China seem to have recognized the danger that North Korea’s actions pose to stability in the region. Both Russia and China have condemned the recent launch and called upon North Korea to stop any future launches. This reaction is in part to discourage in the United States from deploying the Thaad missile system in South Korea, rather than a full scale disavowment of Pyongyang’s actions.

That said, it shows that China and Russia both recognize that their words hold sway over Pyongyang and that the solution to the North Korea problem lies in their hands. We can only hope that they chose to use it.