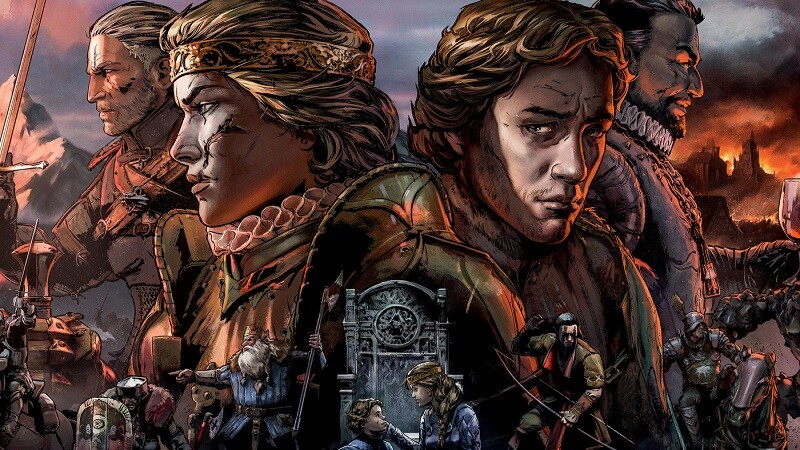 While it remains to be seen how long it will before another main Witcher game is released, CD Projekt RED has shown us repeatedly that there’s much more to share from this world. The game’s popular Gwent card game got a standalone release, and now they’ve released a new RPG/CCG hybrid experience called Thronebreaker that is unsurprisingly fantastic.

It’s clear from the beginning that Thronebreaker is going to be a unique experience, as you’re introduced to protagonist Queen Meve of Lyria. Her country has been invaded by the Nilfgaardian Empire, which results in her embarking on a journey to rally support and fend off the invaders. However, instead of the ensuing combat being delivered through action RPG gameplay, we’re instead taking on enemies in card battles.

Anyone who is familiar with Gwent will be right at home here, but I’ll provide the basics for those who aren’t. Gwent takes place on a board where each player is provided two rows to place cards, and the positioning of these cards will determine what they can attack and how they’ll synergize with their ally cards. Each card has a number that will add points to your score, with the objective being to have the highest score when the round ends. Typical matches will be a best two-out-of-three scenario, though this game will often put you in scenarios where there will be just one round. 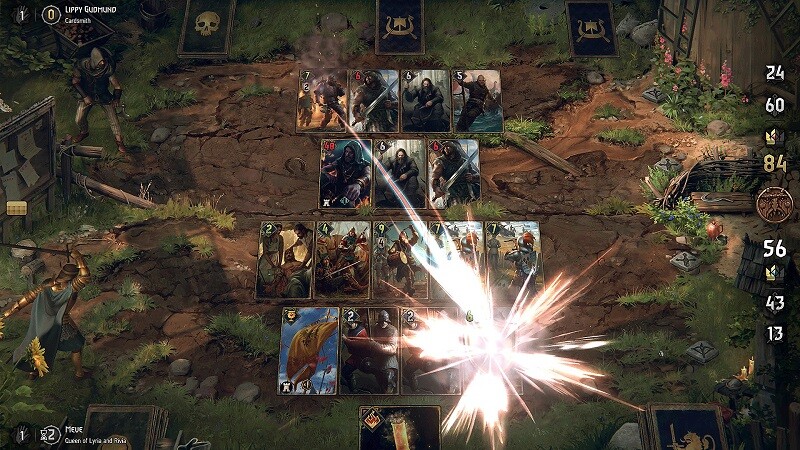 Thronebreaker does a good job of easing you into this interesting card game, because it can be a little confusing at first. Each card has various abilities that can only be used in certain situations, and keeping track of your own abilities and the abilities of your enemies can be overwhelming at first. However, once you’ve gotten a few battles under your belt it all clicks and you’ll be able to utilize strategies to take down your foes.

On top of having cards at your disposal, you will also be able to utilize special abilities from Meve called Trinkets. These allow her to dish out some powerful moves or stat boosts to your cards, though they take several turns to recharge. One of her Trinkets allows her to attack an enemy opponent, and then any card with the Loyal attribute will get a stat buff. Considering the difficulty of some of these battles, it’s often the use of a well-timed Trinket that will tip the balance in your favor.

Your journey through the game will offer plenty of standard Gwent battles, though the more interesting ones are the ones where the game puts restrictions on you. Sometimes you’ll have to win a battle without letting a certain character card get destroyed, and others will have you do things like trying to stop a landslide from killing everyone. Considering that these scenarios choose your deck for you, you’re forced to figure out how you can utilize the particular cards at hand to win rather than just crafting the perfect deck beforehand. 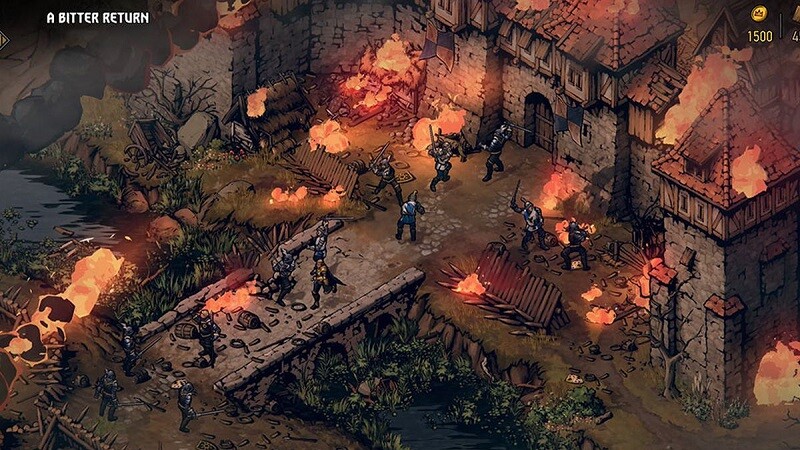 You’ll initiate the variety of different card battles that the game has in store for you via the traversal of a surprisingly expansive over world. You’ll control Meve in an isometric view as she journeys through towns, forests, battlefields and more, and each come with their own engaging story sequences. The hand-drawn, visual novel style to the story sequences is excellent, giving a less serious vibe than what the main Witcher games offer without sacrificing any of the depth. Everything from the writing to the voice acting is top-notch here, which makes it very easy to get lost in the game’s world. Meve herself is no Geralt when it comes to protagonists, but she’s still a competent protagonist in her own right with her cold and no-nonsense demeanor.

The map here in Thronebreaker is also littered with plenty of side quests and loot that is off the beaten path, heavily rewarding those who take the time explore every inch of what the game has to offer. Considering the interesting characters that you’ll meet along the way and the rewards you’ll accumulate, ignoring the story missions and just exploring the map is often even more fun than the main storyline. It obviously isn’t on the scale as that of a regular Witcher game, but considering the blending of genres here I think the developer reached a solid compromise.

Despite this being a CCG, there are still RPG elements that fans of the main Witcher series will appreciate. This is achieved through the Pitch Camp feature, which allows you to utilize your Gold, Resources and Troops to improve Meve’s abilities, strengthen your deck, get more money from winning battles and more. There’s even a tavern in this camp that allows you to converse with some of the game’s companions, which contains more excellent dialogue that further fleshes out the characters and the world. 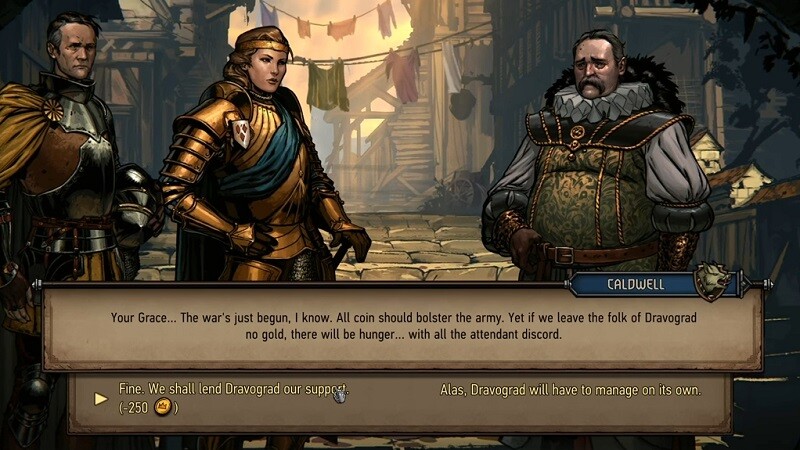 RPG fans will also be glad to know that Thronebreaker features a decision making system that comes with real consequences in the game. It’s hard to go more than a few steps before your presented with a scenario where Meve needs to make a tough decision, and those decisions may come back to haunt you later. One example includes a group of townsfolk that want to kill an elf they claim to be evil, and you need to decide whether to let them kill him or intervene. The decisions that you make can even boost or reduce the morale of your troops, and if you make too many poor decisions then even your main companions will leave you.

It all culminates in a truly unique CCG/RPG experience that is unlike anything else that is currently on the market. The narrative is engaging, the gameplay is challenging and the game’s world is dripping with detail that begs you to turn over every last inch of it. Fans of the Witcher series will definitely want to check the game out for the game’s lore, but those who are just into the CCG genre should give it a look as well. Overall, Thronebreaker: The Witcher Tales is an experience that shouldn’t be missed. 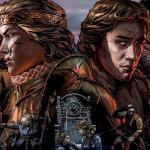 LitRPG Books That Will Get You Hooked
Thronebreaker: How Long To Beat & How Many Chapters There Are