The Danube river bed is deepening 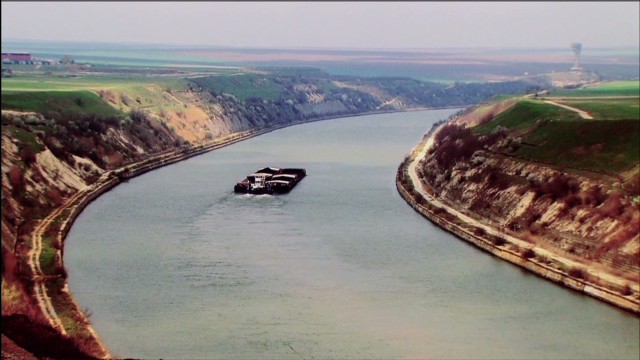 The Danube river bed is deepening

As the Danube river flows from the Black Forest to the Black Sea, it has to pass through colossal dams and the gravel that it carries from the Alps is left behind as it can’t get through the dams, which causes the river bed to get increasingly deeper.

Scientist and the river authorities have investigated the status of the river downstream of the Gabcikovo dam in Slovakia to see how much gravel is being transported by the river and they discovered that each rock fragment migrates about 3 kilometers each year. Eight thousand tons of gravel are transported downstream in this one section of the Danube and there is no new gravel coming from upstream, so the Danube is deepening.

With this information scientist and engineers came up with a solution to prevent the Danube digging itself deeper by collecting gravel downstream and releasing it upstream. A hundred thousand tons of gravel are released upstream every year and this is only half of the gravel needed. Engineers are conducting experiments for more efficient ways of getting the gravel needed to reduce the erosion. It’s a big task for the engineers but the fish and the mammals from the forests depend on its success as the Danube is home to four thousand animal species.

The Gabcikovo power station is highly controversial because is causes the Danube river between Viena and Slovakia to drop 2 centimeters a year and already destroyed several kilometers of wetlands.

Samantha JacksMay 2, 2017
Read More
Scroll for more
Tap
Neil deGrasse Tyson spices up the Super Bowl with some interesting science facts
The Hubble Telescope should live at least until 2020 according to astronomers