Mars had plenty of water in the past, but probably no life forms 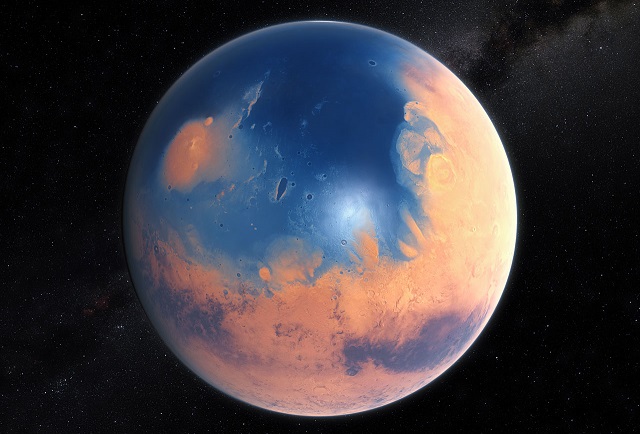 Mars had plenty of water in the past, but probably no life forms

Mars has been in the news quite a lot these past few months, as I’m sure some of you may already know. This isn’t exactly a surprise seeing as how our neighboring planet is scheduled to receive human visitors at some point in the coming decades. Learning everything we can about Mars beforehand is certain to help scientists draw a better plan for the upcoming manned mission while also hyping up the general public so that they can contribute with what they can to what’s expected to be the next important milestone in space exploration.

Last month we were pleasantly surprised to learn that Mars still has a bit of water under its dry surface, however, according to a recent study it seems like this is just the remnant of an ocean that covered the planet billions of years ago. Astronomers have long since suspected that the Red Planet may have hosted large amounts of water in the past, but now thanks to NASA and the European Southern Observatory we have even more reasons to think that this was indeed the case. The research conducted using the Very Large Telescope found in Chile as well as the Hawaii-based Infrared Telescope Facility and  WM Keck Observatory suggests that Mars lost an ocean’s worth of water over the last 4 billion years.

“It implies that a substantial amount of water was available during the first billion years on Mars, raising the possibility that ancient Mars was habitable,” Geronimo Villanueva, a planetary scientist at NASA’s Goddard Space Flight Center, told Astrobiology Magazine.

To give us a better idea about just how much water was lost, the researchers claim that about 19% of Mars’ surface would have been covered by a mile deep ocean if all that water was still around today. These new findings could potentially indicate that Mars was once able to sustain life, especially since life as we know it seems to thrive in pretty much every place where there’s water. At least, that’s what the life forms found here on Earth would suggest. What’s true here may not be true everywhere though and some scientists are skeptical in regards to this theory. The skepticism comes from the fact that water may not have been widely available in liquid form on Mars because the planet was likely much colder than our own throughout its history.

The amount of water lost by Mars would have been enough to cover the entire planet in a 137 meter (499 feet) deep global ocean if we were to distribute it equally across its surface. Even though this seems like a pretty big amount, a global ocean on Earth would be several kilometers deep if we were to take all the water found here and spread it in a similar fashion. According to planetary scientist Robin Wordsworth from the Harvard School of Engineering and Applied Sciences, it’s very likely that Mars had very little water at any point during its history and the water it had was probably available as ice rather than liquid. This pretty much excludes the possibility of life, although more studies are needed before scientists can say for certain.

“Their [Villanueva’s] results are entirely consistent with a predominantly cold, icy scenario for early Mars,” said Wordsworth. “A global depth of 137 meters still implies a relatively dry planet, and doesn’t allow a deep northern ocean. The water could have mainly been in the form of ice rather than liquid.”