LHC Smashes Its Own Energy Record with 13 TeV Collision 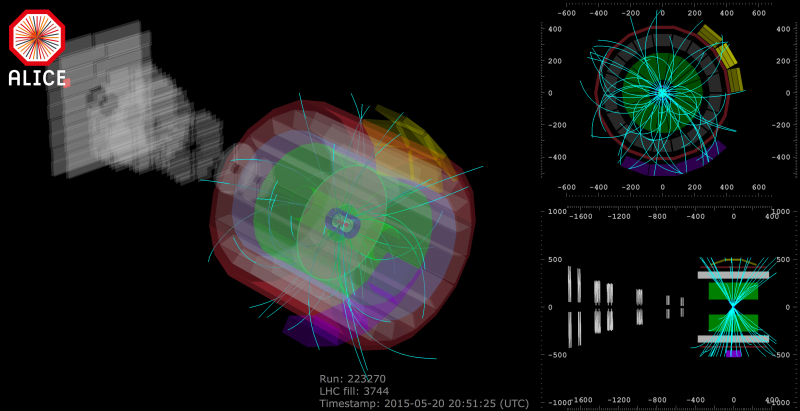 LHC Smashes Its Own Energy Record with 13 TeV Collision

After discovering the elusive Higgs boson back in 2012 (and generally doing some pretty amazing, albeit less publicized science), the Large Hadron Collider took an extended break for maintenance and upgrades. This spring, the LHC came back online and recent tests have shown an impressive improvement in capabilities. The Higgs boson, for example, was found as the by-product of collisions at energies of 7 or 8 TeV (tera-electronvolts). Now, the already record-breaking LHC has gone far beyond that energy, and can do experiments at an impressive 13 TeV!

OK, but what’s an electronvolt? And why do scientists sometimes give the mass of a particle in this unit (the mass of the Higgs boson, by the way, is about 125 GeV, or giga-electronvolts)? Isn’t energy measured in joules or ergs, and mass in kilograms? Well, yes, but using this unit of measurement is not only useful, but also quite meaningful, particularly in particle physics. Here’s why.

An electronvolt is simply the amount of energy a particle with the same charge as an electron (or a proton) gets when accelerating through 1 volt of electric potential difference. This is a really small number, since the charge of an electron is 1.6 x 1019 coulombs – which is precisely why it is so useful when talking about these tiny particles. Also, scientists don’t like having to memorize a lot of fancy names, so they also use electronvolts for mass. This works because, according to Einstein’s famous E = mc2, matter is basically “condensed” energy. This means you can measure mass in units of energy (in this case, electronvolts instead of the standard joules) divided by the speed of light squared (E/c2) however by convention the c2 is dropped and we just get the energy figure followed by an eV.

Now we have a sense of what these figures mean – so what do they mean in practice for the LHC and for science, in general? What will we see at 13 TeV that was previously beyond our grasp? Hard to say for certain, but some new insights into dark matter would be nice, or supersymmetry, other dimensions, or the very early Universe. Or maybe something physicists haven’t even though of yet. We’re venturing farther than ever before into the scientific wilderness, which means it’s certainly going to be an exciting journey either way.

No data has been collected from these initial 13 TeV experiments yet – this is expected to begin in a few weeks time. So things will be getting really hot in Geneva this summer.

Washington State Finds its First Dinosaur Fossil, a Relative of the T-Rex
How Supermassive Black Holes Power the Brightest Things in the Universe