Dark side of the Moon showcased in stunning images by NASA 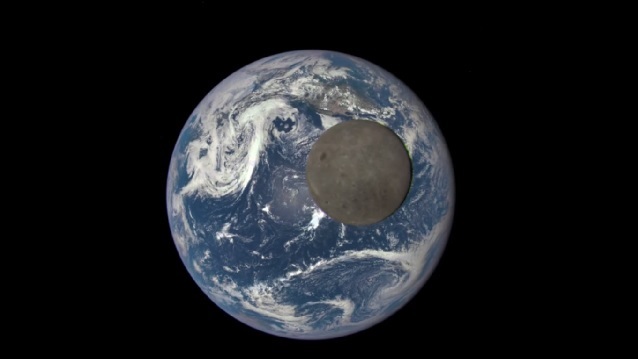 Dark side of the Moon showcased in stunning images by NASA

The dark side of the Moon has been the subject of many fantasy stories and wild speculations in the past, but now thanks to modern technology, we are bit by bit starting to unravel all its mysteries and shed some metaphorical light on the matter. Despite its name, no part of the Moon is engulfed in darkness and yet, while looking at our celestial companion from Earth we might think otherwise. Fortunately, the Deep Space Climate Observatory developed by NASA recently managed to snap some very nice pictures of the dark side of the Moon so that we need not wonder anymore about its appearance.

The Deep Space Climate Observatory – also known as DSCOVR – was primarily tasked with monitoring coronal mass ejections from the Sun and warn us should there be any unusual activity that could pose a threat to our electronic equipment. In addition, NASA also programmed DSCOVR to take pictures of Earth in ten wavelengths using its state of the art Earth Polychromatic Imaging Camera (EPIC). As it happens, the observatory is far enough from Earth that it can also capture images of the dark side of the Moon while it monitors our planet; and what pretty pictures they are! In fact, NASA decided to compile a short video using said pictures in order to showcase a side of the Moon that we rarely get to see.

As many of you surely already know, the Moon is tidally locked to our planet, which means that we always only get to see the same side regardless of season or where we are on Earth. The side we can see in the night sky is battered with asteroid craters that seem to form certain patterns if you look close enough. These patterns and usually pretty noticeable have long been associated with things such as the “man in the Moon”. The dark side of the Moon, however, does not feature any such patterns and looks to be much less scarred by time and impact. Looking at the pictures of the dark side of the Moon provided by NASA is almost like looking at a different object because that side is so much different, but I assure you that this is the very same Moon we all know and love.

Interestingly enough, the dark side of the Moon is the side that’s exposed directly to the Sun, so one would assume that it should actually be brighter. However, the Earth is able to absorb much more sunlight than the barren Moon thanks to our oceans and, in turn, some of this light is reflected back onto the face of the Moon that’s always looking at us.