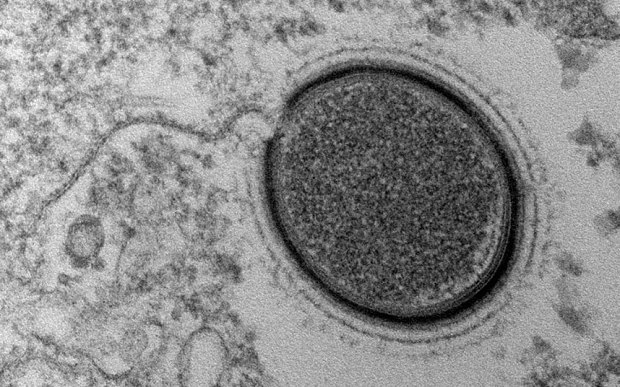 Prehistoric giant virus will be revived

Although sounds like a nightmare waiting to happen, it’s actually good news. This particular virus, which is 30,000 years old was found in the Siberian permafrost by a team of French scientists from the French National Center for Scientific Research. They are raising concern that global warming may release dangerous, prehistoric viruses from the Arctic and Sub-Arctic regions, which could infect people.

The newly discovered ancient virus, called Mollivirus sibericum (Siberian soft virus) is 0.6 microns, which qualifies it as a giant virus. This is the team’s second giant virus discovered in Northeastern Russia, in recent years. Unlike the common influenza virus, which is small and has only 8 genes, a prehistoric giant virus has a large and complex genome. Mollivirus has over 500 genes, while the largest giant virus known until now, Pandoravirus has 2,500 genes.

In order to study this giant virus and see what it can do, the researchers must revive it, because they obviously can’t study it frozen and inactive. However, they will conduct the “Frankenstein” experiment in a super safe laboratory, under draconic safety rules. The scientists will then place the giant virus in a Petri dish that has an amoeba as a host. “A few viral particles that are still infectious may be enough, in the presence of a vulnerable host, to revive potentially pathogenic viruses,” said Jean-Michel Claverie, the lead researcher.

The scientist points out that this type of experiment is important because the frozen Siberian regions, which are rich in many resources will get warmer year by year. The permafrost won’t be permanent anymore and hundreds of potentially dangerous viruses could be awaken. “If we are not careful, and we industrialize these areas without putting safeguards in place, we run the risk of one day waking up viruses such as small pox that we thought were eradicated,” added Claverie.

This type of experiment was also done by a team of American scientists, back in 2004. They awoke the Spanish flu virus in order to see why it killed millions of people at the beginning of the 20th century.