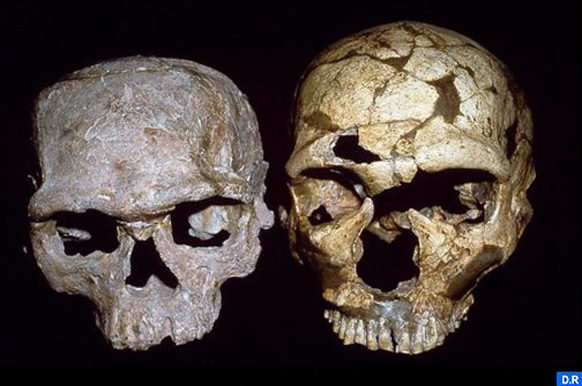 Earlier this month, researchers published an article outlining new evidence from an excavation in Jebel Irhoud (Morocco) that provides the earliest date yet for the presence of Homo sapiens. A variety of dating methods provide an age of about 315,000 years ago (kya). Prior to this, the earliest securely dated evidence for Homo sapiens were the bones from the Omo Kibish site in Ethiopia dating to about 195 kya.

The decades-long excavation at Jebel Irhoud has uncovered various types of palaeo archaeological data. The skeletal material (e.g. skull, mandible, teeth, humerus, hip bone) shows that there were at least five individuals. The assemblage of stone tools includes examples of the Mousterian industry and the Levallois napping technique. Both of these are closely associated with Neanderthals (Homo neanderthalensis), though are not exclusive to the species. Also, the majority of the tools were made from stone not native to the Jebed Irhoud area. Other recovered evidence includes examples of fire use and animal bones (primarily gazelle) showing signs of hunting and butchering.

A variety of dating techniques helped establish the age of the new assemblage at 315 kya. The research team measured sediment from the different stratigraphic levels for the quantity of radiation present. They used electron spin resonance on bone samples. Finally, the researchers applied thermoluminescence to the stone tools that were in direct association with the bones. Unfortunately, the research team was unable to extract DNA from the bones. 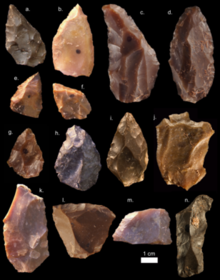 The importance of the evidence is twofold. First, it secures a mature development of Homo sapiens over 100,000 years earlier than previous evidence indicated. The date does not remove the firm placement of Homo sapiens within the Middle Pleistocene and during the Middle Palaeolithic. However, a date of 315 kya does provide overlap with the existence of Homo heidelbergensis. Previous evidence indicated that Homo sapiens developed from Homo heidelbergensis between 300 – 200 kya. The Jebel Irhoud data do not exclude this hypothesis but it means that Homo sapiens must have developed much earlier, probably closer to the nadir of Homo antecessor. It also means that Homo sapiens had much longer contemporaneity with Homo erectus than previously known.

The second important aspect is the location of the finds. Morocco is around 3,400 miles from Ethiopia. The prevailing models of human evolution place the development of Homo sapiens in Ethiopia. This makes sense based on the quantity and age of data recovered from sites in Ethiopia and in East Africa. The location of the new finds, and the fact that the fossils represent developed Homo sapiens, indicate that our ancestors had already moved across the continent in viable population sizes so the broad evolutionary changes that resulted in our species had already occurred.

The Jebel Irhoud evidence does not lessen the importance of East Africa in understanding the development of our species. Rather, it contributes data to provide a richer, more robust picture of hominid development and migrations across Africa and the world. It is quite exciting to imagine what else the excavation will recover to further elucidate the history of hominids and Homo sapiens. What are your thoughts?