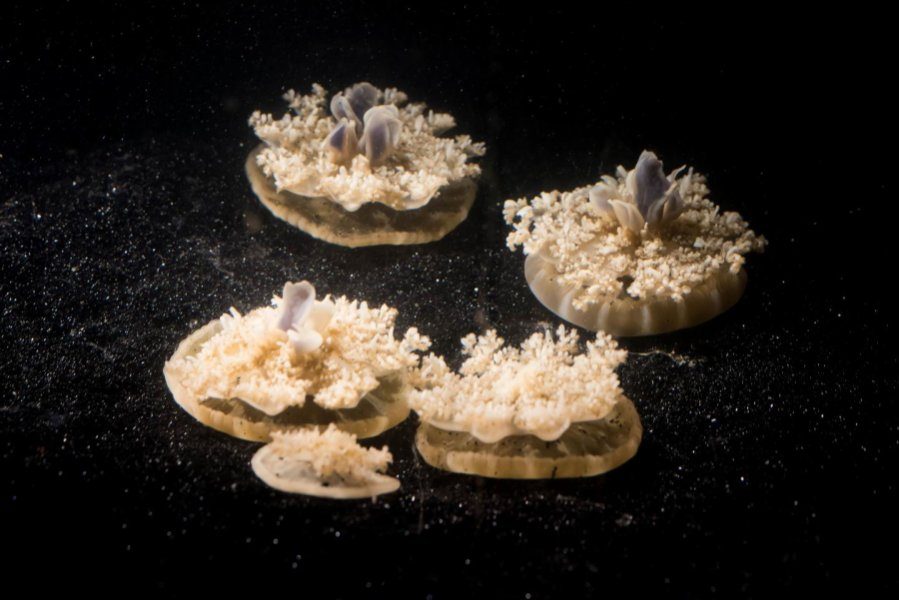 Sleeping is widely regarded as a good way to recharge your brain, but that raises a particularly perplexing question: do animals without brains sleep? The answer is, surprisingly, yes, at least when it comes to jellyfish.

Earlier today, three graduate student researchers at the California Institute of Technology (Ravi Nath of the Sternberg laboratory, Claire Bedbrook of the Gradinaru laboratory, and Michael Abrams of the Goentoro laboratory) announced they have discovered that jellyfish sleep. You probably wonder how the team was even able to quantify what would be considered sleep in animals without brains or spines, but before they started the experiment, the researchers debated, considered, and finally devised the three necessary criteria for sleep that they used in the study:

These criteria were devised by examining sleep in other animals, including humans. “When humans sleep, we are inactive, we often can sleep through noises or other disturbances which we might otherwise react to if we were awake, and we’re likely to fall asleep during the day if we don’t get enough sleep,” explained Bedbrook.

The jellyfish chosen for the experiment study was the most evolutionarily primitive one on the planet: a Cassiopea jellyfish, or just simply Cassiopea. Unlike most jellyfish, Cassiopea spends most of its life lying upside down on the ocean floor like some weird, fleshy, pulsating sea plant. During the study, cameras monitored this animal 24/7, and the researchers noted the jellyfish pulsed slower at night, 39 times per minute instead of the regular 58 times per minute during the day. This slower pulse fulfilled the “period of reduced activity/quiescence” criterion, but what about the other two?

To show that the Cassiopea react slower during this period of reduced activity, the researchers placed the jellyfish on a platform in the study tank and pulled the platform out from under it when it started “sleeping.” Normally, Cassiopea would immediately swim to the bottom of the tank, but at night, the team discovered it floated listlessly in the water for up to five seconds before heading to the tank floor. This suggests the Cassiopea jellyfish isn’t readily aware of its environment when it enters a period of quiescence, which fulfilled another sleep criterion and left the final one, an increased desire to sleep when deprived of sleep.

The only way to show that animals experience an increased desire to sleep when deprived of it is to, well, deprive them of sleep, which is exactly what the team did; they “poked” the Cassiopea awake by pulsing water at them every 10 seconds for 20 minutes. Just as the researchers predicted, the jellyfish fell asleep during the day, thus fulfilling the final criterion and demonstrating even jellyfish sleep. However, the researchers considered the possibility that the period of quiescence wasn’t sleep but instead some analogous sleep-like state, so they exposed the jellyfish to compounds known to induce sleep in other animals, such as melatonin. The jellyfish reacted just as the researchers predicted, which, according to Abrams, means the mechanism determining the Cassiopea‘s sleep is “similar to those of other organisms — including humans.”

I know what you’re thinking: why is determining if jellyfish sleep so important? Well, normally when we think about sleep, we think about resting our brains to convert short-term memory into long-term memory and to rejuvenate our cognitive functions. However, jellyfish don’t have brains and thus don’t have memories and cognitive functions as we know them, which raises the question: why do jellyfish need sleep? The study might not shed any light on this particular question, but, according to Nath, “This finding opens up many more questions: Is sleep the property of neurons? And perhaps a more far-fetched question: Do plants sleep?” Only time will tell just how much we can discover about sleep, including its evolutionary origins.