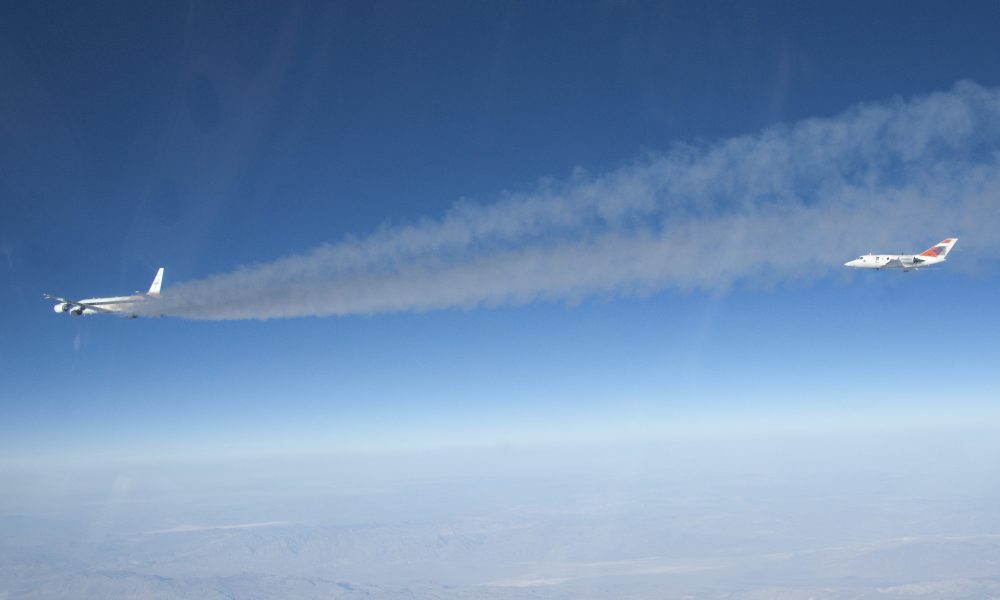 Our skies are constantly criss-crossed by jets carrying people all across the world. On a clear day you can see the trails they leave. You know, those Contrails that your odd-ball uncle says contain chemicals put there by the government to control all our minds. These innocent looking white trails might not be part of a sinister government plot, but they are a major source of pollution. Some pretty impressive flying allowed researchers to collect data on the emissions released by the engines of a DC-8 plane. The results were analyzed as part of a cooperative international research programme led by NASA. The study shows that Biofuels could be a key tool in the fight against climate change.

The study is significant because it shows that a 50/50 conventional fuel/Biofuel mix, could help reduce the Emissions caused by Jet Contrails by between 50 and 70%. Even 50% would be a pretty huge step forward. Jet engines produce Contrails, or condensation trails, are large line shaped “clouds”. They are primarily made of water but also trap the pollutants released by the engines’ exhaust. Scientists also believe that the Cirrus clouds they produce could contribute to climate change.

The pollution released by a jet flight is pretty scary. One round trip can produce a warming effect equivalent to around 2 to 3 tons of carbon (Around 1,800 to 2,700 kilos for those of us who use metric). Given that the average American generates about 19 tons a year (17,200 Kilos) this can make up a pretty huge chunk of your carbon footprint.

Before you all go running to shove corn into the nearest Bowing 747 fuel intake, there are limitations here. Even though emissions were reduced overall, soot particle numbers still remained high. You can also only use Biofuel if you reduce the amount of land set aside for food-growth. On top of this Biofuels remain expensive to produce and are unlikely to be commercially viable for some time.

Nevertheless, this study is promising and demonstrates that there are many ways that we can reduce our impact on the planet, if we are a little creative.