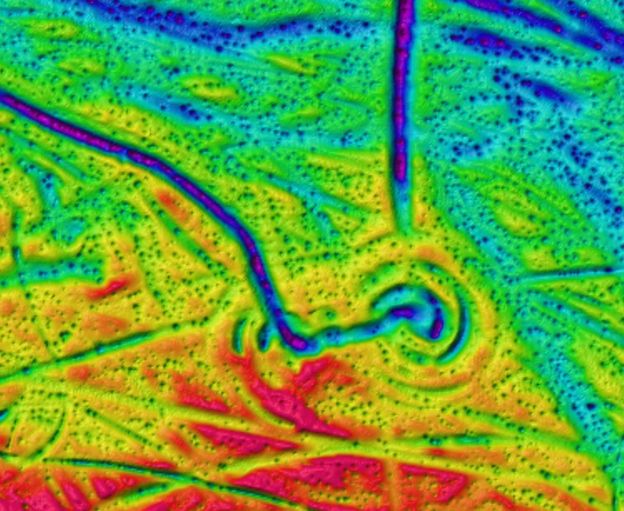 Icebergs have always been forces to be reckoned with, notoriously concealing the majority of their mass below the surface. Approximately 90% of an icebergs is concealed underwater, a trait that led to the disaster that fell upon the ill-fated Titanic. But what are icebergs, and why are they floating around in the sea? In contrast to the saltwater in which they float, icebergs are pieces of frozen freshwater. Saltwater would require much lower temperatures to remain frozen, hence the use of salt to de-ice roads. These pieces of ice are the result of breakages within glaciers, with the effects of force or heat causing a piece of ice to break away. These smaller pieces of glacier more commonly known as icebergs, can then form into pack ice. If allowed to venture into shallower areas of the sea this can then gouge up the seabed.

It is this distinctive trait of gouging that causes icebergs to create ‘doodles’ in the seabed. These doodles aren’t just pretty pictures, however they do rather wonderfully illustrate the beauty of nature. Every mark, swirl and line shows the movement of an iceberg. The Geological Society of London have spent the last 4 years compiling these doodles. This ‘atlas’ shows the changing landscape of sea beds across the world, with images from over 20 countries. 250 scientists have worked on this masterpiece, which will be a focal point of the European Geoscience Union General Assembly. They’re meeting this week in Vienna, and will be discussing a wide range of ideas around the field of geoscience. The information about iceberg doodles will be presented by Dr Kelly Hogan, who works as an editor for the British Antarctic Survey.

So, what do iceberg doodles tell us?

These images are undoubtedly beautiful but what is the practical use for these glacial imprints? Well, the movements of the icebergs that generate these striking images reflect weather patterns. From studying this atlas of the sea beds scientists can gain an understanding of climates and their histories. Speaking about this research, Dr Hogan added that “We can see where the ice has been and what it’s done, and this allows us to compare and contrast. Looking at what has happened in the past can help us understand what may happen in the future with modern ice sheets as they respond to climate change”. So, much more than just providing a glorified weather report, these doodles can help track global warming. But, alas, they do not provide a solution to this ever growing threat to the environment.

Samantha JacksMay 2, 2017
Read More
Could Brexit be about to trigger environmental decline?
Trump Loses Battle with Congress on Budget for Research. NIH and NASA Are the Beneficiaries