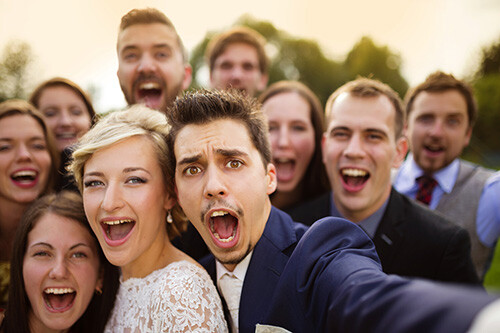 Group selfies have become the norm for just about any social circle these days, as friends gather around to squeeze into a picture together. However, it looks like Apple is in the process of making a group selfie possible without actually being physically near the people you want to pose with.

The company has won a new patent for what is called “synthetic group selfies,” as is reported by The Verge. The idea is that a group of people would be taking their own individual selfies, but then this software would make the finished product a picture of all of the people as if they were together. The following is a mockup of what this would look like:

The patent application would suggest that someone would initiate a group selfie, and then invitations would be sent out to those they want to join them. Accepting the invitation would cause the users to be arranged according to the frame, resulting in a picture where everyone appears to be together. It remains to be seen how realistic this will end up looking, but considering Apple’s knack for pushing boundaries this could end up being an impressive new feature.

Of course, we need to keep our expectations in check, as Apple files many patents that ultimately don’t come to fruition. Also, they filed for this particular patent back in 2018, and the patent was just recently granted. This could mean that it’s something they are looking to start developing in the near future, or could just end up being a “possibility” that they may or may not ever get around to. As always, we’ll bring you more information as it becomes available.