Get a Star Wars app makeover from Google – “Choose your side” 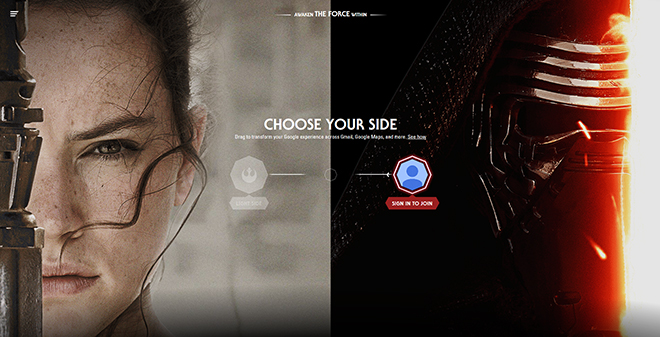 Get a Star Wars app makeover from Google – “Choose your side”

I would say that this is a good marketing move, but I honestly don’t think that more advertising was needed when it comes to Star Wars: The Force Awakens. Apparently, employees who work at Google, more specifically fans, wanted to work on a tribute for the upcoming Star Wars movie the minute they heard about it. Still with just weeks before the Star Wars: The Force Awakens movie is going to be released, having some fun with the Dark or Light side won’t hurt anyone.

This partnership is for apps like Gmail, YouTube, Chrome, Google Maps and other Google affiliated apps and it will let you choose between the “Dark Side” or “Light Side” based on your inner self, but apparently neither of the sides have cookies, bummer. These changes will happen on every device such as iPhone, iPad, Windows, Android, Mac and Chromebook, so no Star Wars fan could be left without a app makeover.

Apparently every app will have a different theme of Star Wars, for example the app Waze will get a voice guidance of C-3PO or the loading from YouTube and Gmail will turn into lightsabers. Also, your calendar will be filled with Star Wars related events so you won’t be able to miss out on any of them, even the Android Wear gets a Star Wars themed watch face.

If you are prepared to choose a side, be sure you are logged in into your Gmail account and have fun here, where the Force awaits. Also, if you are one of the indecisive ones, don’t worry, you can always switch sides. Even if you are not a Star Wars fan, this makeover, although kind of excessive, sounds like fun.