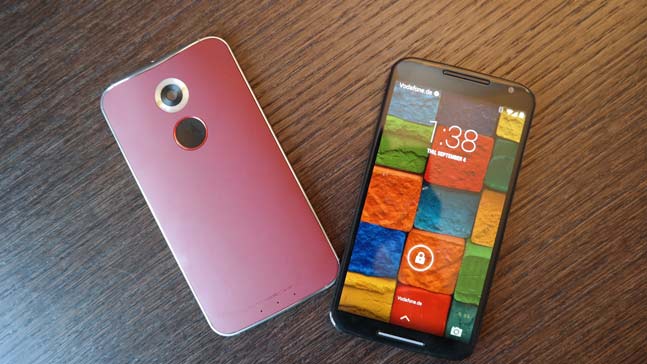 Motorola’s 2014 Moto X Pure Edition is getting the Android 5.1 Lollipop update as we speak! Although surprising, it seems that Motorola has sped up the process and released the update. Although this is just an update for the Pure Edition Moto X 2014, you can be certain that someone somewhere will grab the update and when they do, we’ll be right there and will share it with you!

The Moto X Android 5.1 Lollipop update just started rolling out to owners of the Pure Edition of the device, who have shared the details with us. The Android 5.1 Lollipop update bears version number 23.11.14 in the United States and it is the first time it has been actually spotted outside of Brazil, where the rollout began a few weeks ago. Even if Motorola themselves did not announce the update, it seems like they prioritized well this time.

Specifics of the Android 5.1 Lollipop update don’t differ from the one rolled out in Brazil, so you will be getting an improved notifications systems, the new chop twice flashlight gesture that everyone was raving on about on Twitter at one point, ART runtime improvements, camera improvements (which were long-awaited), and more. One notable feature that Motorola added through the Moto X Android 5.1 update is improved device protection.

Device protection will now keep your phone locked when lost or stolen, so your data can be safe no matter where your phone ends up being. Although we can’t speak for the performance improvements that Motorola and Google promised with the update, we’re looking forward to testing it ourselves. We will be back as soon as we can play around with Android 5.1 a bit and see if there are any bugs left in the software.

Those of you who own a Moto X 2014 Pure Edition should check for updates, in case you haven’t received a notification about Android 5.1 coming in. Before letting it run its course, make sure that you have a good Wi-Fi connection and a full battery. Having a backup of your data is also recommended, although updates going bad is a rare occurrence. Nonetheless, always be conscious about the effects of updates.

After the Moto X 2014 Android 5.1 update is installed on your phone, you should expect a bit of battery drain and sluggishness, but that should only last for the first couple of charging cycles. To fix bad battery life with the update, we recommend you do at least three charging cycles. You need to completely discharge the phone’s battery, then set it to charge. While it’s charging, refrain from fiddling with it, as it will hurt the charging cycle. Resume normal use after the battery is at 100 % and repeat at least three times. Report back to us about your experience with the Moto X Android 5.1 Lollipop update!