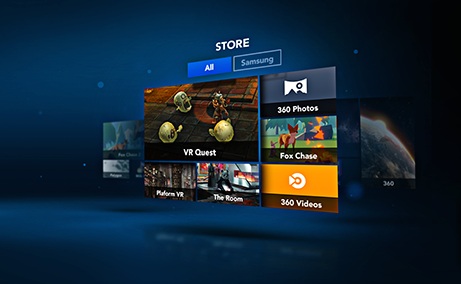 Oculus revealed its latest service during the Oculus Connect conference. Entitled Oculus Platform, this service is a marketplace that allows virtual reality developers to easily sell their software. In many ways the platform is very similar to Valve’s Steam and basically serves the same function. The service will launch later this Fall and will initially only support the Samsung Gear VR headset, but eventually it will also be available for iOS, Android, Windows Phone, Firefox, Chrome, Safari, Internet Explorer and the Oculus Rift. Needless to say, this is a very useful feature to have as there are very few places that sell apps for virtual reality devices at the moment.

It’s not surprising that Samsung’s Gear VR has priority here given that the device was co-developed with Oculus. However, the store will also be very useful for the company itself once it launches its own virtual reality headset – the Oculus Rift. In the meantime, Oculus will provide customers with a selection of its own apps such as Oculus Cinema and Oculus Photos and Videos. The company will also make its apps open source in a effort to help developers interested in this venture. According to Oculus, the main goal of the platform is to help VR developers make some money by selling their software, although they will not be able to do it from the get go. When the Oculus Platform launches this Fall it will only allow developers to offer their products for free so there won’t be any actual buying and selling at first.

As for the platform’s similarity to Steam , this is no coincidence as ex-Valve employee Jason Holtman played a large role in creating the Oculus Platform and he used his experience with Steam to do it. Indeed, he can be credited with making Steam into the most popular online gaming store around so the folks at Oculus definitely made the right call when they hired him back in June.

Zach RileyNovember 5, 2022
Read More
Scroll for more
Tap
Motorola says that pre-orders for their latest products will begin on Tuesday
Apple is reportedly planning to drop the Beats Music service and focus entirely on iTunes