NASA unveils flying saucer technology, to be used for the 2035 manned mission to Mars 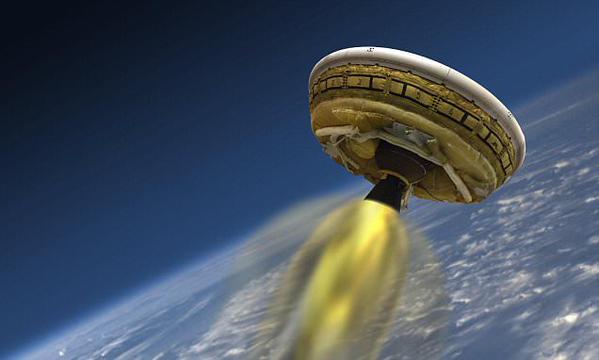 NASA unveils flying saucer technology, to be used for the 2035 manned mission to Mars

It seems like flying saucers are real after all even if they don’t actually come from outer space. No, the flying saucers I’m talking about have not been created by an alien civilization from a distant planet, rather, they are being developed by good old NASA right here on Earth. Although it may sound like the agency is planning to build some sort of crazy circular spacecraft, in truth the flying saucer will function more like a parachute than anything else and will be used in conjunction with an actual spacecraft. The purpose of this technology is to aid the spacecraft that will carry people to Mars by slowing it down as it enters the Red Planet’s atmosphere.

The first manned mission to Mars in human history is only scheduled to launch by 2035, but it looks like the researchers over at NASA are already hard at work and carefully planning everything down to the smallest detail. Since landing safely on Mars is just as important as successfully launching from Earth the idea of an inflatable flying saucer is actually a great feature to have on a spacecraft that plans to make history in the not too distant future. This new technology is part of NASA’s Low-Density Supersonic Decelerator (LDSD) project, which does exactly what its name implies.

The reason for why such technology is even needed in the first place has everything to do with Mars’ very thin atmosphere. The manned spacecraft en route to Mars will naturally travel at very high speeds and the thin atmosphere will likely do a pretty poor job at slowing it down as it descends to the surface. Luckily, NASA’s inflatable flying saucer acts like a parachute and provides some much-needed drag, which is going to be essential if our very first Mars colonists are to land safe and sound on the planet. The space agency will launch an unmanned mission to Mars in 2024 to test if this technology can actually work as intended.

In the meantime, NASA is conducting a high altitude test a bit later today at the U.S. Navy Pacific Missile Range Facility in Kauai, Hawaii. For the purpose of this test, a giant balloon will carry the flying saucer up to an altitude of 180,000 feet at which point a giant airbag will inflate around it as it drops back to Earth. Ideally, the airbag should slow down the saucer by quite a considerable amount, however, the system also features a 100-foot supersonic parachute that will slow it down even more. “That airbag helps it slow down by adding more area and drag,” said NASA’s Steve Jurczyk for Fox News. “Then we deploy a supersonic parachute about 100 feet in diameter.” He also added that “with this LDSD technology we hope to land about five metric tonnes[onMars], that will enable more capable robotic missions.”