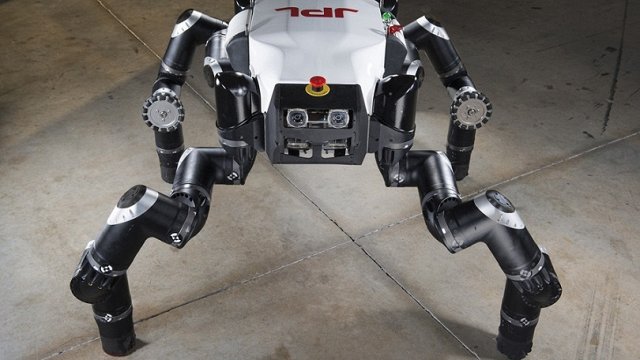 It seems like NASA is everywhere these days, including at DARPA’s Robotic Challenge Finals apparently. The space agency’s Jet Propulsion Laboratory division is scheduled to compete this weekend with their intriguing, yet somewhat creepy RoboSimian. True to its name, the RoboSimian is a monkey-like robot that many expect to actually win the competition, although much is still uncertain considering that it will have to go up against a bunch of equally interesting machines. DARPA’s Robotic Challenge Finals will have a total of 24 teams from all over the world and their robots competing for $1 million in Pomona, California. While most of the participating robots have been designed to look as humanoid as possible, NASA went in a completely different direction with the RoboSimian, one of the few machines there which uses four limbs for locomotion instead of just two.

At first glance, it may seem like this is just another “who can build the best robot” contest, and it is to some extent. However, each team has specifically designed their robot with a higher purpose in mind, such as helping out in certain situations that would be too dangerous for humans. NASA’s RoboSimian for example, was designed by their Jep Propulsion Laboratory branch as a first-response vehicle that can enter disaster zones and navigate all types of terrain. In order to achieve this, the chimp-like robot was equipped with four rotating arms with which it can walk across debris or even climb over them if need be. In addition, RoboSimian can walk equally well forward, backward or even sideways, and all its limbs are capable of using a variety of tools. What’s more, NASA also gave the robot multiple sets of eyes that have been distributed across its body in order to maximize visibility.

NASA’s Jet Propulsion Laboratory certainly built an impressive machine here, however, the DARPA Robotics Challenge Finals will test it to its absolute limits. If RoboSimian wants to win the competition it will have to open valves, cut holes in the wall, successfully navigate difficult terrain and even drive a vehicle. Despite all of this though, the folks over at JPL are pretty confident in their creation and expect RoboSimian to beat its competitors. With experienced teams from all over the world and several Atlas models to go up against, the mechanical monkey will definitely have to perform exceptionally if it wants to bag the $1 million and the bragging rights associated with winning such a difficult competition.

How to use Spotify from any country in the world, even the unsupported ones
Samurai robot outperforms world renowned Japanese sword master