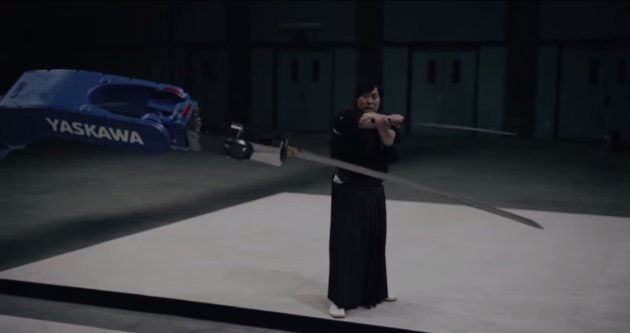 The samurai of old are widely regarded as being among the best warriors that ever lived, and with good reason. Although those days are long gone, the Japanese people are still keeping their traditions alive to some extent, which is why you can still see sword masters wielding katanas even today. However, times are quickly changing and it seems that even the most skilled human swordsmen around have a hard time competing against the samurai robot built by Yaskawa. If you’ve been paying attention to the latest technological advancements you probably already know that highly advanced humanoid robots are still several years away, however, the samurai robot in question doesn’t actually need a full body because it can apparently outperform a sword master with just one arm.

Admittedly, the robot learned all it knows by analyzing its master, Japanese swordsman Isao Machii. As part of Yaskawa’s Bushido Project, Machii agreed to have a bunch of sensors strapped all over him while he was performing some of his best moves. Thanks to motion capture technology, the samurai robot was able to learn said moves and perform them as skillfully and accurately as its master, perhaps even slightly better. What’s most impressive about this whole thing is that the robot didn’t seem to have any trouble at all with the whole slicing and dicing despite the fact that it seemed a bit sluggish at first glance. Meanwhile, Machii was really breaking a sweat towards the end while performing the thousand cuts demonstration.

If you want to see the robot samurai vs master swordsman video make sure to check out it below. Oh, and keep your eyes peeled at around the 3:00-minute mark if you want to watch the robot perfectly slice a runner bean sideways.