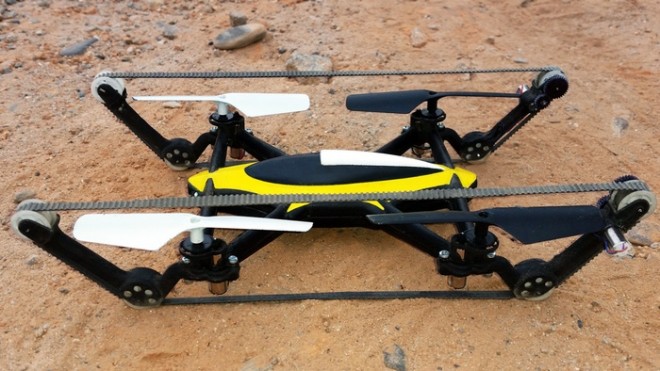 By the end of September and beginning of October, Witold Mielniczek started a fundraising for a prototype drone called B-Unstoppable. The drone promises to be the first of its kind as it is a TankCopter Drone, meaning it can fly, but also drives on ground. This ability comes in handy on all kind of terrains and the drone promises to switch on the spot from ground driving to flying, all while providing 360 view from its camera.

The design of the TankCopter Drone is similar to a quadcopter that has caterpillar tracks which adjust to the terrain and make the drone look like a tank. Even more, the device weighs only 84 g, so it is a small sized, low-cost drone that can easily be used indoors or outdoors.

The TankCopter is powered by a 900 mAh Li-po battery that promises 13 to 15 minutes of combined driving and flying. For flying, the battery assures about 9 minutes, while for driving the drone can last up to 20 minutes. The drone has powerful motors, a 2.4 GHz radio transmitter and front and back lights to assure night operation. As for the controller of the TankCopter, it is used as for any other quadcopter, but when it comes to driving the tracks, they are controlled separately, so you can fully experience the way of driving a tank.

Depending on what type of TankCopter Drone you want, its creators will build it in three forms: A simple B-Unstoppable that cost under $100, the TankCopter with a DVR Cam attached and the final version of the drone that has a FPV System included, both which will remain in the $120-160 price range.

The B-Unstoppable Drone Indiegogo Campaign still has 31 days to accomplish its goal and if you are interested in contributing you can do that here. There is also a contest in which you can win a Tank Copter Drone, so do check the project out. If they get enough support, the creators expect to mass produce the drone by February 2016 and start to ship it to their backers by the beginning of March 2016. All you drones enthusiasts out there, here is your chance to be part of the making of a unique and low-cost TankCopter Drone.

Twitch app for PlayStation 4 has been released
Spotify is the No.1 app in Apple’s App Store