Autonomous Delivery Robots Will Make Their Debut In Virginia 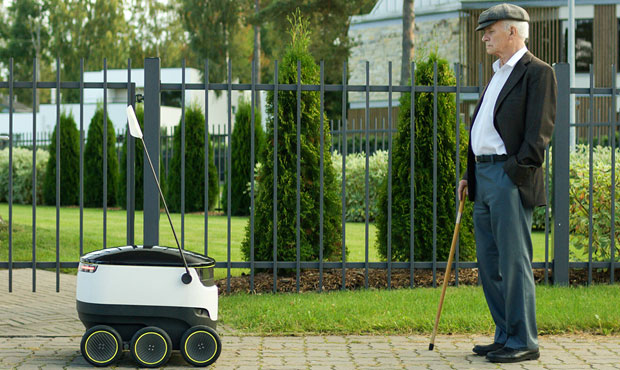 technewsworld.com
Autonomous Delivery Robots Will Make Their Debut In Virginia

Governor of Virginia Terry McAullife signed a law permitting use of Starship Technology’s Personal Delivery Devices. These autonomous delivery robots will be able to travel on sidewalks, crosswalks, and shared-use paths to deliver groceries and other parcels. The Personal Delivery Devices, or PDDs, will be able to deliver items within a 2 mile radius in 15 to 30 minutes. The robots are honestly pretty cute, and resemble six-wheeled coolers.

Each PDD weighs about 40 pounds and can carry up to an additional 20 pounds at 4 mph. There’s always some concern when it comes to autonomous moving technology, as many worry about the potential for accidents. The Personal Delivery Devices will supposedly obey all traffic laws, pedestrian control devices, and signs, but it still remains to be seen how effective they will be. Autonomous AI has made leaps and bounds in the past few years, so it’s definitely possible things will be totally fine. Still, part of me is nervous when it comes to trusting a robot to obey the rules of the road.

It seems the government had the same concerns, as each PDD will be monitored by Starship’s “Fleet Management App”. It’s comforting to know that, at least at first, each PDD will be monitored by a human that can account for any error. I think as autonomous AI becomes more and more prevalent, people won’t have these concerns as much as they do now. I envision a future where these sort of things are common place, but with how new the technology is it’s reasonable that people are slightly concerned.

Virginia’s law is the first in the United States to govern autonomous delivery robots.