Yahoo core future in the air amid rumors of Alibaba acquisition 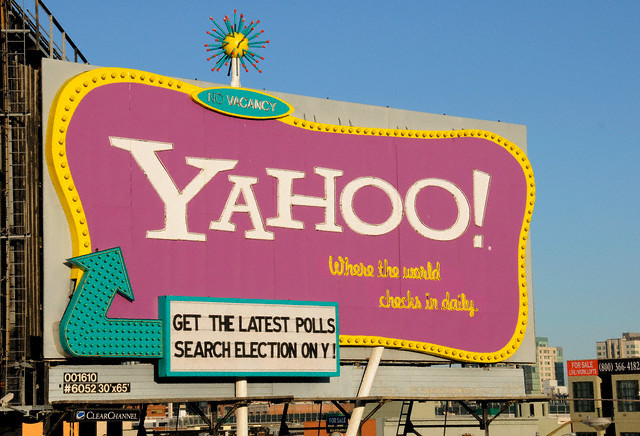 Yahoo core future in the air amid rumors of Alibaba acquisition

Although Yahoo is a company we’re just as nostalgic about as Nokia, the company has been keeping its head out of deep waters for the past few  years, albeit not without sacrifices. Despite trying to mend the dropping share prices, vanishing popularity and thinning of its user base, Yahoo doesn’t seem to be doing well and the recent exec reshuffle points towards a future that might not see Yahoo’s core business flourish.

Yahoo’s board of executives is holding a meeting this week, according to the WJS, during which they are reportedly going to discuss the future of the core business and a possible acquisition by established ecommerce and search engine giant Alibaba. The execs will most likely negotiate a deal to sell Yahoo to Alibaba, since coming back from the steep fall the company had this year might require more investment than it would manage to return in time.

Selling Yahoo to Alibaba shows just how much the search engine and mail client lost of its popularity with users and with the enterprise in general. With the rapid growth of Google in the personal and enterprise service space, it’s no wonder Yahoo found it hard – if not impossible – to keep up or even innovate in the field.

Despite occupying a spot in the top ten most visited sites of the U.S., India and Mexico, Yahoo’s legacy might have come to an end. Current CEO Marissa Mayer is taking the fall for the company’s decline, seeing as they moved from Google’s ranks into the company in an attempt to revive it. Clearly, they bit off more than they could chew – if there was anything left to chew, that is, and failed to bring any significant improvements to the company’s financial situation. Having acquired Tumblr and Polyvore didn’t help much, either.

Since Yahoo has its own shares in Alibaba, worth more than its own in the Japanese sector of the company, at about $35 billion, a possible spin-off of these investments is just as much a possibility as a buyout from the Chinese giant. The company is in a pretty tight pinch no matter which options it considers, seeing as activist investors have already called for a solution in the form of selling the core of Yahoo.

By the end of the week, Yahoo’s future will have been at least decided, if not acted upon, after Yahoo execs meet with Alibaba executives as well as investors and private equity firms that have shown interest in the company. After the series of meetings are over, we are most likely going to find out whether the company will be spinning off its Alibaba shares, selling its core business or doing both at the same time, cutting costs and essentially admitting defeat. Readers who use Yahoo, tell us: how fond are you of their services and what do you think Yahoo could do to wobble out of this pinch?