Human-Robot Cooperation In The Workplace 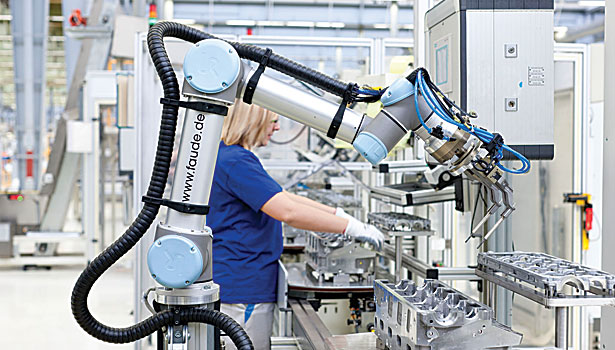 Human-Robot Cooperation In The Workplace

While robots can provide a more reliable and durable manual labourer, we still need humans to both aid and control these robots for now. German robotics researcher Fraunhofer has created a new system to allow both humans and machines to interact in a safer and more controlled environment than previous systems. Having to be sectioned off and isolated, Fraunhofer believes that human-robot cooperation would be more efficient if they were allowed to interact freely.

Many people still reject the integration of robotics’ into the workplace for fear of losing both job and limb. This is not an uncommon occurrence with 20 incidents of accident involving a robot since 2000, most of the time ending fatally (According to the OSHA). Fraunhofer expects to put an end to incidents like these with its new technology incorporating tracking cameras combined with rows of sensors to compliment . The green light will show that indicates a safe environment for the robot to move freely and at a normal speed, but if it detects a moving object it will slow down and execute safe movements relative to the person’s location. Stepping too close will activate the red zone and stop movement altogether. Not resuming until recognizing you are a safe distance away from the machine.

Once technology catches up with all workplaces then we can begin to nurture a safe and mutually beneficial relationship in the workforce. While many experts say robots will more than likely take over more than half of the job market, for now they still need us. This is the perfect time to enjoy all the benefits of having a much stronger work companion who never gets tired. We’re not obsolete yet people, we may even be approaching the golden age of being the babysitters for now. None of the heavy lifting, yet still needed to run the show.