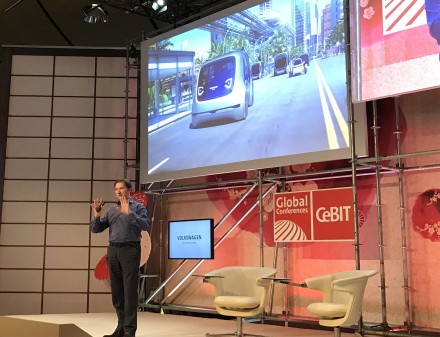 The announcement of an autonomous car in development is not exactly breaking news these days. After all, many major car manufacturers are working on including the technology to let cars drive themselves. Volkswagen wants to take it a step further, though, with a smarter car that interfaces more cleanly with the human experience.

Chief Digital Officer at Volkswagen Johann Jungwirth gave a presentation where he spoke on the future of artificial intelligence at Volkswagen and at large:

“AI is everywhere and it will take on a central role in the car of the future. No one expects it to replace humans, but to complement us where it can – in the dashboard, for example. Today you have to push seven or eight buttons before you find what you’re looking for on the in-car entertainment system. We want to reduce that number to one – if not zero.”

If Volkswagen has their way, soon our simple voice and gestures will be enough to control the AI in our cars, eliminating the multi-step process usually involved in adjusting car settings. “The car recognizes its driver’s expressions, mood, and destination. By monitoring location data and road behavior, the user experience adapts to each specific situation.”

Jungwirth spoke on the safety of autonomous cars, claiming that we’ll see far less accidents when the majority of cars on the road are controlled by artificial intelligence rather than humans who are prone to error. The CDO envisions a future where parking will become far less of a hassle as well. Autonomous cars will drop you off at your front door and find a place to park by themselves, summonable with the press of a button when it’s time to leave again. This innovation could prove especially useful for those living in city environments where finding parking is quite the chore.

This idea will likely remain a concept, but I imagine in the next 3-4 years, ideas like this could start to become a reality.