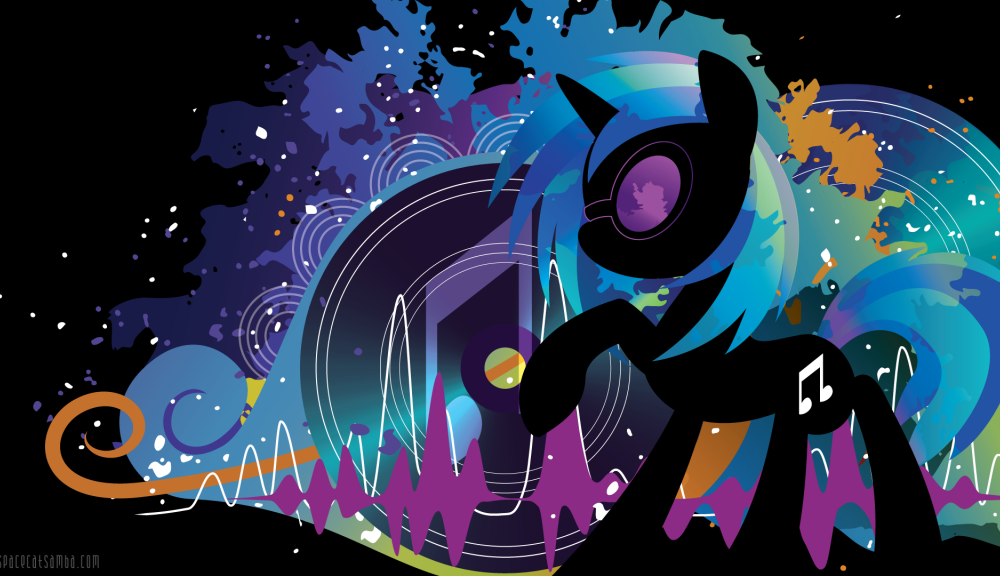 Let’s continue the antics of My Little Pony fanwork in #MLPMonth. How about we start by sharing a Top 10 list that involves fan created songs that bronies have made? It seems like a very excellent choice for a Top 10 list, right?

The Top 10 will be as varied as possible and there will be some repeated artists, so that’s a fair warning. Also, I don’t hold a distinction between instrumental and lyric-based songs, every song deserves recognition. Without further ado, let’s go over the 10 best My Little Pony songs created by the fans of the show.

This was one of the first songs I’ve listened to when I was starting to get invested in the fandom. The song is part of Eurobeat’s “Super Ponybeat” album, it consists on Eurobeat remixes of My Little Pony Season 1 songs.

To this day I still don’t know if this song is original material or not. However, I love the beats, the piano and the lyrics, it’s been an inspiration for many content creators nowadays even. I mean, there is only one other reason why Super Ponybeat songs are widely known but that will be its own article.

This song in and off itself can be considered a brony classic, as it has refined a lot of people’s interest in the show. However, it also feels very generic in some parts and it hasn’t aged that well, to the point I like other remixes of the same song more. But I can’t deny that this is still worth listening to.

9.- Laughter by Mando Pony and AcousticBrony.

First off, yes, I know it’s supposed to be AcousticMandoPony but it’s a collaboration effort regardless. Anyways, Laughter is part of the “Elements of Friendship” series of songs, all of them are great on their own regard. I mean, when you hear Generosity and listen to the great voice of EileMonty, you have more than enough reason to place this song in the Top 10.

Why Laughter then? Because this song is way more hyperactive with its instrumentation (Much like Pinkie Pie herself). It also includes some 8-bit instruments that actually feel natural to the composition itself. It’s funny when you think about it considering Mando Pony was known for his 8-bit mixes.

I simply find myself returning to “Laughter” more than any other of the “Elements of Friendship” songs. And it’s not like the other songs are shabby, it’s great to listen to the guitar solo in Loyalty, the excellent pacing in Kindness and the magnificent composition in Generosity. Overall, these songs all deserve a good listen.

How can you make something like My Little Pony into Pop and Rock? Forest Rain originally answered this question back in March 2012 with the song Join the Herd. A great song that had some incredibly fast paces vocals at the time.

Not only that but it also tells the story many of the show’s greatest fans had with the show. Including myself, the story of a guy who wonders what the heck this MLP Craze is about until they see a very good show that is worth following.

Sadly, this hasn’t aged that well and you notice Forest’s voice trying really hard to reach high pitch notes and failing. That’s why Forest remade it with better instruments and a catchier beat with the same composition. It’s a good remake of a song that shaped the fandom back when it exploded.

I expressed my frustration on Twitter when I realized that it’s simply impossible to talk about the best brony songs without bringing up work from Acousticbrony.

To be honest, when it comes to his Mane 6 themes, it’s kind of hard to make a call as to which is better. Mostly because the themes are built around what a person prefers in terms of music and instrumentation.

When I picked Balladshy, it’s because it reminds me of the Legendary Theme from Gitaroo-Man. A slow paced tune that can make history just by listening to it. And It’s never a bad thing to listen to a love ballad while doing things such as writing or even taking a hike. This tune definitely deserves the recognition and praise it got ever since it was released.

Obvious choice is painfully obvious, A Tropical Octav3 just hits the right spots when it comes to its composition. The pacing feels consistent and excellent, what I like the most about this song has to be the lyrics. Which also take a story-based approach, this time it’s a shipwreck story between fan favorites Octavia and DJ-PON3 (Or Vinyl Scratch).

The lyrics are hard to nail though, and that’s a fact because I can never find myself to be able to consistently sing them. However, I love the pacing and the fact that it’s a very funny story to listen to. It’s sad to hear that the singer himself got constantly harassed because of this and other pony songs. Not like the gaming industry has better proponents, either.

Regardless of such, this song is a very light-hearted and funny tune with some good lyrics and singer. The instrumental version is worthy of a listen as well, though. Especially considering that it has a lot of emphasis on strings and I love strings.

We meet with another remake of a song. While PrinceWhateverer is mostly known for his metal music, he’s no stranger to calmer vibes in his songs. And while I don’t agree with some his choices in regards to remakes (Constellations). I can say with confidence that Between Fairy Tales and Happy Endings is a great remaster of an already great song.

The song is originally a response to a huge controversy surrounding the exclusion of the brony mascot, Derpy Hooves. The basic summation was that the character was considered too offensive for some audiences and had to be retired. Bronies were devastated by this and this event generated a huge response. We can see the controversy in this song quite well, and spoiler alert: It’s not gonna be the last time I cover this sort of issue.

The song itself reminds me of one of my favorite songs named All the Same by Sick Puppies. A song that starts calmly and then slowly ascends into a rock/metal string. And that’s one of the greatest things this song has going for it.

What happens when you gather most of the artists on this list to make them all sing a heavy metal song? You get a fucking masterpiece with chiptune beats, rap solos, amazing vocal performance and much more in one package.

Some people might consider it a very big cluttering of collaborating artists, I consider it a very great song. Sure, there are a lot of artists in this thing but all of them are capable of achieving amazing performances on their own.

This song is a story as well, telling a POV story in events surrounding an episode of My Little Pony Season 1. It was destined to be a recipe for success and boy did it make the cut in so many ways.

How could this song not make it all the way to Top 3? A great remix of the song “So Many Wonders” that featured in My Little Pony, season 1. It became a classic for many bronies for its trance vibes and catchy tune.

The song itself is a very zen and wonderful song. It’s surrounding by singing choirs and calm music vibes while still maintaining a high BPM rate. It’s certainly a good vibe and a very addicting tune to listen to.

The few times where vocals are involved in the song are also incredible, it almost feels like Fluttershy herself is singing along to the beats. Well, except for the times her voice gets “repeated” along the beat. Regardless of such, this is a great song to listen to at any time.

2.- Finding My Way (Back Home) by Replacer

What’s that? No Cerulean Blue? Aw, shucks, I thought you’d love this song. No, but seriously, this has to be the best song Replacer has in his repertoire. It’s a very great tune that works the wonders Balladshy does and amps them up to 20.

It feels like one of those classic songs from the 70s, I don’t know why I get that feeling, though. However, the song stands out by itself with the amazing singing done by Replacer himself. Masterfully complimented by the guitar and lyrics provided by Megabyte Brony and a great guitar solo.

I just have no words to describe how amazing this song is, however. It has found itself trumped by another great song that is part of the brony classics collection. This song holds a deep meaning to me because it’s one of those I fully love and love singing to during my hikes. Much to the dismay of pretty much everything around me.

1.- The Moon Rises (Remaster) and Lullaby for a Princess by Ponyphonic.

Yes, this is literally the pick everybody would ask me about if I didn’t actually put it on the list. And really, can you discuss with the way Master Ponyphonic does his music? Giving life to underdeveloped characters Princess Luna and Princess Celestia in his own way.

On one side, we have The Moon Rises, which follows the story arc where Luna first became Nightmare Moon. The remake sung by EileMonty just shows a lot of passion that the original lacked slightly. I find myself revisiting this song quite a lot but not as much as I do with the following song in the “Musical”.

Lullaby for a Princess is supposed to be the aftermath of the entire fight that separated the two loving sisters. It’s a tragic ballad that makes it hard to not cry when you know the story behind the two Princesses and their tragedies.

Both of the songs come accompanied by animations done by Content creators WarpOut and DuoCartoonist (Which will make an appearance during the next Top 10 list). And it definitely adds to the dramatic tragedy that surrounds both of the songs. Considering that this is one of the highest regarded lore events in My Little Pony, it really isn’t that strange.

I’d love to say that there are a lot of songs I didn’t include, and I’m sure I’m going to be asked about “Discord” by The Living Tombstone, among others. But these are the best most relatable songs I could think of and the fact that there are so many more brony artists out there worth listening to brings happiness and hope to my heart.

But a few honorable mentions that didn’t make the cut for the list are Anthropology by Awkwardmarina, Shipping and Handling by P1K, Aloe Aloe by Underpony, Alicornication by zatslol and The Beatle Bronies’ song remakes.

There are also many Pony game soundtracks like Fighting is Magic, Legends of Equestria, Megapony and My Little Investigations. Not to mention the original tracks performed for the Phoenix Wright / My Little Pony Crossover: Turnabout Storm. There’ll be a lot to talk about for future #MLPMonth iterations!