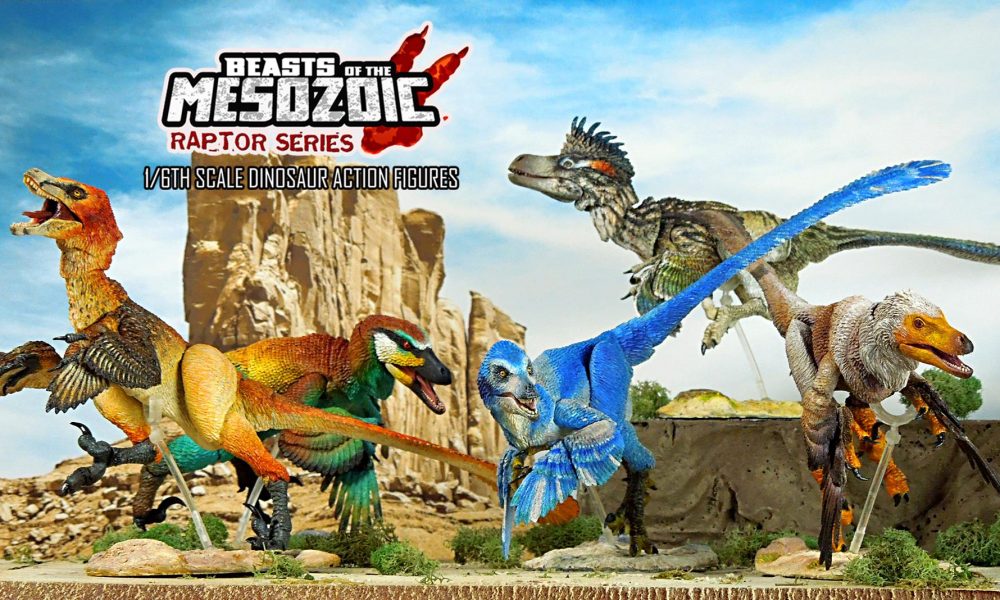 Kickstarter is the go-to site for many indie-developed products. While video games immediately come to mind, we have seen our fair share of kickstarted toys. One of the latest is something I never thought I would ever see: a line of scientifically accurate 1/6 scale posable Velociraptor action figures dubbed the Beasts of the Mesozoic. I feel like a kid in an American Museum of Natural History-themed candy store.

In April of 2016, toy sculptor David Silva started the Beasts of the Mesozoic Kickstarter project. Silva isn’t a newcomer to the toy industry; he has worked with many big-name toy companies, including Hasbro, NECA, and McFarlane Toys. Silva also owns Creative Beast Studio, a small company that specializes in dragon and dinosaur resin model kits, but he needed a little extra funding for his Beasts of the Mesozoic toy line, which is why he turned to Kickstarter. The project originally asked for $125,000 but raised $351,753, soaring past the stretch goals for toys based on additional Velociraptor and Atrociraptor species. ecosystem accessory packs, raptor hatchling packs, and “build your own raptor” packs. To say Silva’s campaign was a success would be an understatement.

Now, when I say these figures are scientifically accurate, I’m fibbing a bit. They are accurate as far as skeletal structure and body shape are concerned, but Silva takes liberties when it comes to plumage. Yes, plumage. Since paleontologists are confident most theropods, especially Velociraptors and their cousins, had feathers, Silva has given each species feather patterns and colors inspired by modern-day birds. Additionally, Silva designed each raptor with distinct feathery features. Some have long arm feathers; others have feathery crests, and a few have puffy neck feathers. Each Velociraptor and Atrociraptor looks unique, and Silva’s designs make me pray nature was kind enough to have had real raptors with colorful displays not unlike those dreamt up for the toy line.

You might wonder why I’m talking about these velocifigures if the Kickstarter ended two years ago. Well, Silva has started sending out rewards, or to be more specific, build-a-raptor kit rewards. One of these kits was sent to popular YouTube toy reviewer Pixel Dan (according to Pixel Dan, he received his kit before other backers) who posted a video review of the set, and sweet Raptor Jesus, the figure looks pretty even unpainted.

While you can’t back the project anymore, you can still pre-order the various raptor figures and accessory sets via BackerKit, as well as follow Silva on his Creative Beast Studio Facebook page. If you order the figures now, you can expect them to arrive between February and March. With luck, Silva will eventually continue the Beasts of the Mesozoic line with other dinosaurs. Fingers crossed for the Pachycephalosauridae.

Aaron GreenbaumOctober 3, 2017
Read More
Scroll for more
Tap
Loot Crate vs. The Curiosity Box: A Beginner’s Guide to Subscription Mystery Boxes
Agents of Mayhem Board Game Seeks to Improve on the Video Game