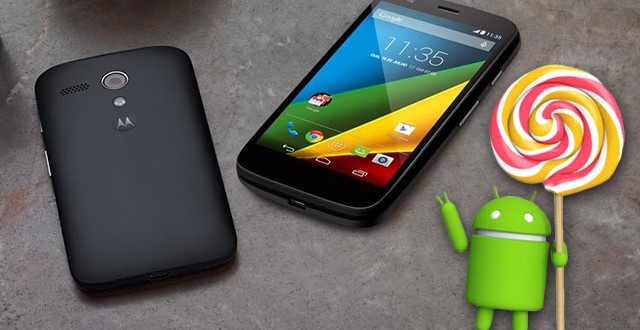 Moto G Android 5.0.2 Lollipop is now officially rolling out all over the world, with reports coming in from Europe, India and the US. Once Google optimized Android 5.0 Lollipop for their Nexus devices, the search engine giant sent out the AOSP to OEMs so that they can make the necessary changes for the software to work on other devices. Motorola is among the few companies who has little changes to make since their phones run near-stock Android. That being said, it is no surprise that Android 5.0.2 Lollipop is now available for 2nd generation Moto G and Moto X devices.

The rollout to the Moto G and Moto X had begun in December, originally, but Motorola decided to pull the update because it was causing issues in the soak-test. Until now, there has been no word on when the update would go out. Last week, users in the U.S., Italy and India started reporting on Twitter and various forums and social media platforms that they were receiving a new over the air update. It turned out that the 2nd generation Moto G was getting a fresh build bringing the version number up to Android 5.0.2 Lollipop. Since people were quite disconcerted with the previous versions on Nexus devices, many smartphone owners decided to postpone installing the OTA, hoping that 5.0.2 would bring a more stable version of the software to their devices.

Oddly enough, some 1st generation Moto G owners also reported that they had received Android 5.0.2 Lollipop, although that is most likely as part of a soak test. Motorola developers and team members stressed the existence of a soak test, since they want to determine if the updates are negatively affecting user experience. Why would Material Design be negative, anyway? The fact is that once Google pairs its updates to Nexus, it doesn’t deal with fixing issues on other devices. That responsibility lies with the OEMs and manufacturers, and as we all know, some take their sweet time (khm, Samsung).

Moto G owners are now glad to report that they can experience build number 22.21.28, aka Android 5.0.2 Lollipop. Mind you, this is a staggered rollout, and everybody keeps repeating that so that people who haven’t received the update yet don’t feel left out. Anyhow, most report that the updated software is buttery smooth, but others are still complaining about a slow camera, battery drain as well as bugs with the microSD card. One Moto G 2nd generation owner stated that the camera was worse than if it were a potato, while others said that their battery is draining like crazy, especially with alarms activated. The microSD card issue wasn’t too widespread, but one Moto G 2nd gen owner testified that every time they tried to take a picture, the microSD card would be rejected (since they probably set the SD card as main storage for photos). One of the biggest things we are concerned about is the memory leak, though.

A memory leak has been discovered in Android 5.0 (yes, in the first version and no, 5.0.1 hasn’t fixed it). That means that your phone will keep crashing apps and force-closing them because something is wrong with how RAM memory is being managed by Android 5.0 Lollipop. In the Android issue tracker, it still says that the fix is in a “future release” state, so it’s unlikely that 5.0.2 came with a fix. New issues reported in a the tracker include mention of the memory leak, explaining that a 2014 Moto G running the new update was constantly killing and restarting apps through the lowmemorykiller. Our best guess is that Google will release a minor Android 5.0.3 Lollipop update that will contain a fix for the issue.

The weird thing is that the memory leak has been present in Nexus and other devices, too, even before Lollipop was made official. There were no official statements released from Google or various OEMs addressing the issue and users experiencing them are getting more and more frustrated each day. The issue tracker is filling up with new reports daily, involving either the Moto G, Moto X, Galaxy S4 or even the Galaxy S5. Our question is: if the issue has been found and marked as a future release (for almost a month now), then why isn’t the fix being released in a minor update? The issue itself was first reported more than 2 months ago in the developer version of Android Lollipop, so that should have been enough to find a fix and release it. Alas, this whole affair is a bit confusing. Maybe it’s a conspiracy, although the point of it evades me. Have you received Android 5.0.2 Lollipop on your Moto G? If so, tell us how it feels like, how sweet is it? Also, let us know if you’ve experienced the memory leak issue we described above, mentioning your phone’s model name and number, location and software version, as well as the scenario that triggered the event.