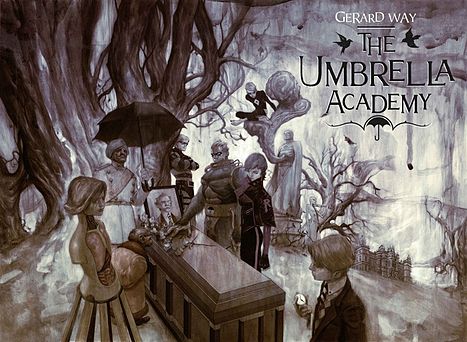 I’m writing this piece on April 25th 2015. However due to the way I create my work in bulk as opposed to publishing article by article you likely read this at a later date. Why do I bring up the date?

It’s because (by sheer coincidence) today it has been exactly six years since the last issue of “The Umbrella Academy” by Gerard Way (yes, that one) was published. He’s allegedly been working on the third series of The Umbrella Academy (entitled “Hotel Oblivion”)  and a fourth series and has been talking of making a movie since 2012.

It is also incredibly unlikely that these will come to fruition; it’s about as likely as them having line work that isn’t stolen from Mike Mignola. This is why I would like to see an animated series as an adaption, ideally consisting of two series which would keep the cartoony but dark style.

The drawback to marketing The Umbrella Academy is really because of Gerard Way’s baggage. For the record while I’m not a lover of his vocals I’d say Gerard Way is a very good songwriter and I like the music he’s made over the years however a lot of comic book fans seemed to be put off by the fact that it was written by a pop rock star and not a prior known comic book writer, in spite of the fact that comic writing and illustrating were Gerard Way’s dream job even before he became a musician. It is a shame and it’s a very silly thing to be put off by when he managed to create a very unique cast of characters and while I’ve never been particularly enthralled by the character designs (save for The White Violin) they made up for it in actually being pretty unique in terms of abilities, powers and personality.

They do prove to be quite an odd bunch that would personally entertain me more on the screen than most of the typical superhero teams that we’re getting bombarded with as of late. I can’t see any good reason not to at least attempt to adapt it, however at this rate I highly doubt we’re ever going to actually hear from The Umbrella Academy again.

Join me again next time for my final comic book that I want to see adapted to TV before I go onto some honourable mentions that I was originally going to put into the list but took out!