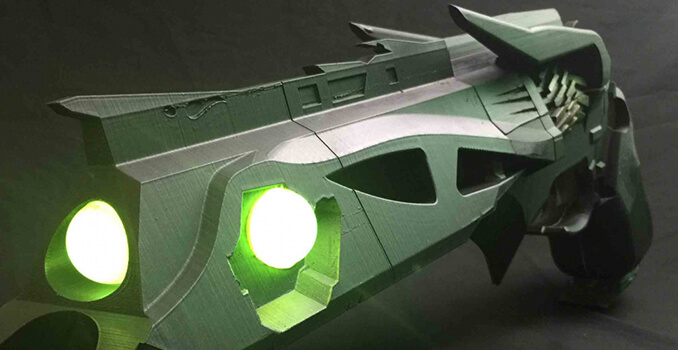 Since it launched Destiny has caught a lot of flak from reviewers and gamers over its lack of content. Bungie has tried to beef up the game’s content with expansions like the upcoming, The Taken King. What Destiny lacks in content, such as raids or strikes, it makes up for with weapons and armor.

Gamers have come to love their Destiny gear so much they have brought it to life with home-made cosplay creations. The way fans have brought armor and weapons to live never ceases to amaze. The only downside is they have to be non-functioning to keep conventions safe; but what about on an air soft range? Player Kirby Downey asked that question and came up with an awesome answer.

He decided to take his cosplay to the next level by crafting a functioning version of fan-favorite hand cannon Thorn. The full-sized pistol is a perfect replica of Thorn with a compartment for a functioning air soft gun. Downey broke down how he created the beast on 3D printing community site MyMiniFactory:

“This is a Converted airsoft version of my thorn which I designed. It is made to be a simple shroud which encases an electric CYMA Glock 18C AEP airsoft pistol… This model has bee scaled to be scale one to one with the thorn model from Bungie. This means its a beast sitting at just over half a meter long!”

Downey reinforced his Thorn replica with metal to protect it from being dropped, a common problem on air soft fields. The drawback to that metal protection is the user has to dismantle the casing to get to the air soft gun. So Thorn won’t be seen in competitive air soft play anytime soon. That doesn’t stop it from being insanely fun to look at or use for target practice.

Hopefully other fan or even Bungie will follow Downey’s example here to start making their own functioning Destiny inspired weapons. In the meantime we can still enjoy this live sized Thorn.