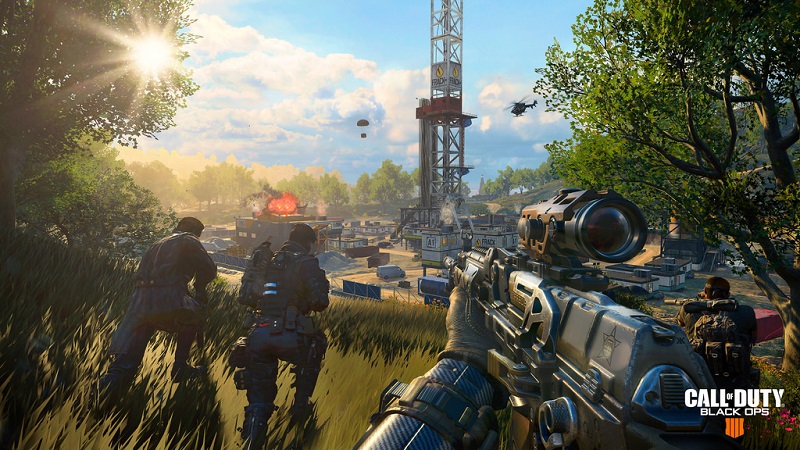 This information was revealed by GitHyp, which published some analysis on how each game is doing in the popularity category on various platforms. It reveals that on both Twitch and YouTube Call of Duty: Black Ops 4 is doing better than Battlefield V, beating it in both views and overall like to dislike ratio. Black Ops 4’s highest concurrent Twitch viewer count was recently marked at 367,000, whereas Battlefield V’s only managed 150,000.

A similar story can be seen over on YouTube, though in a different way. While both Black Ops 4 and Battlefield V videos have millions of views on YouTube, the big difference here is that Black Ops 4 has a much better like to dislike ratio.

The reason for this is actually a reversal of fortune compared to what the Call of Duty series was experiencing just a few short years ago. Big controversy surrounded Infinite Warfare’s plunge further into futuristic territory, which was a move fans weren’t happy with. Now, Battlefield V finds itself in hot water with the developer’s baffling representation drama, made worse by the developer’s arrogant responses to the fans who have voiced their issues.

Blackout is a big reason why Call of Duty’s popularity has skyrocketed, which is the series’ first foray into the Battle Royale mode. This new mode will be launching when the main game does, whereas Battlefield V’s battle royale mode called Firestorm may not be available at launch. This all adds up to a scenario where Call of Duty is shaping up to steamroll Battlefield V this year.

What’s even more impressive here is that GitHyp is also predicting that Black Ops 4 will overtake PUBG in terms of popularity when it launches in October. Considering that game’s massive success, things are looking good for CoD. It’s true that PUBG’s popularity has been sinking in the wake of the juggernaut that is Fortnite, it’s still played by millions daily and is a major player in the battle royale space.

Call of Duty: Black Ops 4 launches on October 12th, whereas Battlefield V was delayed recently until November 20th. Both games will launch for PlayStation 4, Xbox One and PC.