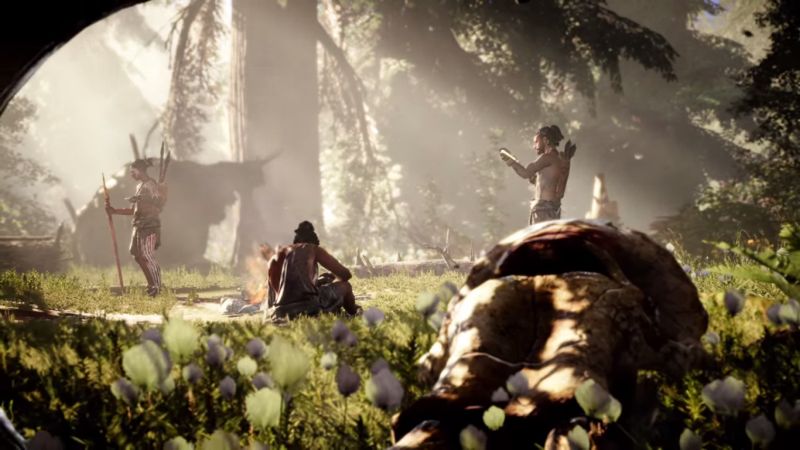 Due to the success of the previous titles in the Far Cry series, it came to no or little surprise that a new title was in the works and it was just a matter of time until they showed us something about the new title.

Yet we were still taken by surprise by the route they took with this title. You would think that the Blood Dragon expandalone was deviating from their original path? Just you wait until you see what they have in store with Far Cry Primal.

The title was at first teased by showing a couple of cave paintings that had the fans and everybody else wondering which setting this new Far Cry will take in.

We even placed bets here at the studio, some saying that it will be another Africa, others that it would be tribes and what not. Needless to say, we all lost that bet since Far Cry Primal is set in the… mammoth era. They will take their player base back to 10.000 BC. Yay… ish?

Yep… it seems that they’re sick of having their players going guns blazing and instead they’re going bows and spear blazing this time around.

Let’s not give them much of a hard time here; it’s quite enjoyable to see studios trying new things. Especially Ubisoft at that, they’ve had a couple of rough launches lately, but let’s not talk about them.

From the looks of it, a lot of the activities you’re going to do will be based around hunting, be it animals or other tribe’s members and just survive.

Here’s an idea (quote me if it turns to be right): what if we’re playing an Assassin’s Creed type of story here and the protagonist in this game is the ancestor of the other Far Cry protagonists and they will all end up being linked somehow in a final game of that “universe”. A man can dream, don’t judge me.