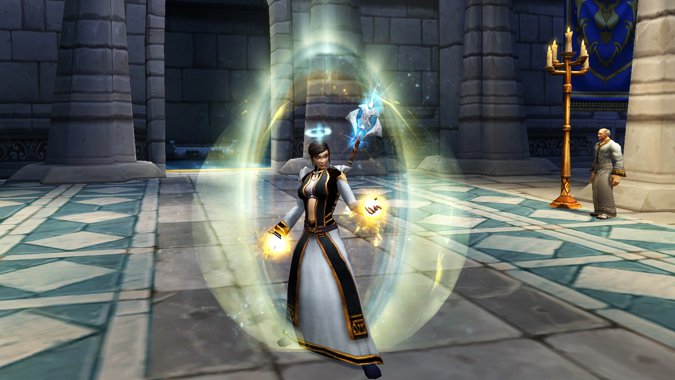 With World of Warcraft Legion, Blizzard committed to regular updates. These updates come in the format of big patches with a smaller “.5” patch in between. Though 7.2.5 is a small patch, technically, there seem to be a decent amount of changes coming. Some of them are fun little events to add more flavor to the World of Warcraft world, while others concern class balance and are significant in the day-to-day performance and competition with other dps / healing / tanking specialization. At the end of the day, even if a spec performs adequately, the community takes issue with balance if any specs fall more than a little behind the top performers. This creates a balancing hell for Blizzard, but they’ve done their best to make sure specializations are performing as well as possible while still retaining the design and aesthetic they intended for the class. The most recent adjustment is to Discipline priests, and the long neglected spec will be receiving some significant buffs that may serve to make the playstyle a little more fluid and effective.

“In particular, Evangelism is an idea we like, but finding serious competition for it as a raid talent might be hard. It probably needs to be against heavier hitters like Power Infusion (especially if that helps it be less of a one-note cooldown stacking build). There will likely be further iteration on talent arrangement to better accommodate the new additions.”

“The spell whose cost is most important for balance purposes is Plea, because it is now the most efficient way to convert excess mana into Atonements. We reduced the cost so it would make more sense when compared against Shadow Mend and Radiance, but have to keep an eye on whether that leaves mana as a reasonable limiter on how much Atonement you can spread over the course of an encounter.”

This may be more of a nerf than a buff, but it may be necessary considering the changes coming to talents and mana costs.

“The changes in the last build helped fix a lot of mechanical issues, but also added a lot of raw power to the spec, particularly in terms of Atonement spread/uptime. And particularly Evangelism returns a lot of the burst-Atonement coverage that currently dominates Disc raiding. That’s not necessarily a problem if everything else about the spec is working well, and it’s good to continue having a bit of a niche that Disc is used to in Legion. But as discussed in my first post, if it’s as easy to blanket the raid as it is on live, that limits the spec somewhat.”

Discipline priests are in a bit of a weird place right now. In the hands of a player with a high amount of skill, Discipline priests put out gigantic healer numbers and mechanically allow other healers to save their raid-wide cooldowns for more dire circumstances. The playstyle of a discipline priest requires complete knowledge of the damage flow within a fight, and is completely preemptive while all other healers are mostly reactive. The difficulty of discipline priest has led to some situations where the top performers are blowing other healing specs out of the water but the average discipline priest is struggling. Overtuning disc performance would further widen the gap on the high end, but I can’t tell you how many awful discipline priests I’ve run into as a Heroic raider. The design of the class is great in concept, but fails in execution if the vast majority of your playerbase can’t play it effectively.

These fixes feel a little more like bandaids than a robust addressment of discipline priest issues, but it’s a step in the right direction. What do you guys think about Discipline priests? Will these fixes be enough, or does Blizzard has a lot more work to do when balancing the spec?