BioWare has been in hot water recently thanks to Mass Effect: Andromeda. In one fell swoop, the company has fallen from grace, and the recent announcement about the “delay” of BioWare’s upcoming title Anthem does not help the situation. However, every cloud has a silver lining, as does this news.

EA’s finance chief Blake Jorgensen recently informed Wall Street Journal journalist Sarah E. Needleman that EA is moving back the release date of Anthem from 2018 to “early 2019,” although Jorgensen claims this doesn’t counts as a delay. “People are trying to create a story,” explains Jorgensen. More importantly, he claims the later release date is not “due to development being behind schedule” as reported by sites such as Kotaku but instead a conscious decision to “get more attention [during] a quieter quarter.” Given that EA plans to release a new Battlefield game later this year, the delay actually makes sense.

The release date of a game can make or break its success. Gamers who have played Overwatch have likely heard about Battleborn, a game very similar to Overwatch that was released around the same time. Overwatch completely overshadowed Battleborn, which made the game sell poorly. Releasing Anthem during a “quieter quarter” when few big games are scheduled to release could easily help the game sell more copies, as it won’t have to go up against stiff competition such as Red Dead Redemption 2, Metro Exodus, or EA’s upcoming Battlefield game; nothing screams embarrassing more than having your game under-perform due to competition from another game you published. 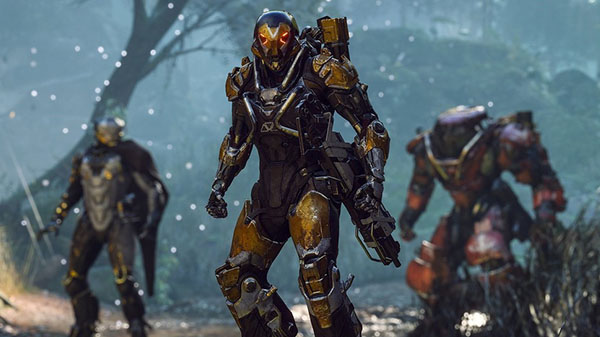 While I disagree with Jorgensen’s claim that Anthem isn’t being delayed (the Cambridge, Merriam-Webster, and Oxford English Dictionaries all define a delay as the act of being postponed, slowed down, or late, which is exactly what is happening to Anthem), I don’t disagree with his reasoning. Moreover, pushing back Anthem‘s release a few months will give BioWare a chance to improve the game with a little extra polish. The company’s previous game, Mass Effect: Andromeda, was a dud. It released in a horrid state full of bugs, glitches, and amateurish character animations. Even if the game had launched without those problems, gamers still would have criticized Mass Effect: Andromeda‘s writing, characters, open worlds, and missions as being the worst in the franchise. Many gamers and critics have pointed out that Mass Effect: Andromeda‘s problems were the result of the BioWare Montreal branch’s inexperience and a short development period. Technically, Mass Effect: Andromeda was in development for five years, but the Montreal team started over from scratch so many times only a year and a half of work made it into the final product. Essentially, Mass Effect: Andromeda was rushed out the door by developers who simply didn’t have enough experience to make a good game.

While we don’t necessarily have to worry about inexperienced developers working on Anthem, if BioWare uses the extra months to make sure Anthem doesn’t suffer from the same glitches and bugs that plagued Mass Effect: Andromeda, I will gladly wait. First impressions are important, and even though Mass Effect: Andromeda is a decent game, the abysmal release state left a bad taste in many gamers’ mouths. As a new IP, Anthem can’t afford to leave a bad impression.

EA sits in the unenviable position of “game publisher gamers want to hate,” which is not good for its developers who just want to make good games. Gamers are already skeptical about EA and BioWare’s ability to deliver a good product with Anthem, especially since loot boxes will be included in the game; people have been wary of any game that uses loot boxes since EA’s Star Wars Battlefront 2 debacle, and now almost everyone expects EA to rush out and gut its upcoming games, including Anthem, for the sake of pushing loot boxes and microtransactions. BioWare faces an uphill, if not sisyphean, battle if it wants to convince people Anthem is a good game. The company needs to take its time to polish Anthem, and it will have this time thanks to the delay. However, if BioWare doesn’t make the most of these extra months and instead turns Anthem into “My Face is Tired 2: Electric Boogaloo,” I will probably lose all faith in the company.

Five Monster Hunter: World Collaborations That Need To Exist
Agents of Mayhem Board Game Seeks to Improve on the Video Game