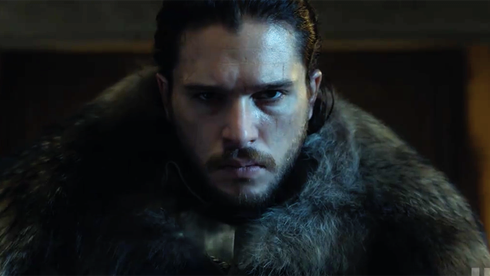 The Seventh Season of Game of Thrones might not be out until this summer but HBO has just released their first official teaser, appropriately titled as “The Long Walk”.

The teaser may be a mere 90 seconds but it manages pack a hell of a lot of foreshadowing into a minute and a half. The video features the three primary contestants for the Iron Throne as of Season six.; Cersei Lannister (Lena Headley), Daenerys Targaryen (Emilia Clarke) and Jon Snow (Kit Harington). All three take the long walk to their thrones, accompanied to a moody rendition of James – Sit down before a gust of wind rushes through the room, plunging all to blackness. The camera then focuses upon Cersei, perched upon the Iron Throne, her breath turned to smoke on the cold air, before suddenly flashing to an image of the Night King.

So all the contenders are there, Jon in the North, Cersei in Kings Landing and Daenerys in the south. The stage is set and the teaser doesn’t give us even a glimpse as to who will ultimately prevail in the game of thrones. What it does tell us is that not only is winter coming – winter has reached Kings Landing, presumably hot on the tail of John Snow.

Game of Thrones Season 7 will premier on HBO on the 16th of July.

Christopher WheatleyFebruary 8, 2019
Read More
The ‘War for the Planet of the Apes’ Begins With New Trailer
Marvel Reveals Logo and Poster for Inhumans