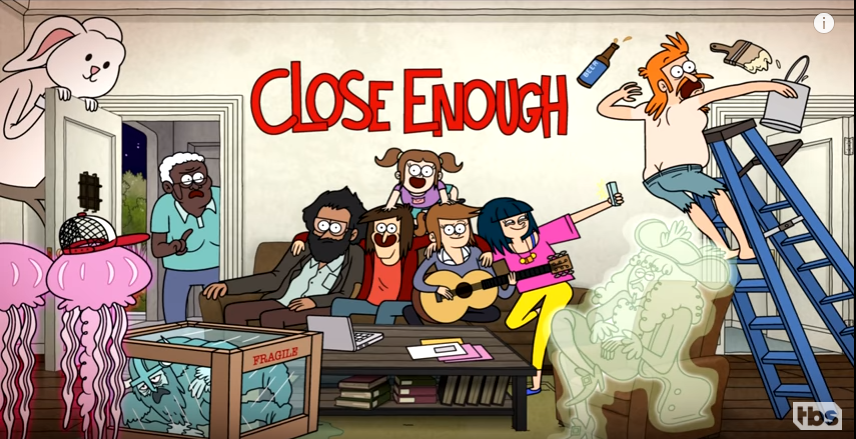 J.G. Quintel, fresh from the finale of Regular Show six months ago, has announced a new TBS animated series Close Enough. Fans of his first series should be pleased– it looks like Regular Show for adults. The trailer features everything one would love about RS, lots of high fives, a lot of ‘yeah-yeah-yeah,’ dancing clowns, trippy visuals, and, of course, mullets and jean shorts. Only this time we can actually see the characters doing drugs, instead of just assuming like before. The trailer shows off the same over-the-top comedy Quintel is known for.

Quintel is an alum of various Cartoon Network shows, including The Marvelous Misadventures of Flapjack (where he worked with CN journeymen Patrick McHale, Mike Roth, Pendleton Ward, and Kent Osborne), and Camp Lazlo. After working on Flapjack, Quintel got to create his first series, Regular Show.

Regular Show first aired in September of 2010. It was a hilariously dumb yet somehow so smart of a comedy, the first episode reeled in millions of viewers– and formed a staple of the weird, trippy animated programs Cartoon Network began to offer, alongside Adventure Time. Over its 6+ year tenure, it never lost that vibe– from Mordecai and Rigby pretending to wrestle a stuffed animal all the way up to Pops fighting a trans-dimensional supervillain, it maintained that critical middle ground between goofy and sophisticated.

Regular Show ran for 8 seasons, uncommon for children’s animation, totaling 261 episodes. Quintel led the show to 5 Emmy nominations. The finale aired earlier this year in spectacular fashion, in a nostalgia-inducing emotional roller coaster of an episode.

The hole left behind by Regular Show will be filled soon enough, as Close Enough looks to be on the way early next year. Quintel is joined by Regular Show alum Sean Szeles (creator of Long Live the Royals), who will serve as Co-executive Producer. Calvin Wong, who also worked on Regular Show, will be again serving as the supervising director under Quintel. The series is a collaboration between newly formed Studio T and Cartoon Network Studios. Close Enough will serve people like me, who grew up watching Regular Show. It’s cool that now that I’m an adult J.G. Quintel goes and makes an adult Regular Show.