Is there a Game Streaming Platform that can actually compete with Twitch and YouTube?

Is there a Game Streaming Platform that can actually compete with Twitch and YouTube?

Without beating much around the bush, the answer is simply yes.

Although these two seem to be untouchable, we have to keep in mind that even the best things in life are. There’s no better example here than Apple. I won’t get into why Apple has lost its shine and how it is not quite the same as it was in its prime. That’s a debate for another day.

But before we get into which streaming platform is slowly rising in the ranks, let’s go over some of the highlights of both Twitch.tv and YouTube Gaming.

Without a shadow of a doubt, Twitch is one of the most popular game-streaming platforms out there and up to this date, it has been one of the top leaders in the industry. And to be honest, it doesn’t surprise any of us.

For starters, Twitch was created for the sole purpose of transmitting gameplays and is heavily focused on helping its users to deliver better streams. It is home to all kinds of game streamers, whether it’s PC, Xbox or PS4. It also has a large community of casino streamers too.

Twitch always tries to make life easier for both its viewers and streamers. For instance, a few years ago, it partnered with both Sony and Microsoft for integration on their new consoles, making it easier for Xbox and PS4 users to stream games with a touch of a button. This made it even easier for newbies to transmit live streaming sessions on the internet with no prior experience at all.

Not that performing transmissions of older consoles like PlayStation 3 and Xbox 360 is any harder though since all you need to have is a capture card to connect video games on a PC, to be able to send the video to the site. But as with anything these days, companies are constantly trying to make things as fast and smooth as possible for us.

With over 100 million unique users and over 2.2 million unique broadcasters a month, it is unsurprising that the two beasts, Google and Amazon, had fought against each other to purchase the company a few years back. In the end, Amazon emerged as the winner, officially purchasing Twitch.tv for $970 million – not bad for a company that was only 4 years old at the time!

We’ve got to admit that all of these factors say a lot about Twitch’s success over time. However, this is not to say that the platform is completely devoid of downsides. In fact, albeit having a strong community on Twitch, there are a lot of cases of abuse and harassment, particularly against female streamers.

One particular scandal erupted last year following a streamer’s hate speech against the female community on Twitch. Both male and female streamers took to Twitter to voice their disgust at the streamer’s comments, one of them actually calling out to Twitch to punish such acts: 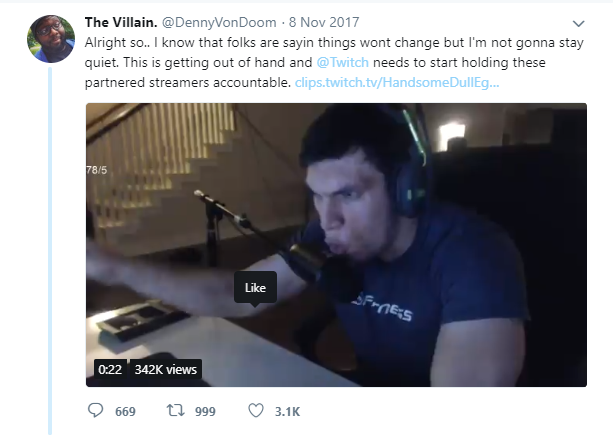 Twitch ultimately did take action, suspending the user for five days, a timeframe which was welcomed with more controversy as some users felt it was a light sentence, considering that other offensive acts committed by other streamers received different bans. This really raised the question of whether there is a proper system in place for transgressors on Twitch, which still seems to be in the works.

Although YouTube might not be so much associated with game streaming as much as other platforms that focus solely on games, YouTube Gaming is actually a highly profitable and widely used platform for streamers, and is considered to be a the biggest competitor of Twitch.

In fact, although Twitch is currently dominating the live streaming space, according to a report by Streamlabs, YouTube grew its monthly active streamer base by 343% last year, as opposed to the 197% growth by Twitch. Whilst YouTube still has a long way to go to reach Twitch, it certainly seems to be making big waves and fast too.

However, as in the case with Twitch, YouTube also seems to be lacking when it comes to communicating its rules and regulations to its users. Just a few days ago, YouTube randomly penalized several casino streamers’ accounts without issuing any prior warning or providing any explanation for its decision.

The whole incident was reported by Casinos.co, a canadian review site for online casinos. According to the site, initially, popular streamers like LetsGiveItASpinwere were told they were being banned from their YouTube accounts for life, whilst other accounts received a 90-day ban.

A similar incident happened last January where streaming channels including LetsGiveItASpin and CasinoDaddy were shut down for the very first time. With subscriber counts of around thirty thousand put together and around a view count of 10 million each, the ban came as a shock as much as a surprise as, once again, neither had received a prior warning about violating the regulations of YouTube.

Instead, they were informed point blank that their account had been terminated. The message shown to the streamers back in January is the same message they received a few days ago:

To this day, none of these streamers know exactly why they have been banned, and it is rather strange that YouTube refuses to give a clear indication of what it is that these casino streamers are doing that is violating the “Terms of Service”.

Although casino streamers are largely based on Twitch, the number of views and amount of profit made on YouTube remains fairly greater, which means that if they were to lose their YouTube account, they would also lose a great deal of their income.

What will happen in the future remains a mystery, but what we know for sure is that, for now, it is a bit of an unsettling time for casino streamers who make their living on YouTube.

But even more so, we also know that both Twitch and YouTube aren’t exactly great at clarifying what is acceptable and what is not on their platform, which seems like they are not taking the necessary precautions to avoid such incidents in the first place.

It’s either grievous transgressors receive little to no punishment (as with what happened with the Twitch user), or are left in the dark as with what actions led them to be punished (as with the case of casino streamer on Youtube).

If only there was one platform that had the decency to outline and enforce them accordingly … or is there one already?

Whilst Mixer is a fairly new live streaming video platform, having launched only two years ago, it is nonetheless making big strides in establishing its own voice and standing out against other up and coming companies. Their idea of “interactive live streaming” that allowed viewers to interact more deeply with their favourite streamers, had already set them apart from the start. 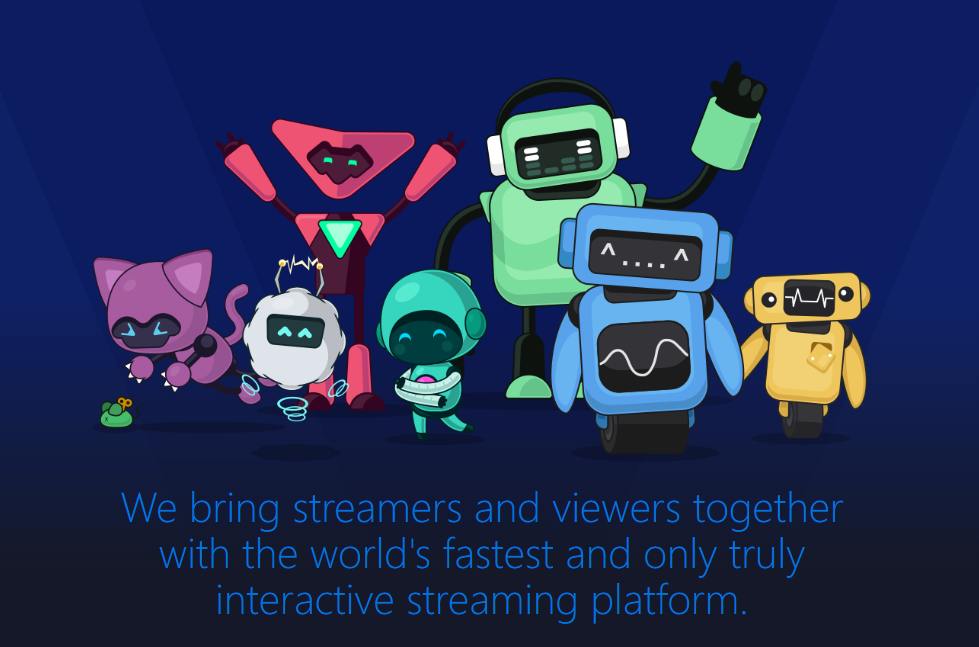 But what most people might not know is that Mixer first started off as Beam. Beam was a very successful startup that revolutionized streaming in a variety of ways. For starters, they were the first platform to provide streamers with Faster Than Light Technology, delivering content with less than one second of latency, as opposed to other platforms which left you waiting for 2-5 seconds.

Secondly, they were the first to provide a built-in cooperative streaming experience on a streaming platform where 2-4 streamers can combine their streams into a single viewer experience, and have one centralized chat.

Needless to say, the functions that the platform currently offers, and the constant iterations to improve user experience plays a very important role in the company’s success. In fact, the company currently has a number of plans in the pipeline such as private messaging, built-in game purchases, Chromecast streaming and real-time video ingest health analytics.

However, the platform’s complete transparency is probably what makes it superior to other platforms. Unlike Twitch and Youtube, Mixer has laid down specific rules of user conduct from the start, covering all sorts of possible scenarios in detail such as harassment, hate speech, threats, impersonation, use of forbidden names, assuming authority, inflicting self-harm, etc.

The list goes on, and for every situation, the company specifies the kind of punishment that will ensue on the individual, i.e. whether it is receiving a warning, suspension, timeout or ban.

In an interview with Polygon, Mixer co-founder James Boehm explained how the company did not receive much criticism for its stricter rules because they were transparent with their users from the beginning, which is something he also attributes to the positive community found on Mixer:

“When we started Mixer, working with streamers and working with content creators, one of their key feedback points was wanting to know what’s going on with the platform,” Boehm said. “‘We want to understand the rules, we want to understand what we can and can’t do.’ When we took to drafting our conduct and terms of service, we wanted to make it really clear what was okay and what was not. That way we could build a community that everyone could partake in; they knew the rules, knew how to behave. That’s translated into a community that has grown and become increasingly positive, which is something people are noticing, as we saw last week.”

In the end, one might argue that Mixer has a much smaller community than the two beasts YouTube and Twitch, and for sure, it is an argument that holds water.

However, seeing how the company started on the right foot and continues to deliver what it promises, we have no doubt its community will keep growing. And, although this means that it will become increasingly challenging for the company to keep up with the growth, from what we’ve seen so far, we have a feeling they’re well prepared for it and will not disappoint.

New Devil May Cry 5 Details On Story, Characters, And Gameplay
Xenoblade Chronicles 2 DLC ‘Torna: The Golden City’ Out This September