Chomping at the Bit for Ancient Dentistry

Chomping at the Bit for Ancient Dentistry

If you’re interested in ancient dentistry, then you’re chomping at the bit over the significant discoveries so far uncovered this year. 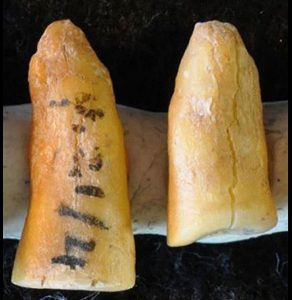 In April, researchers identified the oldest known evidence for filling caries, commonly called cavities. The evidence comes from an Italian site where archaeologists found two incisors belonging to a 13,000 year old person. This date is near the end of the Upper Pleistocene (geologic chronology) and Upper Paleolithic (technological chronology) periods. A team led by Stephano Benazzi (University of Bologna) observed some unusual features on the two incisors. Each tooth has a tiny hole cut through the surface. The holes run far into the pulp chamber, the place where reside blood vessels and nerves. Using microscopic analyses found tiny horizontal striations within each hole. Furthermore, each hold contained foreign residue within.

To Drill or Not To Drill

The holes and horizontal striations are the results of drilling caries. First, the ancient dentist drilled a hole into the tooth to gain access to the cavity. He then scraped the interior of the tooth to remove the rotten matter. Finally, he packed the hole with a filling. The foreign residue is the remains of the filling. composed of bitumen, plant fiber, and hair. This acted not only as a filling, but also as an early form of antiseptic. 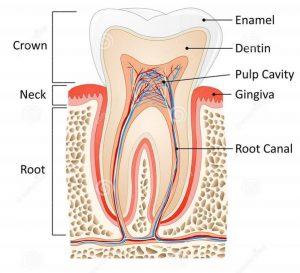 Toothpick, A Most Ancient Tool 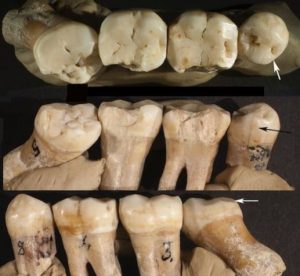 Another discovery provides more evidence for the antiquity of addressing teeth problems. Just two days ago, David Frayer (University of Kansas) announced evidence for rudimentary dentistry by Neanderthals. Researches recovered the teeth from a Neanderthal site in Croatia. The teeth date to 130,000 years ago placing the individual at the transition between the Middle and Upper Pleistocene (geologic chronology) and Middle Paleolithic (technological chronology). The teeth show damage consistent with the use of a tool similar to a toothpick, most likely of bone, wood, or a hard grass stem. The results of the treatment appear as multiple chips, scratches, and grooves on a number of teeth. However, most of the damage is on an oddly erupted premolar that would have caused the individual significant pain.

Aspirin, Made for Tooth Aches

Also in April, another research team published their findings about Neanderthal dentistry. A jaw from the El Sidron site (Spain) has a hole in it caused by a dental abscess. Analysis of the calculus (tartar) on the teeth shows two things. The individual chewed poplar bark which contains salicylic acid. This is the ingredient used in aspirin as a pain killer. Also in the tartar was evidence of the naturally occurring antibiotic Penicillium. This came from the consumption of moss and wild mushrooms. The individual was treating himself for both pain and for infection, something beyond many people in the modern world.

The earliest confirmed evidence for some kind of dentistry dates to 1.8 million years ago. It is a Homo habilis tooth that shows striations typical of a toothpick. Starting around 8,000 years ago, beeswax appears as a common filling in teeth in Croatia, Slovenia, Pakistan, and Egypt. There is also a possible fake tooth made of shell from Egypt dating to around 5,500 years ago. Worth noting is that up until recently (temporally speaking), anesthetics were non-existent. Talk about really fearing to go to the dentist!

This information is valuable because we’re able to have a clearer understanding of our ancestors capabilities. This then allows us to follow the trail of development that has led to our modern marvels. If you or somebody you know has tooth and jaw ailments, then you definitely understand the daily suffering and how important is proper dental care and hygiene.