Phone addiction? Find out for sure using the new Instant Android app 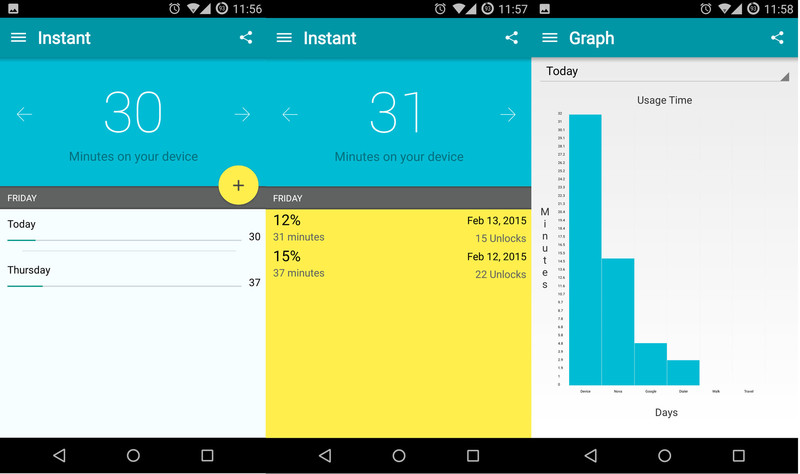 Phone addiction? Find out for sure using the new Instant Android app

Smartphone addiction is becoming a problem for an increasingly large number of people all around the world. While it’s not as serious as most other forms of addiction, this problem can have some negative effects on people who suffer from it. Are you addicted to your smartphone? If you spend countless hours on your mobile device and feel anxious at the mere thought of living without it, chances are that you are. But don’t worry just yet because there’s an app that can help you figure out if you really are addicted, or if you just spend a little too much time than necessary on your mobile device. The app in question is called “Instant” and it tracks your daily usage of both your device and your apps, among other things.

Instant will not flat out tell you that you are addicted to your smartphone or that you should probably use it less, but if it turns out that you spend lots of hours on your device each day, then you might want to consider easing up a little. Aside from tracking you overall device usage, Instant can also tell you how much time you’re spending on Facebook, Twitter, Instagram, or a number of other apps. Actually, this feature might be a bit more useful, as a lot of people are addicted to social networks rather than the devices themselves. Since Instant tracks daily usage for all sorts of apps, it can also tell you how much time you spend playing mobile games each day. In addition, the app keeps track of how many times you unlock your device on a daily basis. Addiction tracker aside, Instant is also a fitness and travel time tracker.

The app is available for free on the Google Play store, however, you can only track your daily device usage with the free version. In order to access app tracking you will have to pay $0.99.