Huawei P8 Lite for only $207 with coupon code on GearBest

Huawei P8 Lite for only $207 with coupon code on GearBest

Huawei has just launched their new Huawei P8 and Huawei P8 Lite in an effort to gain more traction in the U.S. smartphone market. Huawei  has big plans for the North American market and the rebranding of the Ascend name to a more simple format, as seen with the Huawei P8 and Huaweo P8 Lite is just a part of those plans. The Chinese tech giant is striving to get in on the wearable and smartphone market in the U.S., all the while having plans to make the new Nexus 5 2015 or at least one of its variants. (reportedly, LG is making the smaller Nexus 2015 while Huawei is making the phablet-sized Nexus 2015 this year).

The launch of the Huawei P8 and Huawei P8 Lite were received with positive reviews and the two smartphones are already becoming pretty popular across the Americas, Europe and of course, Asian regions. This time around, we’ve prepared a nice deal for our readers, which we hope help out. If you use the P8LITE coupon code on a Huawei P8 purchase on GearBest, you will be able to buy this new smartphone for only $206.99, which is quiet the discount from its original price. Although the Huawei P8 Lite price is at around $240 unlocked, so you’re getting a $30 discount with the coupon code. The Huawei P8 Lite is now available for pre-order and shipping will be free and will commence later this month.

Although the Huawei P8 Lite is not the flagship from the Chinese company, it’s the lighter version of it and it still comes with very impressive specs that will appeal to any smartphone fan out there.The first thing you will notice about the gadget is its 5 inch display, which is still considered as the optimal size for a smartphone. The metal design of the Huawei P8 Lite is similar to the design which we’ve seen on the Sony Xperia Z3+ and even the Galaxy Note 4, but with one notable difference: the bezels on this beast are really thin. That thin bezel on each side gives the Huawei P8 Lite a premium feel and a whole lot of ergonomics. 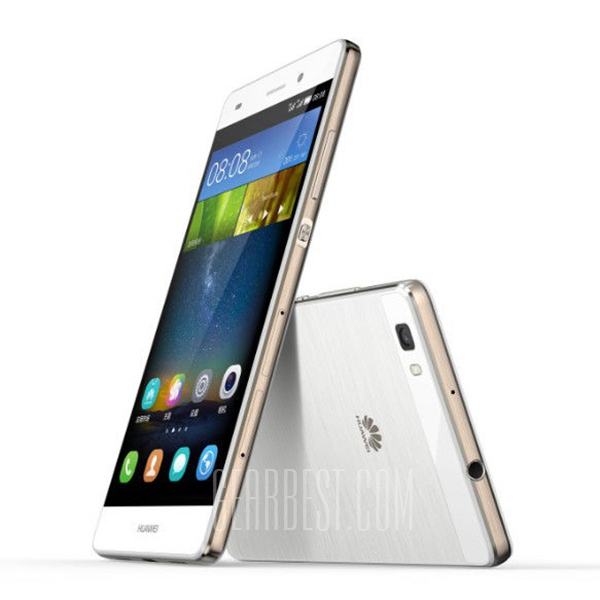 The Huawei P8 Lite has a balanced build, design and performance

Even if it has a 5 inch display, the smartphone doesn’t feel big or clumpy and it could be the perfect device for someone who can’t fit a 5.5 inch iPhone 6 Plus in their pockets. Color options right now are limited, as you can only pre-order the black or white version of the phone, but the ivory white of the variant is rather impressive and looks as premium as any phone out there. Sure, the metal design helps with that quite a lot, but for a $200 price, you’re getting a generous amount of high-end materials in there. But what about specs?

Since the Huawei P8 Lite is just that, “light”, you can imagine that it doesn’t have the high-end specs the flagship does. Still, the most important features are still there. As such, the phone boasts with a 5 inch HD display with a 1280*720 resolution and comes with Android 5.0 Lollipop right out of the box. Lollipop blends in well with the 64 bit octa core 1.2 GHz Hisilicon Kirin 620 CPU, which has preformed rather well in benchmarks. It’s not as speedy as the Snapdragon 810 found in the Samsung Galaxy S6, but it’s speedy enough for any average user.

2 GB RAM and 16 GB expandable storage complete the package of the Huawei P8 hardware. The rear camera of the device is a 13 MP sensor with an LED flash, while a 5 MP camera is placed on the front with extra Huawei-branded camera features. Although the rear camera will not be as good as a Lumia 1020 or Galaxy Note 4 camera, it can definitely compete against sensor found in the OnePlus One and HTC One M8. The rear camera can record 1080p video at 30 fps, which is good enough for the occasional vlog, Vine or Snapchat vid, so that should suffice in my opinion.

The Huawei P8 Lite is advertised as a balanced out smartphone, and so far, we’re mostly convinced of that. The battery within has 2200 mAh of juice, which should be enough for two days’ of medium use, seeing as the 5 inch HD screen won’t be using up too much power. 4G LTE will put a drain on it, but so far, we’ve been pretty happy with what we’ve seen in the battery life department when testing the Huawei P8 Lite. Of course, battery life can always be improved, but the Huawei P8 Lite does it rather well out of the box for the average user. It even has two SIM card slots, in case you find yourself in need of an extra SIM in there.

Overall, even if the Huawei P8 Lite isn’t the flagship of the Chinese company, it still boasts with exemplary specs and lies on the borderline of mid-range and flagship smartphones. This device could be the perfect daily driver for any average user, and power users might also be happy with it, if they’re willing to compromise a bit on battery life and display resolution. The phone itself is only 7 mm thick and weighs about 130 grams, which make its design lightweight and easy to use, always a plus for any smartphone.

If you’re looking for a new daily driver and thought that Huawei made a good impression with the Huawei P8 and Huawei P8 Lite, we definitely recommend in investing in one of them. The Lite version will of course suit average users more, while the flagship will be more suitable for power users. In any case, these new releases have to be checked out, because there’s a lot of potential in each of them. We’re curious about your opinions, so feel free to sound off in the comments below, telling us about your experience with Huawei and your opinions about the Huawei P8 and P8 Lite.