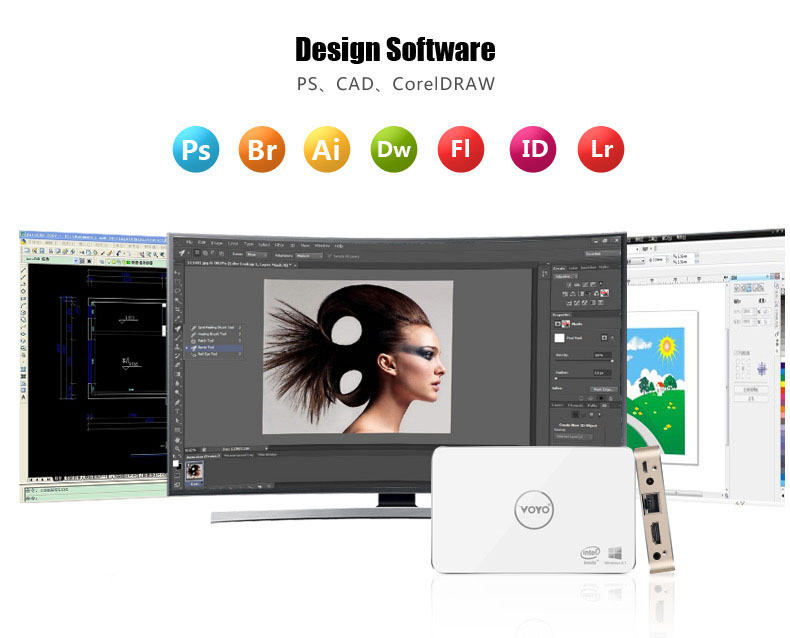 Although the Mini PC as a concept is picking up slack and it’s becoming a bit more popular among entry-level users or traveling office workers, most of the devices out there don’t have the possibility of upgrading to the new Windows 10 OS. The Voyo V2, the newest Mini PC from the company, stands out in the crowd with one of the most sought-after features of Mini PCs: upgradeability. Indeed, the Voyo V2 supports and is supported by Windows 10, and those who use the device will be proud owners of genuine licenses. Otherwise, the Voyo V2 is pretty standard for a Mini PC, but when checking it out both its price and features and holding those against each other, you may as well discover a very well-balanced gadget in the end.

The Voyo V2 Mini PC is a compact, multifunctional device. Although its main purpose is to be a computer running a full OS, namely Windows 8.1, that can be connected to any display in the household, the Voyo V2 serves a secondary purpose: portable power bank. Since the Mini PC is a device geared towards travelers and can be considered a holiday item, it would have been reckless not taking advantage of that scenario and adding a bit more value to the gadget.

On the road, the Voyo V2 Mini PC can supply your gadgets (regardless of operating system) with its 8000 mAh battery.  This power bank function only adds to the versatility of the device and those of you who see the Mini PC as the perfect device to hold important documents, work and accounts, to have at your convenience, no matter where, will surely appreciate the extra benefit of its large battery. I’ve personally found that the Mini PC can add a lot of convenience to a hotel room, for example, or any office gathering and environment that one might find themselves in.

The Voyo V2, although complete with a genuine Windows 8.1 full OS that is upgradable to Windows 10, is not that expensive. It’s definitely not the cheapest in the lot, but it lies in the middle of the spectrum if I were to guess. Compared to the Ainol Mini PC for example (watch out for that, unboxing and reviews coming up), which costs $98. the Voyo V2 price is set at $120 and you can get it at GearBest. While the price difference is small, the added upgradeability is, in my mind, worth the extra investment.

Ports and features of the Voyo V2

When it comes to features and performance, aside from the software (which comes with a Microsoft Office 365 Personal subscription for a year), the Voyo V2 is outfitted pretty well. It’s as small as a smartphone, yet it packs the power of a notebook. It comes with its own Baytrail T Z3735F processor, with Intel GPU, 2 GB RAM and 32 GB internal storage, with a microSD slot also available. It can do both 1080p and 4K UHD video, so you can enjoy those awesome Youtube videos without a problem.

As most Mini PCs on the market, the Voyo V2 comes with Wi-Fi, Bluetooth, one microUSB port, an Ethernet port, HDMI output, audio jack and one USB 2.0 port. The features, while not too impressive, are gathered into a small, lightweight design, and manage to create a device that will literally fit in your pocket. Personally, I appreciate the price point and the Windows 10 upgradeability, and I think that is already worth the money. The features and performance are, what one would call “standard”, with an average battery life of about 4 hours,