Headphones that beam music straight into your head? You better believe it 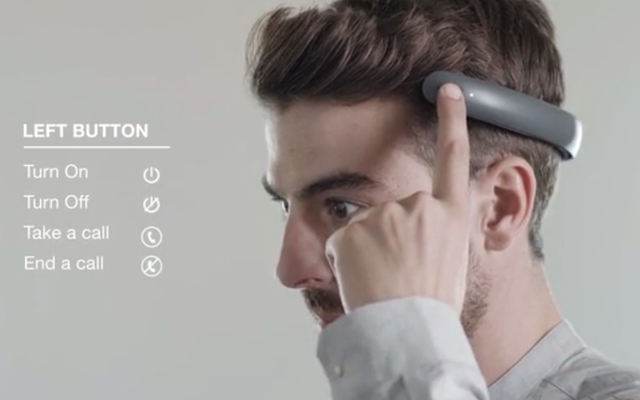 Headphones that beam music straight into your head? You better believe it

We all love headphones, but sometimes you also want to hear what’s going on around you in addition to listening to your favorite songs. Instead of just lowering down the volume, would if I told you that you can wear a device that lets you listen to music and doesn’t cover your ears? Sounds a bit counterintuitive, but there’s apparently a company that promises to offer exactly that. The company goes by the name of Studio Banana Things and its “ear-free headphones” are being called Batband.

Just as the name suggests, this device is more like a band than an actual pair of headphones, and yet, it fulfills the exact same purpose. Batband must be placed around the back of the user’s head and be paired via Bluetooth with a smartphone or another smart device. According to Studio Banana, the futuristic looking pseudo headphones are able to beam the music directly into your inner ear, thus leaving your outer ear free to pick up sounds from your surroundings. What this basically means is that you can go on about your daily business and still listen to music at the same time. I can only imagine that the feeling must be pretty strange, but on the other hand, it’s like your life has its own personal soundtrack all the time. I don’t know about you, but that definitely sounds pretty sweet to me.

You can find the Batband on Kickstater and maybe even chip in if you want to reserve a unit before it launches next year. The headphones have already surpassed the funding goal of $150.000 and it took under 1000 backers for that to happen. The crowdfunding campaign will continue to run for an additional 42 days until October 28th.

iPhone 6S Plus orders exceed expectations
Surface Pro 4, Lumia 940 and Band 2 to be official on Oct. 6