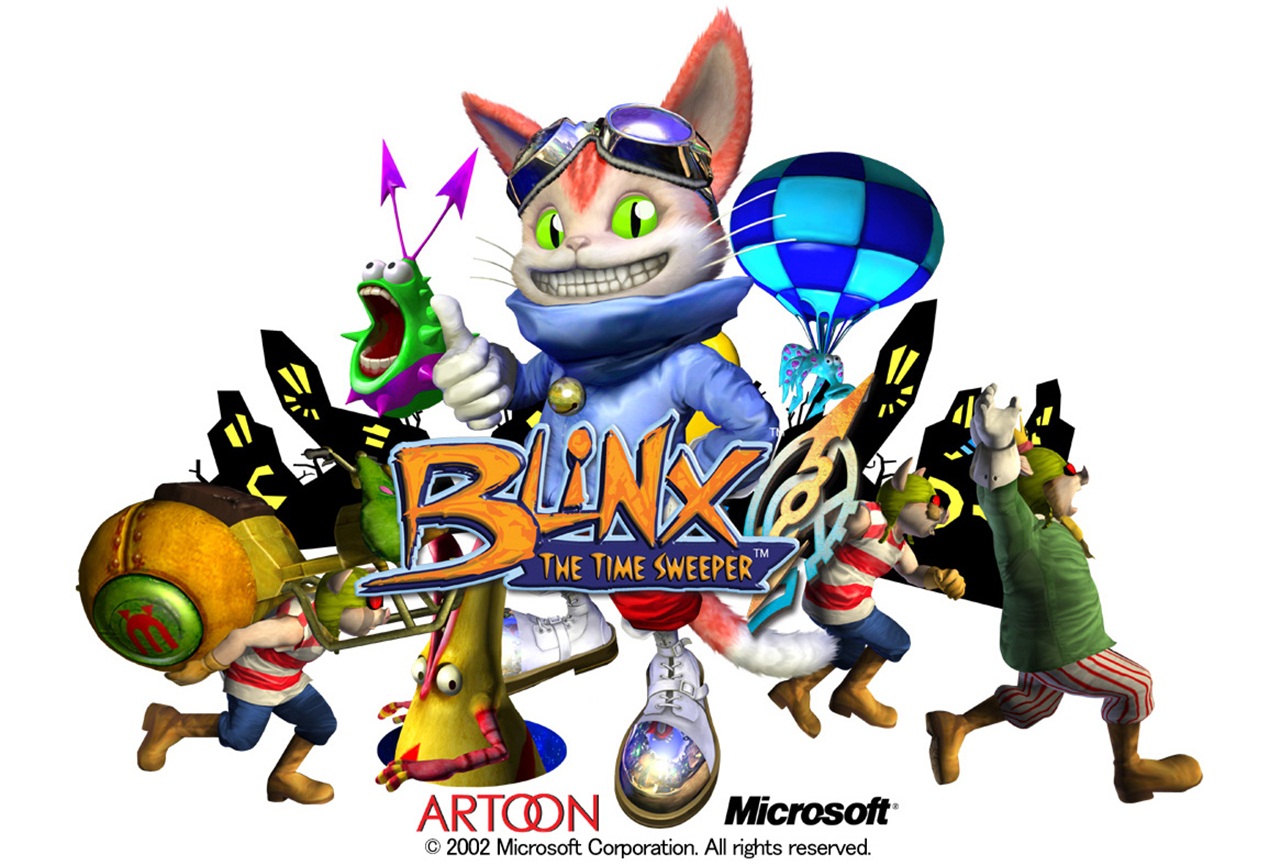 In 2001, Microsoft released its first ever gaming console, the Original Xbox (not to be confused with the 8th generation console the Xbox One.) During the first year of its initial release, Microsoft was still suffering from an identity crisis; in terms of who represented their console and their namesake; during that time Nintendo was known for Mario and Mario was their mascot, Sega had Sonic the Hedgehog, Sony had Crash Bandicoot, Capcom had Mega Man. Yet, Microsoft still had to decide on who their company mascot would be? Many gamers saw Master Chief from the Halo franchise as the official face of Microsoft, however due to the excessive violence that was used in Halo, Microsoft did not want the main protagonist of Halo representing them as a company. Instead, Microsoft decided to have a more kid-oriented mascot, thus the creation of Blinx.

Blinx: The Time Sweeper is a 2002 platformer released as an original Xbox exclusive and is one of the few 3D platformers released on Microsoft’s 6th generation console; it was developed by the now defunct company Artoon, and published by Microsoft Game Studios. The main premise of the game has players control an anthropomorphic cat named Blinx as a time sweeper, with the ability to manipulate time. The main story of the game focuses on Blinx saving the world and fighting against space pigs known as the Tom-Tom gang along with the Time Monsters in each level.

Visually, the game is gorgeous. For a 2002 game, Blinx The Time Sweeper really showed how much power the original Xbox can handle for its time. The graphics in this game are so stunning that anyone who is not familiar with the game could easily mistake it for an Xbox 360 title. Unfortunately this is one of the few interesting thing the game has to offer. Blinx had so much potential to be something and I felt that Artoon failed to fully capitalize on it. The enemies’ appearance and design and even Blinx himself feel like they don’t fit in the game at all. The time monsters felt more like something out of Bubsy 3D. 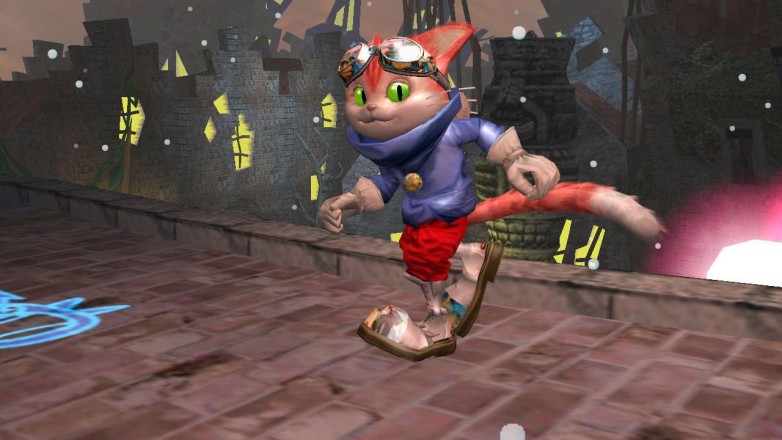 The soundtrack of the game is very disappointing, the music just doesn’t feel like it belongs in the game at all, and after an extended period of time the music will get burned into your head for weeks and you will get sick and tired of it to the point you will either want to mute the sound on your television and carry on, or you just want to shut off your Xbox completely and call it a day. The only music that actually felt like it belonged where it was placed was in the boss battles.

The game is divided into 9 worlds, each world having 3 stages and a boss battle. In each stage you have to defeat a certain amount of time monsters in order to progress. Here’s the curveball though: each stage must be completed within 10 minutes or less, and after the first 2 worlds you don’t feel like fiddling with time management as most enemies on each stage (with the exception of the boss battle for obvious reasons) will take 1 to 2 hits maximum to defeat. This becomes a problem with world 3 and onward not only do the enemies increase, but they become more difficult to defeat, taking minimum 2 hits to defeat. Blinx’s misleading character, although presented as speedy critter, is slow and doesn’t help with completing levels. The fact that his movements don’t match the speed at which he is running is just pure laziness on the designers’ part, considering that even Jak’s speed and movements from Jak and Dexter are above the performance Blinx was given in The Time Splitter. 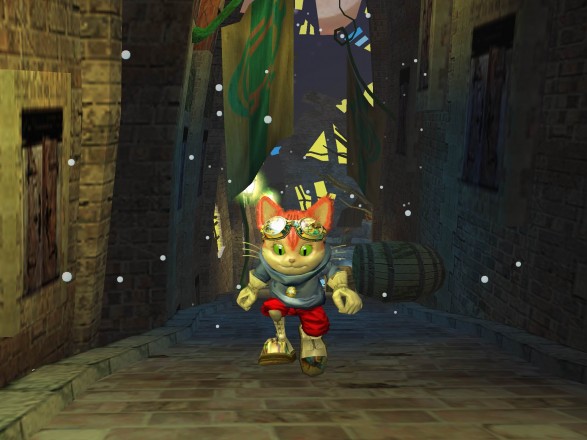 The way you fight enemies in the game is by using a vacuum cleaner to sweep up garbage and then shoot the garbage towards your enemies. In the first stages of Blinx Time Splitters you can only hold up to 5 in your inventory, but you can increase your stock for trash and time controls by purchasing some at the shop, as well as new sweepers which can either hold heavier trash, or  perform special abilities. However, the problem with the currency in the game is that gold is very scarce in each level. In each world you can get between 1,000-2,000 gold, forcing you to return to previous stages and worlds to acquire more gold, and considering the fact that the cheapest thing at the market is 200 gold, which pays for a retry (and considering the fact you can actually obtain a retry in the stages it’s considered a waste of your money), this game will force you to revisit other worlds so you can save up to get the equipment you need as holding more retry’s, time controls and having a certain sweeper will be essential later in the game.

There are time crystals in the game which serve the purpose of helping you actually control the passing of time.  In order to get a time control you must get at least 3 of the same time crystals, depending on what type of control you’re looking for. Blinx has six time controls: Rewind, Fast Forward, Pause, Record, Slow, and Retry. The time crystals are important in the game as certain puzzles require a certain time control to be used in order to proceed forward in the stage. You can collect crystals by either picking up ones that are laid out in the stage or you can get some from defeating time monsters. 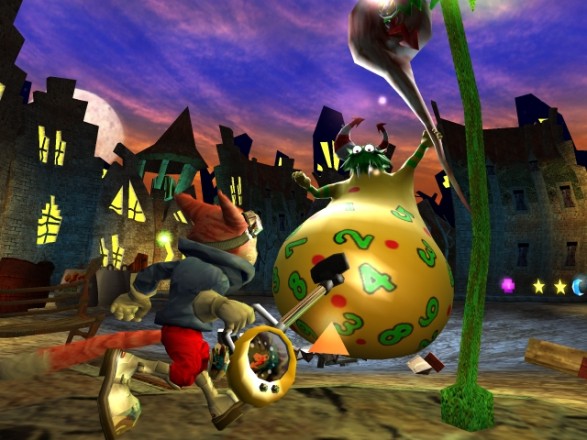 The retrys work as the player’s health throughout the game, each time Blinx is hit by an enemy or falls down a cliff you lose a life and you restart from where you last were prior to losing a life, which can be infuriating because the camera in the game is such a pain in the ass that sometimes the game will respawn you in a particular spot which can sometimes put you in a sticky situation not to mention any enemy you killed prior to you losing a retry will revive again. This makes time management more difficult for gamers, and considering the fact the game is hard enough as it is having a difficult camera doesn’t make your life any easier.

The combat in Blinx is very minimal: all you do is sweep trash and shoot it at the enemies and you just stand there…sweeping trash you can’t move Blinx he just stands there like a sitting duck. So if you’re expecting to be able to whack your sweeper at a nearby enemy don’t be disappointed because a melee feature in the game is nonexistent. The shooting mechanic doesn’t always shoot directly at an enemy and there is no aim feature in the game. Blinx  The Time Splitter wouldn’t be as difficult as it is if they were to add at least a melee feature or the ability to aim but because this game lacks so much and the controls don’t always work, 75% of the time leaving you frustrated with them. The fact that after an initial hit to an enemy, you have to wait before attacking again or waste ammunition does not help the case of Blinx. 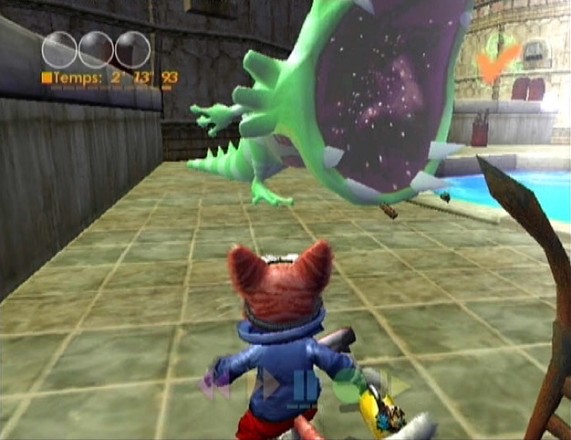 Blinx had an interesting concept for a platformer game and in all honesty it could have given competitors like Rachet and Clank or Jak and Daxter a run for their money. Jak and Daxter was fast-paced and was an open world platformer with no loading screens, Rachet and Clank had amazing melee and weapon mechanics. Both these games also had NPCs you could interact with as well as cutscenes that gave you validation that you were actually making progress….Blinx doesn’t offer any cutscenes except for the opening and ending cutscenes. There is not cutscene when advancing to a new world which can discourage gamers and doesn’t show them or update them on how much progress they have actually made.

Overall Blinx: The Time Sweeper is not Bubsy 3D or Sonic ’06 bad, but it isn’t a very good game either. Had Artoon actually put more effort into this game perhaps Blinx would have been a popular platformer exclusive for Microsoft consoles similar to  how the PlayStation has platformer exclusives like Ratchet and Clank, Sly, Uncharted etc. But this game lacks a lot of what makes platformers fun and adventurous. It’s not as fun as say any of the Sony platformers that were released around the same time or even as fun as Super Mario 64 but it is fun to some extent. It’s not my favorite platformer but it is enjoyable in a traditional platformer way, with that being said I only recommend this game to gamers who are very good at platformers, or enjoy a challenge as this game is not a piece of cake.